Home > Basics > The Basic Rules of a Gluten Free Diet

There are so many reasons to begin eating a gluten free diet. Whatever your reason is, it’s the right one. Whether you have a “gold standard” diagnosis of celiac disease, believe you have gluten sensitivity or another form of gluten intolerance, are allergic to wheat, or just plain feel better when you don’t eat gluten, you are free to choose to follow a gluten free diet.

Never feel obligated to ask for permission or forgiveness. I have been cooking and baking gluten free since 2004, and developing and publishing gluten free recipes since 2009.

No more mile-long lists of ingredients in recipes. Since then, I have developed other blends for some more specialized purposes, like a blend for more delicate recipes like crepes and pancakes, and one for yeast breads with real chew and proper texture—and hundreds of gluten free recipes.

Over the years, I’ve learned a few things along the way about the basics of a gluten free diet (what exactly is gluten? What foods are naturally gluten free?), celiac disease, gluten sensitivity, and even which gluten free snacks are best to stash in your pocket or purse for “emergencies.”

My children consider the first pang of hunger to be an emergency, so, you know. I’ve broken this guide down into a few basic categories, so feel free to skip to the portion most important to you, and bookmark it to return to for reference.**

**Disclaimers: All of the content on this website, including this page, is for educational purposes only and does not constitute medical advice, which I am not in any way qualified to give. All product facts and information, particularly information about processing and labeling, is specific to the United States.

Product links contain affiliate codes. If you click one of the links and make a purchase, I will make a very small commission on the sale, at no extra cost to you. 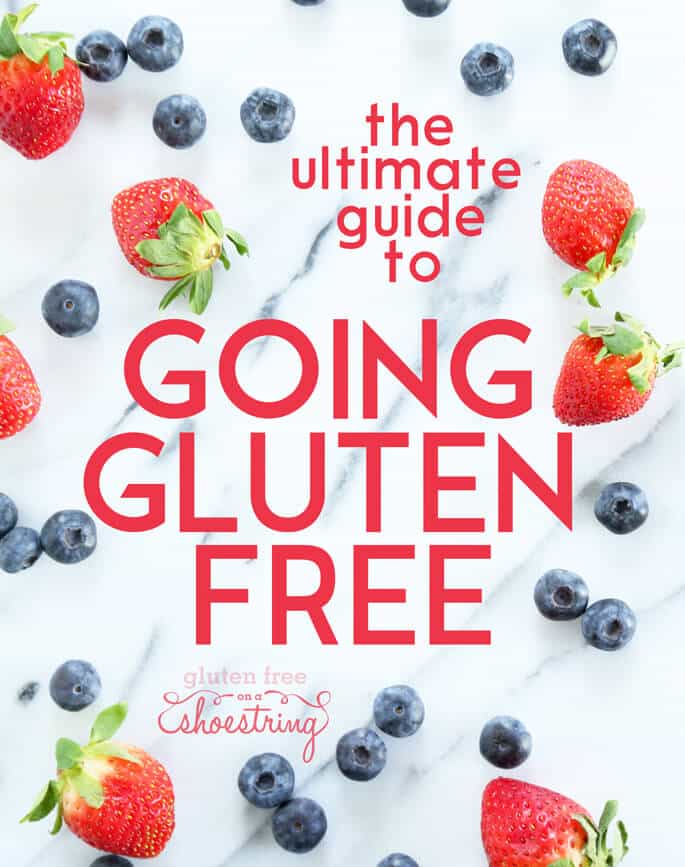 Gluten is the protein found in wheat, barley and rye. Varieties of wheat are Einkorn, durum, kamut, semolina, spelt and triticale (a hybrid of wheat and rye).

Einkorn is the most ancient form of wheat, and the only variety that has never been hybridized. For people who are gluten intolerant or allergic to wheat, it’s a distinction without a difference.

What is celiac disease?

Celiac disease is an autoimmune disease that is triggered in affected individuals by the ingestion of gluten, creating an immune reaction in that person’s body that causes the flattening of the villi in the lining of the small intestine, which is responsible for food absorption.

There are quite literally hundreds of possible signs and symptoms of celiac disease (see CureCeliacDisease.org, the Celiac Disease Center at University of Chicago Medicine). Many of them are intestinal, such as abdominal pain and bloating, vomiting, diarrhea and/or constipation and are often but not always accompanied by weight loss, including failure to thrive/short stature in children.

They can also be as wide-ranging and difficult to quantify as “brain fog” and joint pain, as well as anemia that does not respond to iron-replacement therapy. Sometimes there are even no outward symptoms of celiac disease, which can make it particularly difficult to diagnose.

The “gold standard” diagnosis of celiac disease is an endoscopic biopsy of the small intestine (See CureCeliacDisease.org, the Celiac Disease Center at University of Chicago Medicine). The only treatment for celiac disease is a strict gluten free diet.

What is gluten sensitivity?

Non-celiac gluten sensitivity is characterized by a digestive reaction to gluten which may be immune-related but for which there is currently no diagnostic test. The Celiac Disease Center at University of Chicago Medicine is actively researching this issue.

What foods are naturally gluten free?

What foods are not gluten free?

How To Begin a Gluten Free Diet:

If you're in the earliest days of a transition to a gluten free diet, you may feel overwhelmed. I promise that it will all be okay. Just follow these simple rules for preparing your kitchen and purchasing a few packaged foods. Then you can buy some simple gluten free baking ingredients and bake something simple, when you're ready. From there, the sky's the limit!

If you've made it this far, perhaps you're ready to learn more. The perfect next step is our Beginner's Guide to Baking Gluten Free, which should give you the confidence to begin baking everything you're missing, now that you're baking gluten free.

I have written 5 gluten free cookbooks, all of which have introductory chapters that walk you through how to cook and bake gluten free with success, including a full explanation of ingredients used.

This blog, Gluten Free on a Shoestring, is also a great complement to this guide to the gluten free diet and the cookbooks. I update it regularly, so sign up for my free email list to be notified when there's something new.

There is a lot of other really useful information on the web on this topic. I have already linked to much of it, but here are some of my other favorite resources on a gluten free diet:

Gluten free has also been in the news more and more. Here are some articles you might find interesting (or infuriating, depending upon the article):