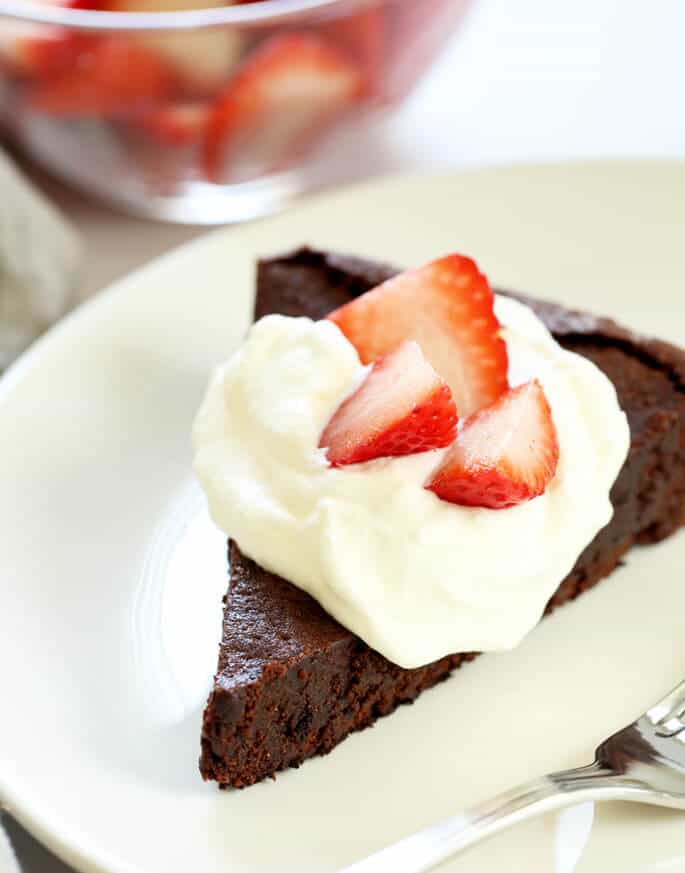 A flourless chocolate cake is one of those restaurant-style desserts that it’s tempting to think is too fussy to make at home. It’s naturally gluten free, and easy to whip one up at home anytime.

How do you make a flourless chocolate cake?

Although of course I tell you exactly how to make a flourless chocolate cake in the recipe below, the general idea is to melt chocolate and butter together, then set them aside to cool.

Whip egg whites until they form peaks. Beat some whole eggs with sugar and cocoa powder, then mix in the melted butter and sugar. Finally, fold in the whipped egg whites.

Yes! Unless one or more of the basic pantry ingredients that you source contains gluten, it will be naturally gluten free.

How do you store a flourless chocolate cake and do you refrigerate it?

Is it really flourless?

Unlike some other desserts that some like to call “flourless,” this decadent chocolate creation is actually without flour of any kind. There are no grains or anything ground into a flour-like powder at all used in the making of this cake.

If it calls for almond flour, it’s not flourless. Oats or oat flour? Again, not flourless. If you have some chocolate, butter, eggs, sugar and cocoa powder, you can have flourless chocolate cake.

Since there are so few ingredients in this recipe, the quality of the chocolate and cocoa powder matters quite a lot. Use the best you can come by.

Using Dutch-processed cocoa powder will make for a smoother, less acidic cake. And remember that the melted chocolate is the star of the show, so its quality will shine through as well. What pan, what method?

This recipe doesn’t call for a water bath or any other sort of fanciness. It’s not a cheesecake, but it’s going to fall and crack a bit after it’s baked. It’s meant to. I promise.

You can make the cake without beating the egg whites separately and folding them into the batter. Simply beat the sugar egg whites and eggs vigorously until pale yellow in color before whisking in the cocoa powder and the melted butter and chocolate. Your cake will be more dense and even more fudge-like.

The truth is, for flourless chocolate cake, for cheesecake or anything else, I hate using springform pans. I’ll do almost anything to avoid them.

They tend to leak, they’re confusing to assemble if you’re not really on your game (which is the top, which is the bottom, for crying out loud?), and they’re just crazy hard to clean. But for this cake, you’re best off using one.

If you don’t have a springform pan, though, just use a round cake pan.I do recommend that you chill the cake for at least an hour in the refrigerator before transferring it carefully to a serving dish.

That’s true whether you use a springform pan or not. Once it’s chilled, the cake will become much more firm and stable. If you’ve never made a flourless chocolate cake before, you may find its tendency to rise like a regular cake and then fall abruptly after it is removed from the oven rather alarming. No worries. That’s what it is meant to do.

If you do use a springform pan that is dark in color, start watching it closely at 20 minutes as it will have more of a tendency to burn. You’re less than an hour away from creating the ultimate restaurant-quality, naturally gluten free flourless chocolate cake in your very own kitchen.

If you’d like to make this cake without dairy, it’s relatively easy to find a dairy free dark chocolate. The only other dairy containing ingredient is the butter in this cake, and it can easily be replaced with Earth Balance buttery sticks. The cake may rise a bit and fall a bit more, due to the extra moisture, but it will still be rich and fudgy.

Once this cake is dairy free, it’s a short step to making it vegan if you replace the eggs. However, that’s a tall order.

There are not only three eggs, but two egg whites in the recipe. The two egg whites can possibly be replaced by aquafaba, although I haven’t experimented with that replacement.

Generally, my favorite replacement for whole eggs is one “chia egg” (1 tablespoon ground chia seeds mixed with 1 tablespoon lukewarm water until it gels). But I generally only recommend replacing up to 2 eggs per recipe with chia eggs.