How are these gluten free pretzel rolls are different?

Why would anyone call these “bretzels”? Pretzel is a perfectly fine name. These rolls are so nice and crunchy-chewy on the outside, tender and almost tangy-sweet on the inside.

This yeast bread dough is in the batter dough style of gluten free bread, so it’s a wet dough. But there’s something about the combination of enrichments like butter and buttermilk powder, plus egg whites, that makes it nearly as easy to shape as gluten free dough made with our gluten free bread flour.

How to make and shape the dough

Then chill the raw dough in the refrigerator for at least 30 minutes, and up to 3 days. Be sure it’s in a well-sealed container, though, or it will dry out.

Tips for getting your yeast roll and bread dough to rise

On the day you’re planning to bake the rolls, be sure you have enough time to allow them to rise, and then bake. You’ll divide the dough into 8 portions, roll each into a ball, then flatten a bit into a disk, which will create a shape that’s perfect for sandwiches.

If you struggle to get your yeasted bread dough to rise, here are a few tips. Be sure you’re using a proper gluten free flour blend, first and foremost, and measuring by weight, not volume (even water!).

Your dough must have the right amount of moisture—and better to have it too wet than too dry. If it’s too dry, the yeast will not be able to activate and create a rise.

Don’t add any more flour than necessary to the dough during shaping, which will dry out your dough. Too much flour is essentially serving to reduce the relative amount of water in the recipe, which is called its hydration ratio. Too low, and your dough won’t rise.

So is patience and a keen eye

If you’re impatient for your yeast bread dough to rise, you might run into trouble. Yeast is alive. We can’t control it. All we can do is create an environment that encourages it to grow. Kind of like raising a child?

Rising will take longer in a dry, cool environment, and less time in a warm, humid environment. Do not place it in a heated oven, to any temperature, to rise or you risk killing the yeast.

“Overproofing” is possible, though, so you must keep an eye on your dough. But it’s a matter of rising too much, not rising for too long.

If the rise begins to break through the surface, and creates a cratered or pock-marked appearance on the outside, it’s gone too far and will be fragile. That will make it difficult to boil.

Why boil pretzels and pretzel rolls?

After they finish rising, you’ll boil the rolls in a baking soda bath, which is just water with some baking soda. The “right” way to boil bagels is in lye, but that’s just a bridge too far. It’s dangerous and scary and totally not necessary for our purposes!

Boiling them in a baking soda bath will help the rolls brown in the oven, create that crisp-tender crust, and reduce the “oven spring,” or amount the rolls rise in the oven. That keeps the inside from becoming too airy.

If you’ve overproofed your raw dough, the rolls will be quite difficult to boil. You might consider only boiling the ones that don’t seem too fragile, brush the rest with melted butter or an egg wash, and hope for the best!

Should you salt the tops of your rolls?

I don’t usually salt the tops of the rolls until soon before serving. Adding salt to the outside of the rolls draws moisture out of the rolls, which causes them to go stale more quickly.

There is only a bit of dairy in this recipe, and it should be relatively easy to replace. For the butter, my favorite vegan butters (Melt or Miyoko’s Kitchen brand) would likely work just fine. Even Earth Balance buttery sticks should work, but cut back on the salt by half since they’re quite salty.

Buttermilk powder really helps add richness to the rolls, similar to the butter. In its place, you can try using coconut milk powder.

The two egg whites called for this in this recipe help provide structure to the rolls. If you can’t have eggs, you can try replacing the egg whites with an equal amount, by weight, of aquafaba, which is the brine from a can of chickpeas.

I haven’t tried this swap, though, so I honestly don’t know how well it would work, if at all. If you do try it, I recommend beating the aquafaba until foamy with a whisk before adding it.

There is no substitute for yeast in this recipe. If you can’t use yeast for any reason, you’ll need a yeast-free recipe, like our yeast free gluten free rolls.

I always get a lot of questions about cream of tartar and apple cider vinegar, since they seem like unusual ingredients to some. They both help activate the baking soda in the rolls, and are useful especially in gluten free bread baking.

Cream of tartar is available in the spice aisle of most grocery stores, and is worth purchasing when you see it. If you don’t have it, you can try using 1 teaspoonful of freshly squeezed lemon juice.

In fact, you can try using more lemon juice in place of the apple cider vinegar as well. Otherwise, another white vinegar is fine. 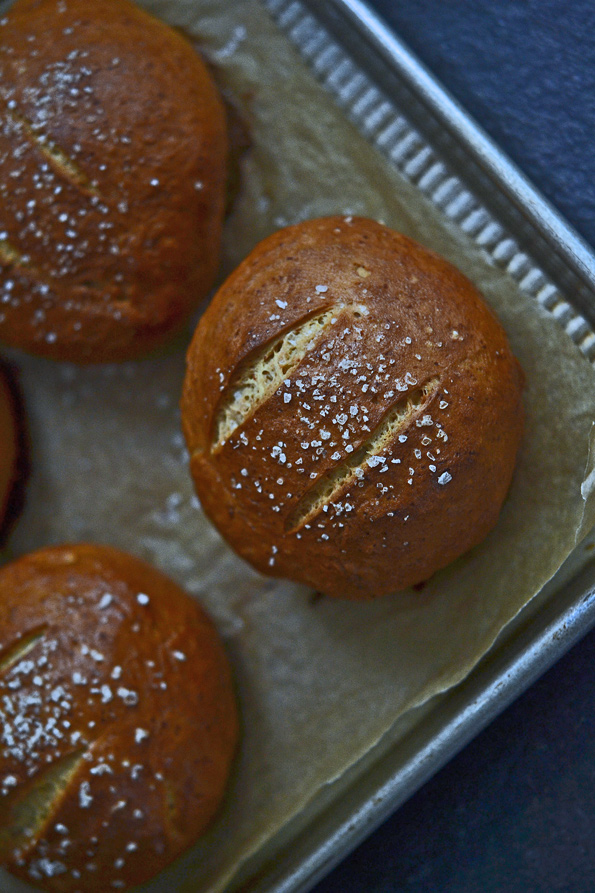