Gluten free chicken gyros are perfect served with an easy make-ahead tzatziki sauce, served on fresh naan bread. Or try them in pita! 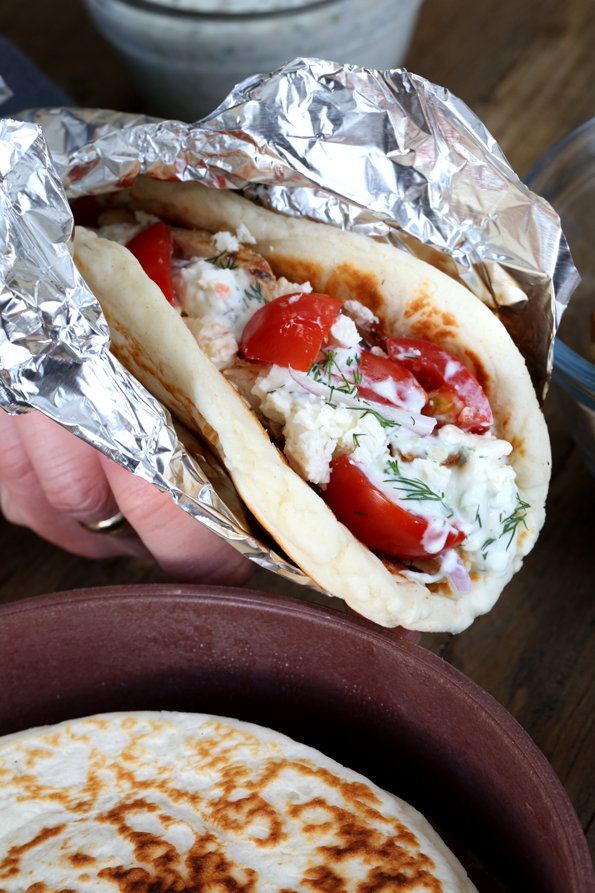 I used naan bread, which is Persian in origin, to make Gluten Free Chicken Gyros, gyros being Greek in origin. I guess this is what they mean by fusion food? Well, since I am neither Persian or Greek, I figure I can do as I like.

You could also try serving these chicken gyros on pita bread. They would also be fabulous on these Soft Gluten Free Tapioca Wraps. But I do have my reasons for choosing the recipe for Naan Bread from Bakes Bread. 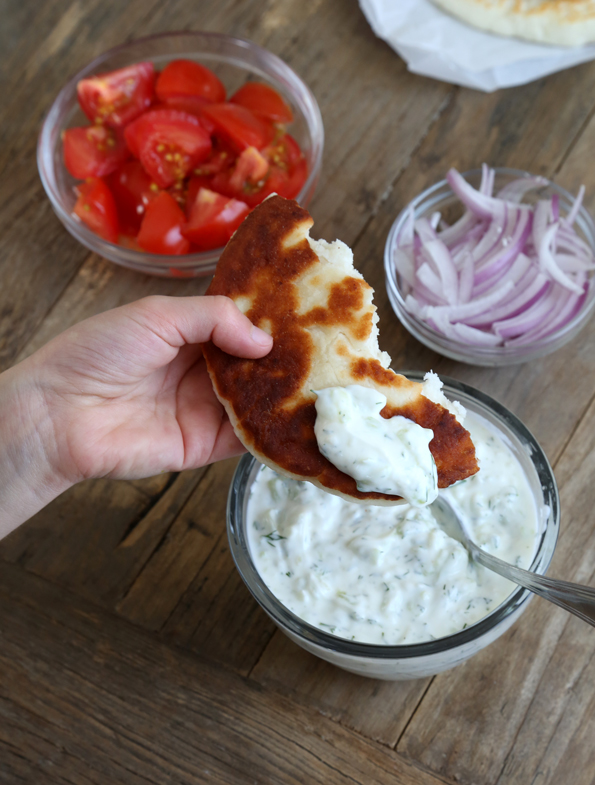 You see, gyros are served with tzatziki sauce, made with yogurt. And naan bread? Made with yogurt as well. It keeps the bread super soft and tender.

Instead of frying the naan bread in ghee, as I usually do, I cooked the bread in a lightly-greased cast iron skillet, which yields a much more pliable bread. Perfect for piling on all the gyro fillings. 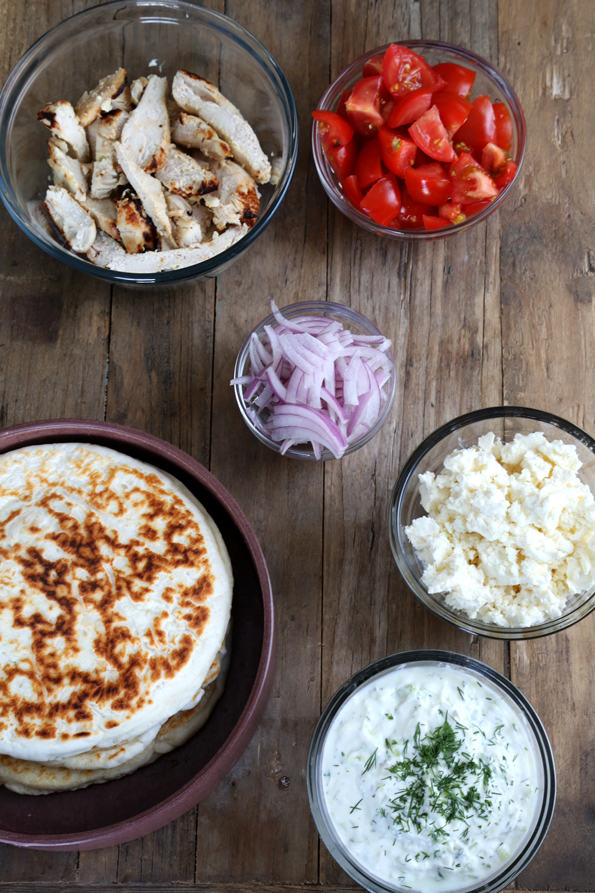 I also make my tzatziki sauce with dill. Is that illegal? I don't know. But I really love it that way. 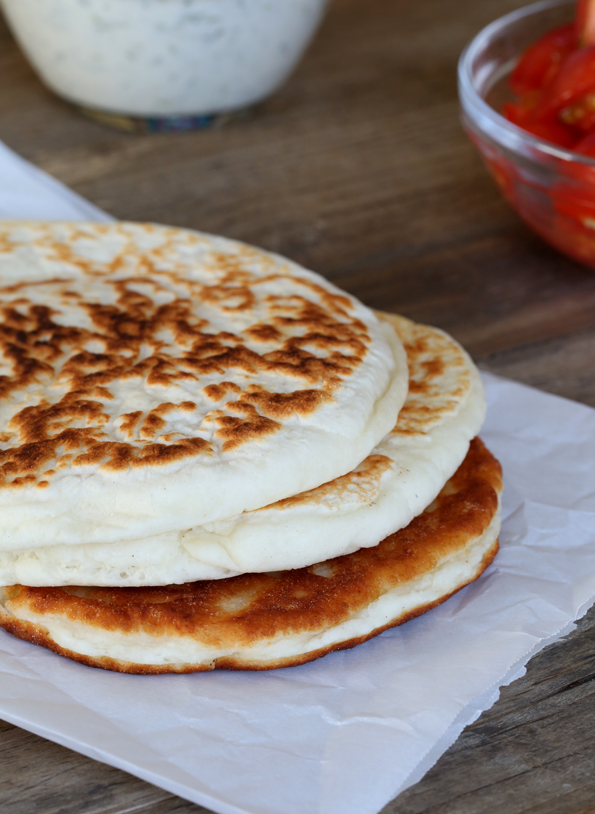 There are a few moving parts in this recipe, so it's more than just a couple steps long. But the chicken is best when it's marinated ahead of time for a day or so. Make it ahead!

I made the chicken under the broiler, which is super fast. You could also grill it. The tzatziki is also best when it is made at least a few hours ahead of time. Time saver! 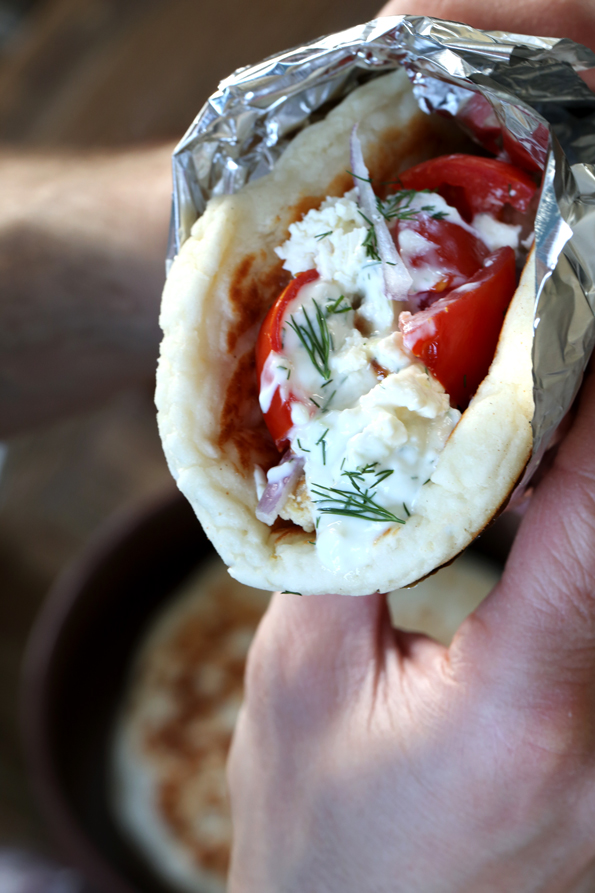 My husband is the hand model in the first and last photos here. And yes, he did get to eat that after he pretended to eat it for the camera. Oh, and in that second photo? The little hand belongs to my youngest. And she got to eat for realz after pretending to eat, too. Nice work if you can get it, right?

FOR THE CHICKEN
2 cloves garlic, peeled and minced

FOR THE TZATZIKI
1/2 cup peeled, seeded and shredded cucumber (I have used everything from kirby cucumbers to 1/2 English cucumber)