This yeast-free gluten free Irish soda bread has that crumbly, crunchy top and the tender inside, studded with soft raisins. Just sweet enough. 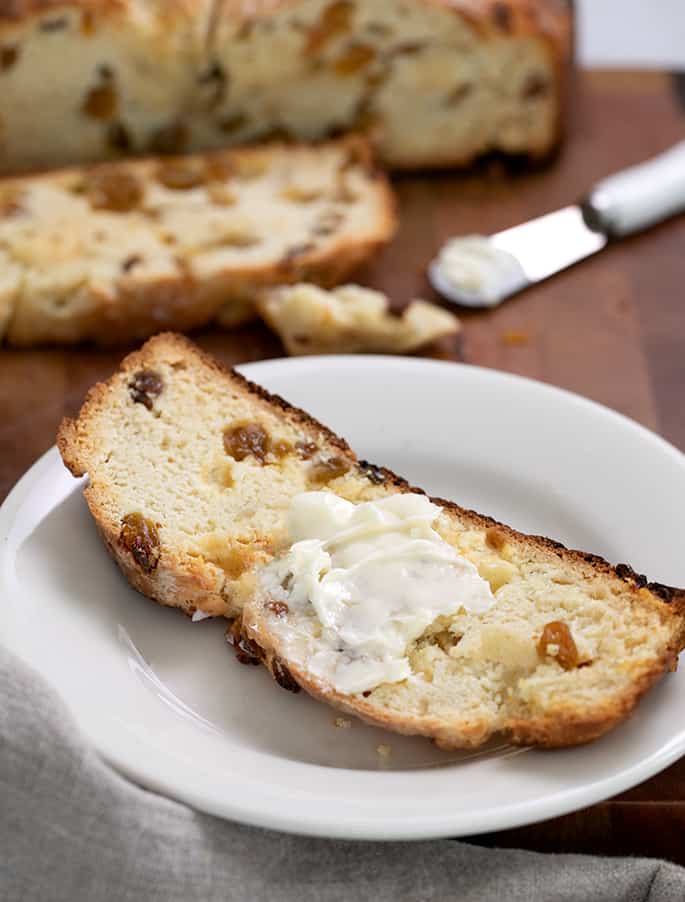 This gluten free Irish soda bread is a lightly sweet quick bread that tastes best slathered with some extra Irish butter. Celebrate St. Patrick’s Day, or any day, the way you remember.

I first developed this recipe many years ago when my gluten free son, who is now considerably taller than I am (and I’m not short) was in the early years of grammar school. They were “celebrating” St. Patrick’s Day by sharing Irish soda bread.

Since he was already gluten free, and necessity is the mother of invention, I developed this recipe. I’ve been making it ever since—and when my son is feeling generous, he will remember the grammar school times to me.

Irish Soda Bread is a quick bread, not a yeast bread (although frankly I think it would make a fabulous yeast bread). And it’s not your typical quick bread. First off, it isn’t baked in a loaf pan like most quick breads.

So there’s that. But the way I go about things, it’s also made more like a pastry. That means cold ingredients, chunks of butter, and a light touch when handling.

All that leads to a light, tender and almost flaky pastry-like bread. But it slices perfectly, either in wedges or more traditional slices.

Sometimes I make it with fewer raisins, sometimes with more. I honestly can’t decide which I like better. I do know that it’s just not the start of spring without some Irish Soda Bread. Does Irish soda bread have to have raisins?

This recipe calls for at least 1 1/2 cups (or as much as 2 cups) raisins. I like Thompson raisins, but golden raisins like you see in the photos and video here are lovely, too.

You don’t have to make Irish soda bread with raisins, but you’d need a substitute here. The recipe is developed to include a mix-in.

We also have a recipe for savory gluten free Irish soda bread, which doesn’t even have a single raisin. The savory recipe is more like traditional bread, even though it’s also leavened without yeast. Once you understand that you’re making quick bread, with cold ingredients that are handled lightly, like a pastry, you shouldn’t have too much trouble making a successful loaf. There are a few things to keep in mind, though.

This is a large loaf. The recipe calls for a full 4 cups (560 g) of all purpose gluten free flour.

The smaller the pan you bake it in, the longer you’ll need to bake it. If you bake it in a 10-inch pan or skillet, it should bake completely in 40 minutes.

If your pan or skillet is 9-inches, 45 minutes should do the trick. If you go even smaller, like an 8-inch baking pan, you’ll have to adjust the baking time and temperature.

For an 8-inch pan, bake for 30 minutes at 375°F. Reduce the oven temperature to 350°F, cover the loaf pan with foil to prevent burning, and bake for about another 30 minutes or until the top doesn’t give noticeably when you press the center.

To make a much smaller loaf, you can split every ingredient in the recipe in half. Bake in a 6-inch pan for about 30 minutes. The butter and buttermilk in this recipe are both dairy. You can try replacing the cold, chopped butter with Melt brand or Miyoko’s Kitchen brand vegan butter.

Spectrum brand non-hydrogenated vegetable shortening would probably also work. Just be careful about chilling it too much, since it becomes very hard when very cold, unlike butter.

There are two eggs in this recipe. You might be able to replace each with a “chia egg” (1 tablespoon ground white chia seeds + 1 tablespoon lukewarm water, mixed and allowed to gel).

Instead, you could try our recipe for savory gluten free Irish soda bread. That recipe doesn’t call for eggs at all.

This is a sweet Irish soda bread recipe. It has 3/4 cup granulated sugar, and is developed to use sugar.

Sugar isn’t only a sweetener. It also adds bulk and tenderizes the bread. You may be able to reduce the sugar a bit, to 1/2 cup (100 grams), but I can’t promise results.

For a savory version that only has a bit of sugar, that’s even optional, please click the link above for the savory bread. 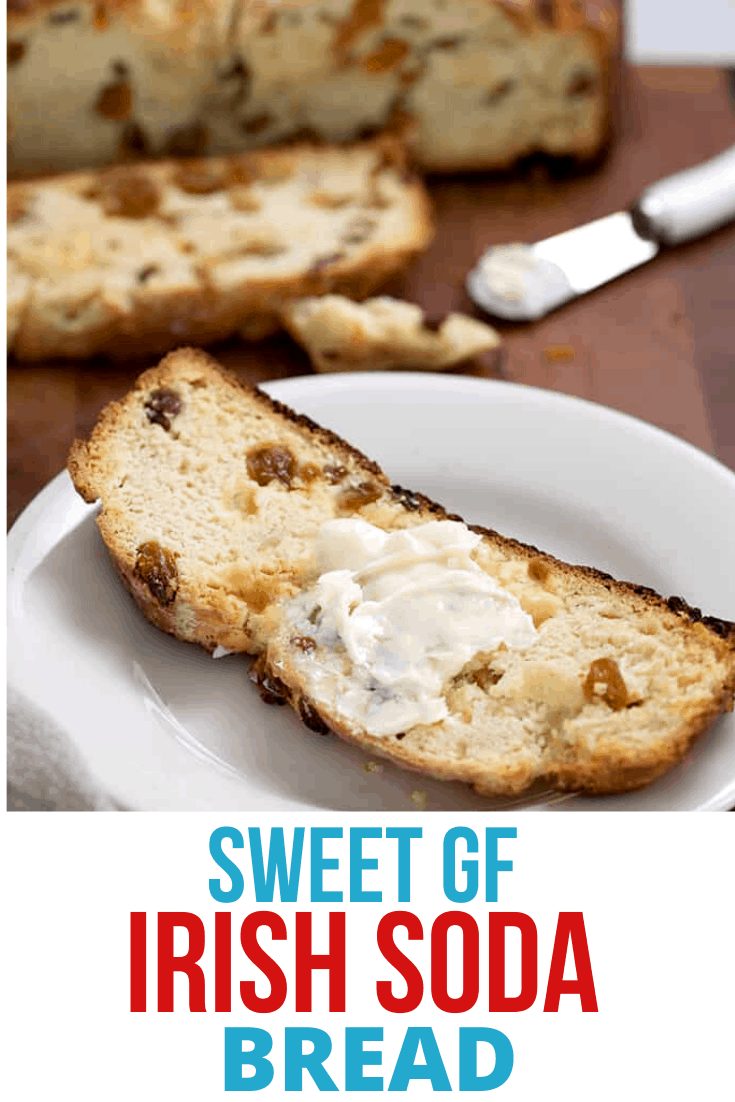 2 teaspoons xanthan gum (omit if your blend already contains it)