As I’m writing this, no one sells packaged and prepared gluten free wonton or egg roll wrappers. If they did, I’d be the first to celebrate by buying a case.

You can actually buy frozen, prepared gluten free egg rolls, and they’re not half bad. But they’re super expensive, and they don’t crunch like I wish they did.

For now, we begin with our recipe for gluten free wonton wrappers. You can double the recipe, if you like, particularly since if you’re new to the process, you may not roll the wrappers as thin as you might like, so you’ll have fewer egg rolls in the end.

You can also wrap the raw, unshaped dough tightly and refrigerate it for at least 4 days, or freeze it for longer. Just defrost at room temperature and work with the dough as fresh.

Simply divide the won ton wrapper dough into rectangles about 1/4-inch thick. Cut out 3½ to 4-inch squares, and then roll those squares into 1/8-inch, about 6-inch squares.

Rolling the dough a bit thicker, cutting shapes, and then rolling those shapes thinner is the easiest way to get the wrappers as thin as possible. It helps prevent them from tearing as you work. The thinner the wrapper, the crispier it will be after frying. How to shape the raw egg rolls

With a corner of the square facing you, place a bit of filling about an inch from that corner. The filling should be as dry as possible without sacrificing flavor.

Fold the corner over the filling, and fold one more turn. Make it tight, and press out any trapped air.

Whenever you’re planning to fry filled dough, be sure to eliminate any air as you go. Trapped air will allow oil to seep in during frying and the finished product will be greasy. 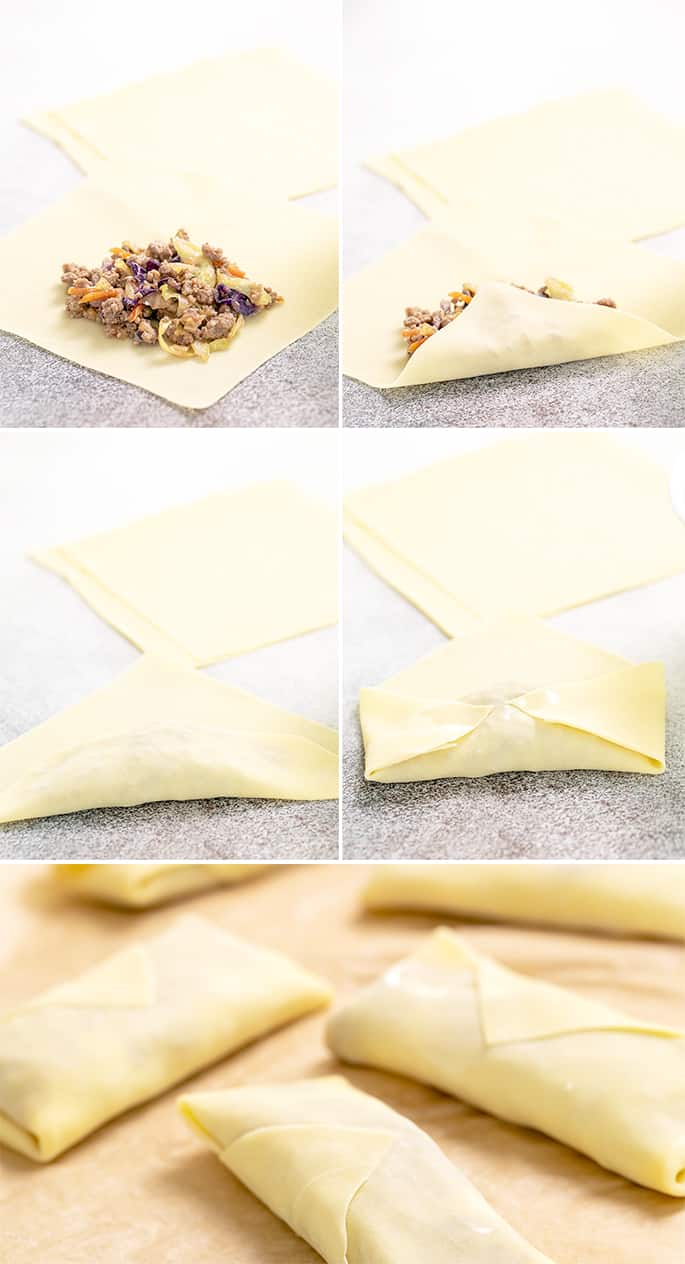 Next, fold the left and right sides, tightly, toward the center of the roll. Roll away from you once more, until the roll is sealed. Moisten your fingers as you go only as much as necessary to make the wrappers stick closed at each step.

Keep in mind that moisture makes hot oil splatter. If you allow your moistened, sealed egg rolls to sit for a moment as the oil heats to the proper frying temperature, any excess moisture should evaporate. Rice paper wrappers, used for spring rolls that only need to be moistened in warm water before using them to wrap filling, are such a delicious treat. If you’d really like to try making egg rolls but don’t have the patience to make the egg roll wrappers, you can try using spring roll wrappers instead.

Since spring roll wrappers are so thin and soft, they tend to absorb oil quickly. I’d recommend doubling them, and allowing them to dry completely after shaping before you immerse them in hot frying oil. It won’t be precisely the same, but it’s a nice place to start. There aren’t any eggs in the filling of these egg rolls, but there are 3 eggs in the wonton wrappers recipe. They provide structure for the wrappers, and I’m afraid I don’t think they can be successfully replaced.

The cornstarch in the filling recipe helps absorb some of the liquid in the filling so that nothing leaks out during frying. You can replace it with nearly any neutral starch, like potato starch or arrowroot.

If you can’t have honey or would simply like to avoid it, try using an equal amount, by weight, of brown sugar. You can even leave out the sweetener entirely, but the filling doesn’t taste particularly sweet because of it.

If you use beef that’s higher in fat than 90% lean, you’ll just need to drain as much of the rendered fat as possible when you cook it before proceeding with the recipe. I’ve also made this filling with ground chicken and ground turkey, and it’s still delicious.

If you’d like to avoid frying oil entirely, an air fryer might work (although I haven’t tried that here). Keep in mind that an air fryer is just a small, powerful convection oven, so you don’t really need a separate, dedicated air fryer. A convection oven of any kind works similarly (even if it’s a fancy toaster oven with a convection setting).

I’ve been the most successful with an air fryer, like when we made gluten free fried won tons, by spraying oil generously on both sides of the raw dough before frying. The instructions in that recipe should be helpful in air frying these gluten free egg rolls. 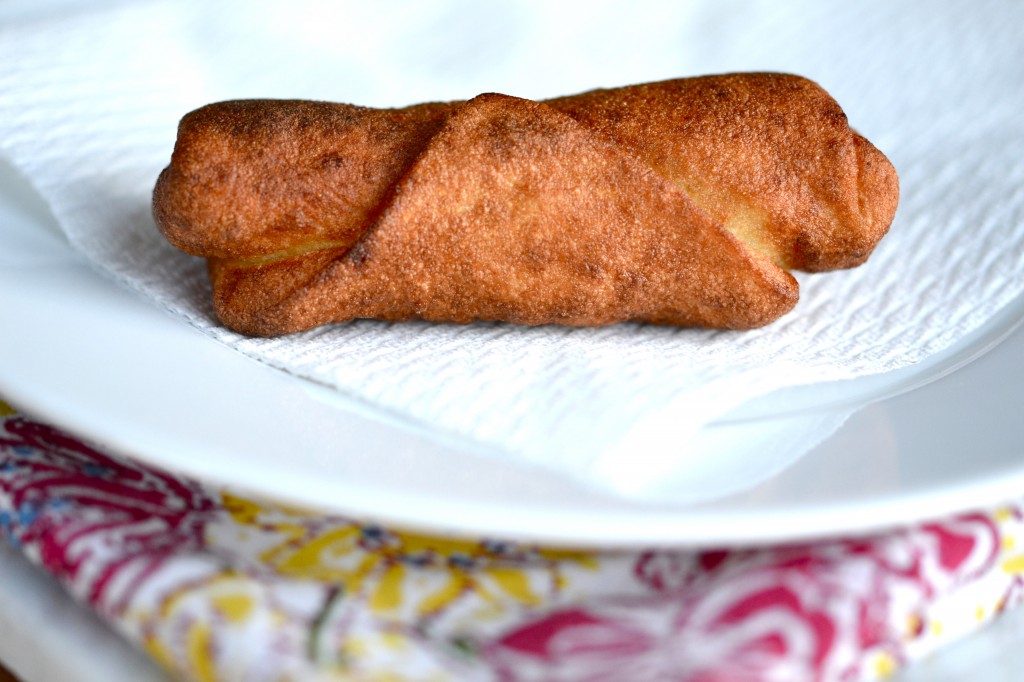 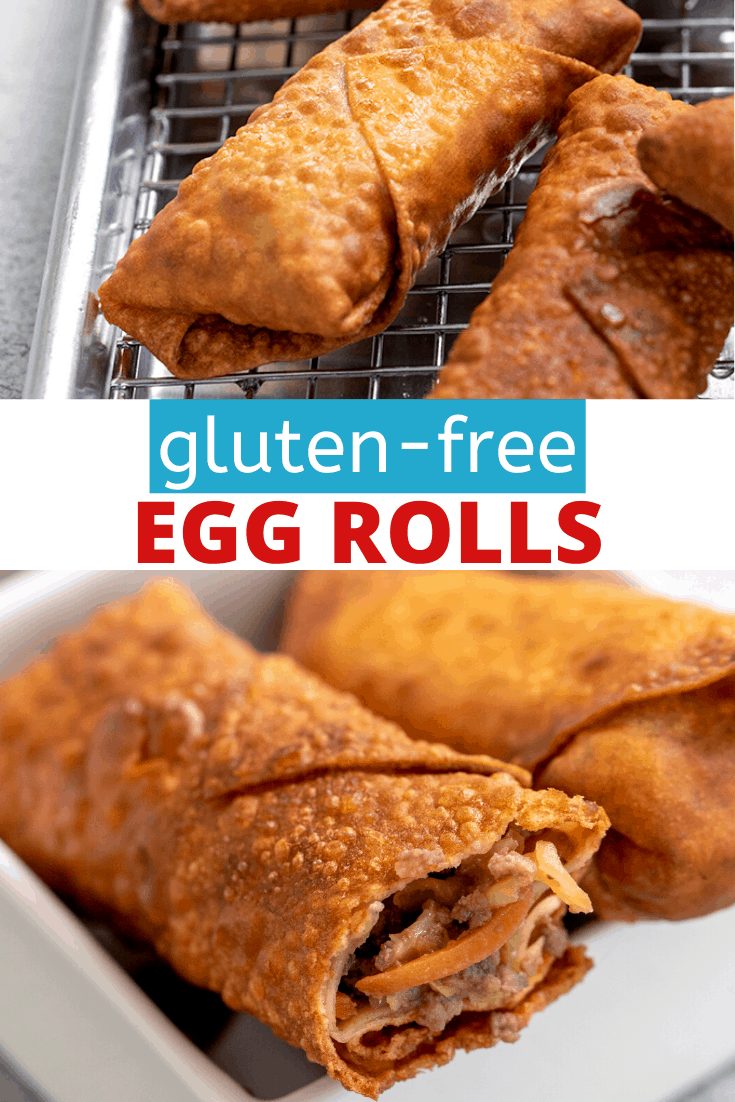 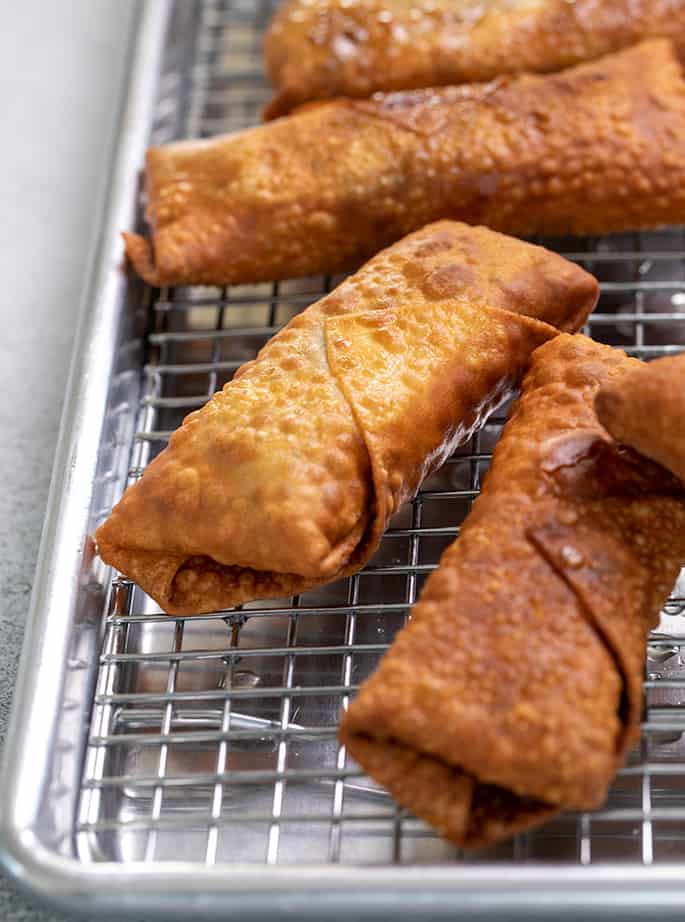