White bean blondies, like their black bean brownie cousins, taste nothing like beans but still have all that added nutrition. You will not believe the taste and texture! 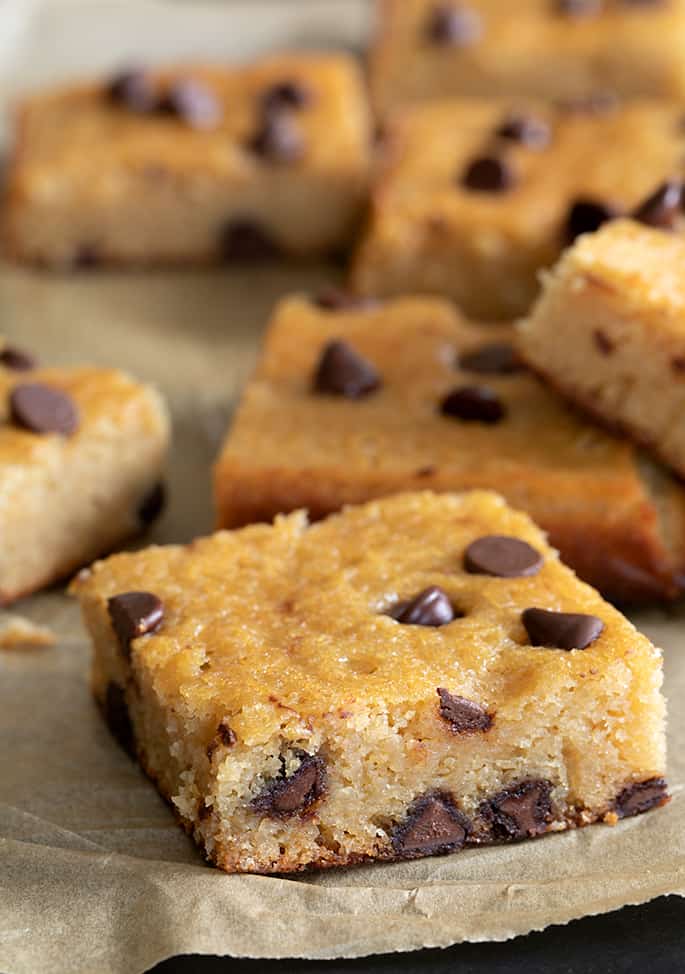 How do white bean blondies compare to black bean brownies?

This recipe is adapted from one of the most popular recipes on this blog, our black bean brownies. Even though I'm not active on Instagram, I always check to see if anyone has tagged me in their posts—and so many of you have shouted your love for that recipe in particular. They always turn out, and taste so, so good.

When you're baking a dessert with beans, you do not want the baked goods to taste anything like beans. Since I've been baking gluten free since 2004, when a garbanzo bean-based gluten free flour blend was everywhere (including in my kitchen), I am super sensitive to anything that tastes like beans. Or even smells like beans when it's raw.

I can promise you that, like our black bean brownies, these blondies taste nothing like beans. It's harder to mask the taste and smell of beans, though, in a blondie since you don't have cocoa powder or brewed coffee in the recipe.

The brownie batter in the black bean brownies is much thicker than the batter in this recipe, though. But the blondies are even more stable after they're baked than the brownies, which can be a little extra tender. 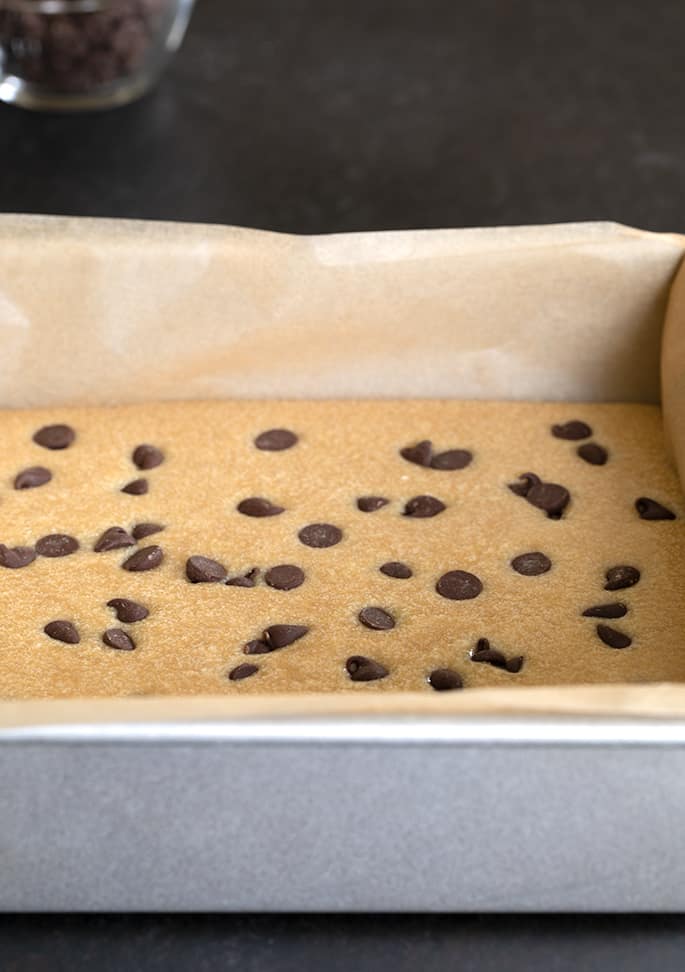 How these blondies get their taste and texture

You still want that slightly chewy brownie texture and that rich taste that isn't just sweet. Here, we owe the texture of these blondies to a combination of the right beans (I find that Great Northern beans work best), eggs, nonfat dry milk, and cornstarch, in all the right amounts.

When I first made the recipe, I used all cornstarch without any milk powder, and I found that both the texture and the taste weren't quite right. The blondies were a bit tangy (too much cornstarch can do that) and were too spongy.

We owe the taste of these blondies to a combination of brown sugar and plenty of vanilla extract. Plus, Great Northern beans, unlike garbanzo beans, don't have much flavor or aroma to cover. 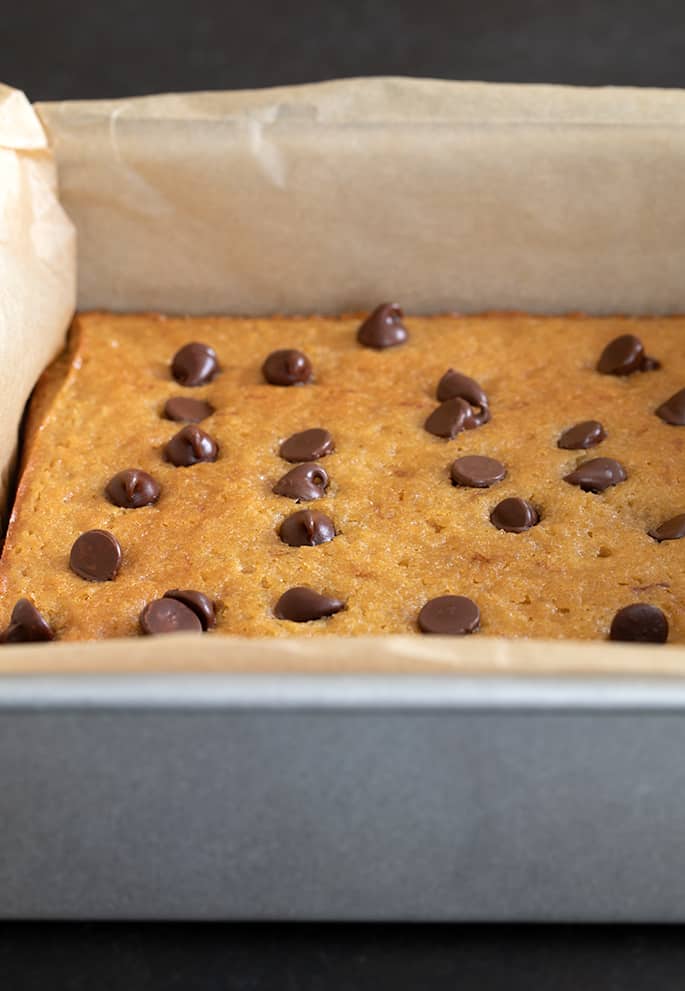 How to make white bean blondies

Whenever I make a recipe with cocoa powder, I'm often asked if that ingredient can just be left out or replaced with a “vanilla alternative.” Sadly, there isn't any appropriate substitute for cocoa powder on a one for one basis. But a combination of milk powder, cornstarch, and butter instead of oil helps make this recipe a success.

In this recipe, first, blend drained and rinsed Great Northern beans and eggs until they're very smooth. A blender is preferable, but if you let a food processor work for a while, the beans will smooth out. Instead of oil, we're using butter because it makes for a more flavorful blondie. But since we don't want the butter to be liquid, we aren't blending it with the eggs and beans.

Then, the brown sugar, milk powder, cornstarch, baking powder, and salt are whisked and mixed until well-combined and any lumps of brown sugar are removed. Then, the bean mixture is added, along with room temperature butter and vanilla, and mixed or whisked until very smooth. It will be thin, about the consistency of heavy cream.

About half of the chocolate chips are added carefully on top of the mixture after it's been transferred to the prepared baking pan. If you add them before, they'll all sink to the bottom since the mixture is too thin for them to be suspended completely until the blondies have begun baking.

After the blondies are baked about halfway, add the remaining chocolate chips and allow the blondies to finish baking. They rise to the perfect chewy and tender texture, with no trace of the white beans that form their base. 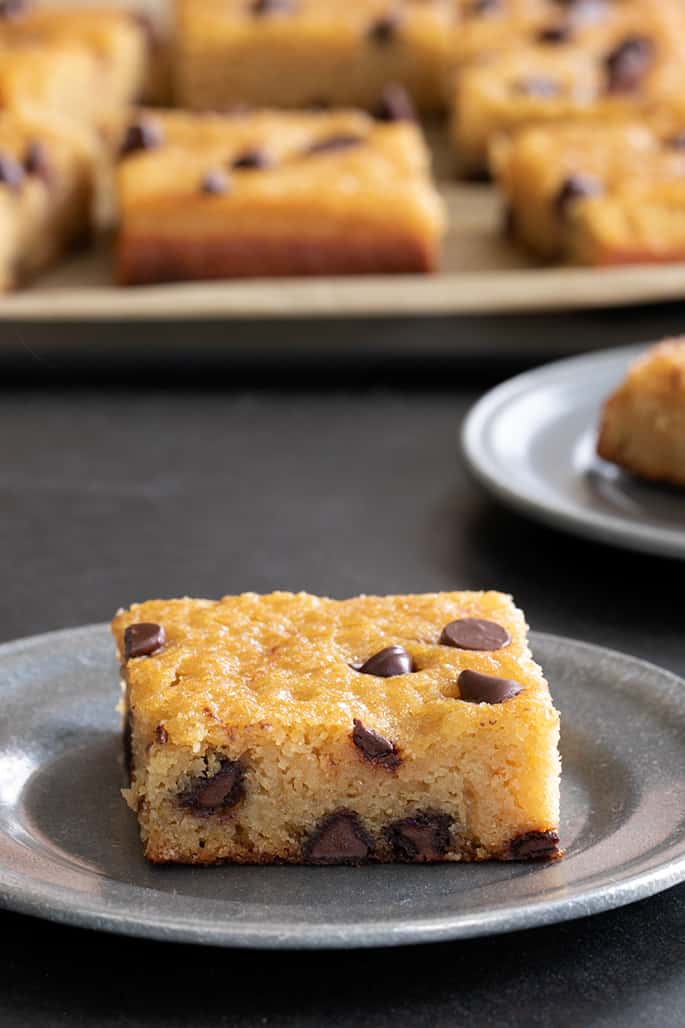 Dairy-free: Unlike their black bean brownie cousins, these blondies are not naturally dairy-free. They have dairy in the forms of both butter and nonfat dry milk.

I haven't tried this particular recipe with that substitution, but in the past, I've had success with Native Forest brand coconut milk powder. And I've even started seeing the product in my local grocery store, which is great.

Egg-free: Since there are only two eggs, you might have success replacing them with 2 “chia eggs” (1 chia egg is 1 tablespoon ground chia seeds + 1 tablespoon lukewarm water, mixed and allowed to gel). But this recipe is so mysterious, and the batter is so thin, that I'm concerned it won't work. If you give it a try, please report back and let us know how it went!

Corn-free: The cornstarch in this recipe can easily be replaced with potato starch or arrowroot, by weight. The cornstarch helps provide a bit of structure, and helps the batter hold onto the chocolate chips, so it can't just be eliminated without a replacement.

Beans: I have only tested this recipe with Great Northern beans, which are a really mild-tasting but relatively firm white bean. They're perfect for baking.

If you can't find Great Northern beans, you can try making this recipe with white beans, but you may taste the beans in the final blondie (or you might not! I honestly don't know). Just don't try garbanzo beans, because you will smell and taste them! 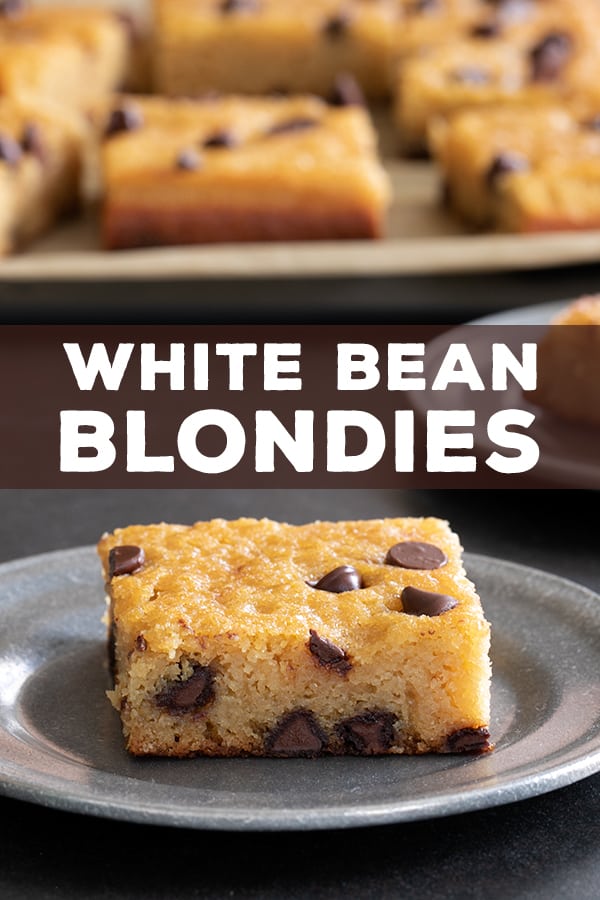 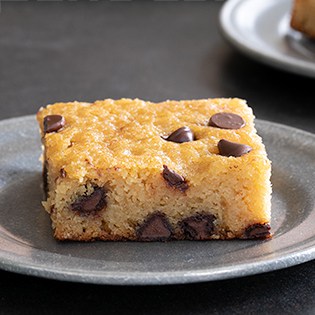