Ten gluten free donuts for every taste and appetite. From baked to fried, cake to yeasted, chocolate to vanilla and cinnamon. It’s all here. Because when you need a donut, you need a donut! 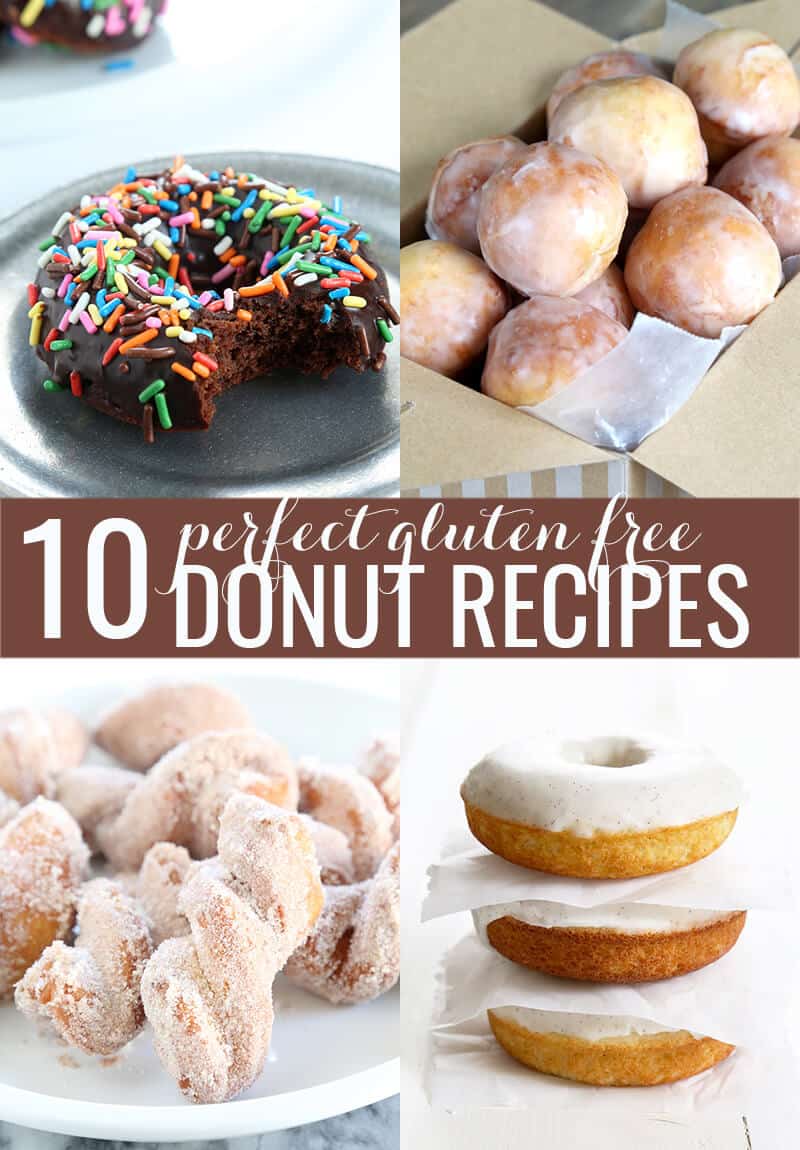 When you scroll through these ten recipes for gluten free donuts, imagine them in a glass case with a hammer alongside. On the outside of the glass, in large letters, it says “In case of emergency, break glass.”

Because if you’re new to eating gluten free, you may not have experienced this just yet, but you will. And it will feel like an emergency!

You may not have eaten many donuts, or even thought you cared for them much, before you went gluten free (or before your beloved child, spouse or friend went gluten free). But at some point, it happens to the best of us: you gotta have a donut.

It’s just the way it is. Maybe it’s because you no longer can just wander into Krispy Kreme, Dunkin Donuts or Tim Hortons  and order your favorite nice chocolate glazed. Who knows.

It just happens. And I have the reader emails (and the personal experience) to prove it. So make yourself a big, hot cup of coffee, and pull up a stool. It’s time to get down to brass tacks. 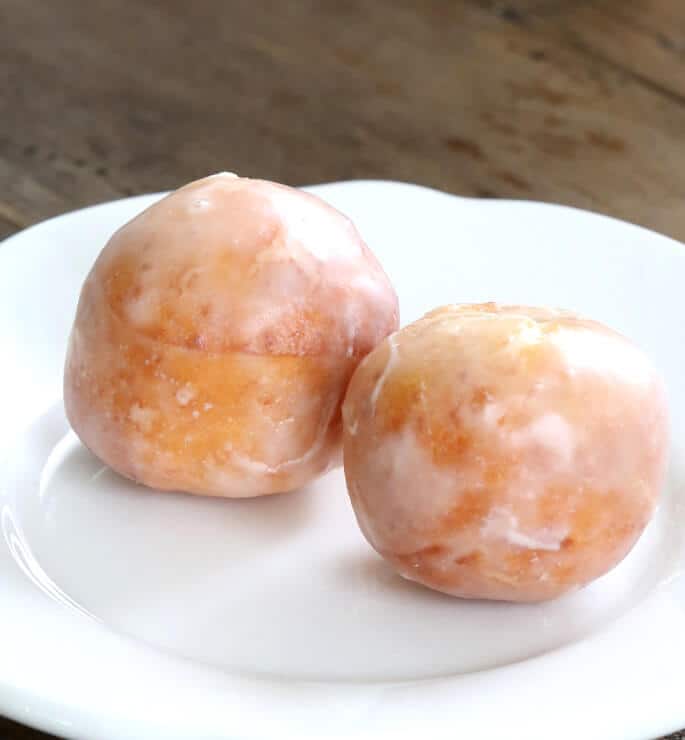 Put Dunkin Donuts to shame. Make the dough ahead of time, but set a bit of time aside on a weekend when you’re ready to fry the donuts. You’re going to want to eat them fresh.

You might even consider a neon sign to light up when they’re ready, a la Krispy Kreme. They’ll come running. 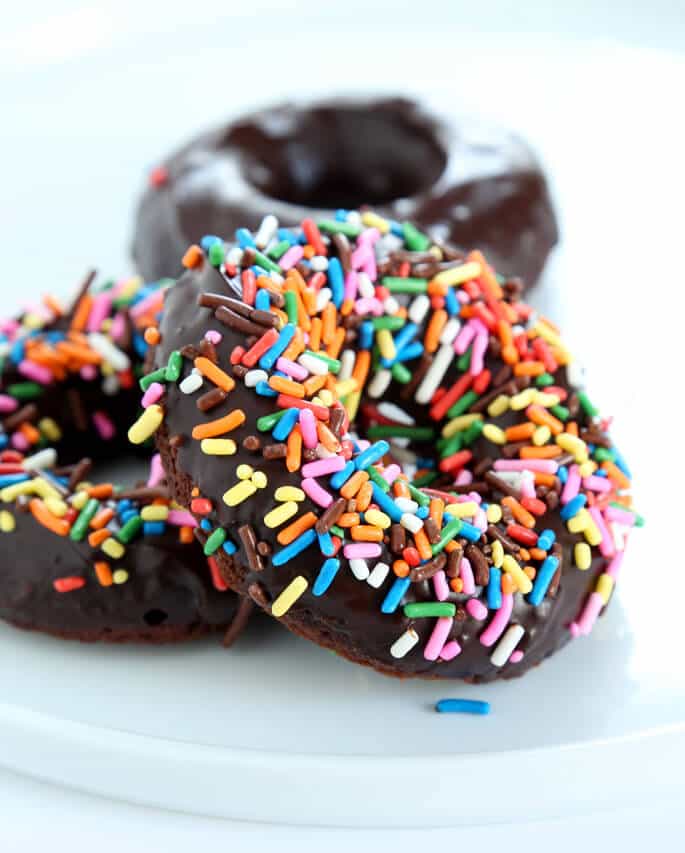 Gluten Free Chocolate-Glazed Donuts from Gluten Free on a Shoesting Quick & Easy: This donut recipe took forEVER to get right, and then it was so right it made it to the cover of the cookbook.

Rich and chocolatey, but still so quick and easy to throw together. Especially when you have a little mini donut machine, but they’re perfect for a donut pan in the oven, too.

Don’t have a donut pan (yet)? No worries. I’ve included instructions for how to make them muffin-shaped. Just close your eyes when you eat them and we’re alllll good. 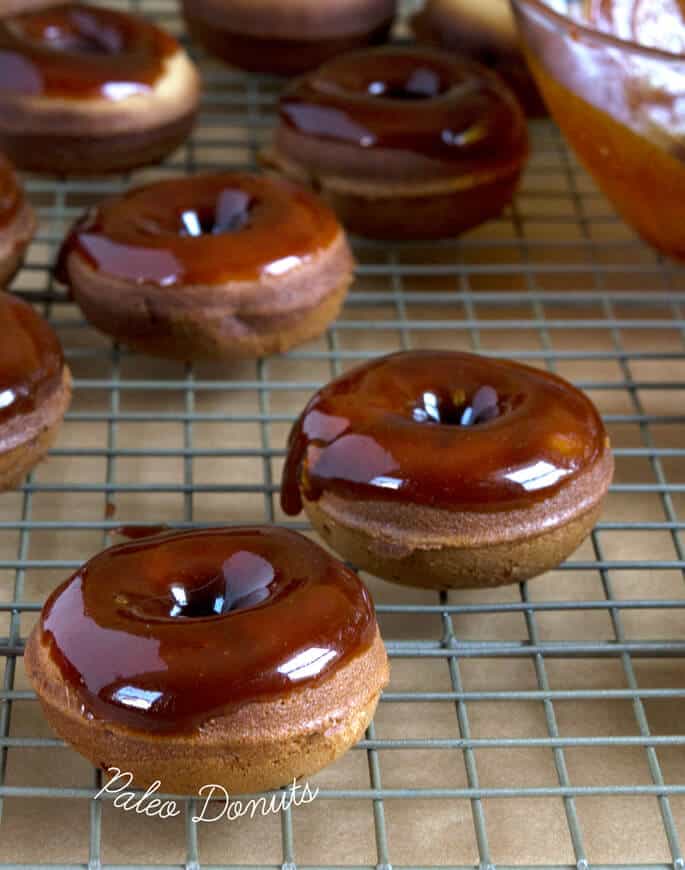 Paleo Donuts: Made with heart-healthy almond flour and absolutely no starches or other fillers, these are for my Paleo and Paleo-curious friends (count me among the latter category). They actually freeze super well.

Since they really are quite virtuous, it’s worth making a double batch and stocking the freezer with Paleo donuts for busy weekday mornings. 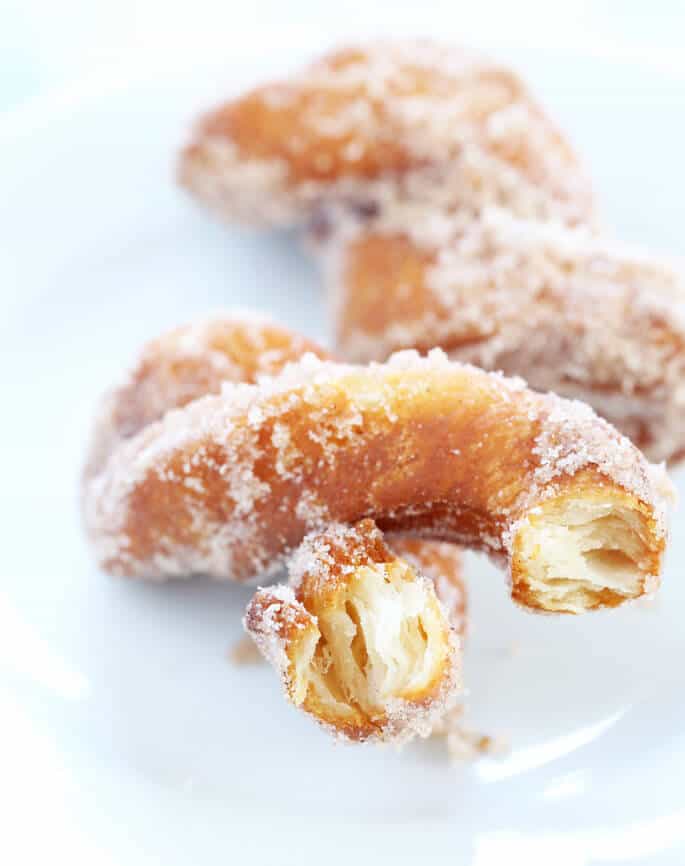 A simple batch of gluten free biscuits is quickly cut into rounds, twisted and fried into the flakiest gluten free biscuit donut twists you’ve ever seen. Like the glazed donut holes above, make the dough ahead of time and freeze or refrigerate it. 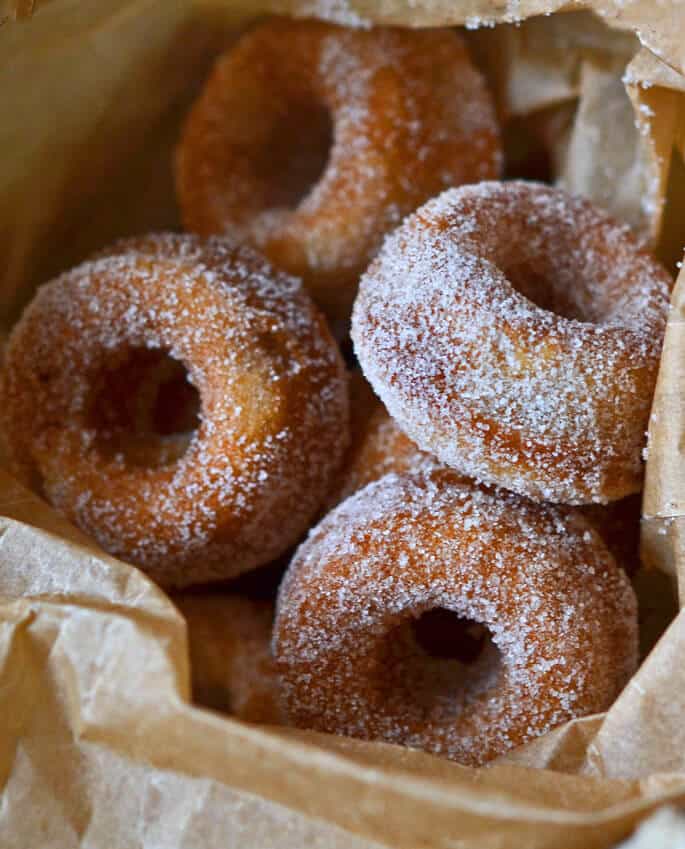 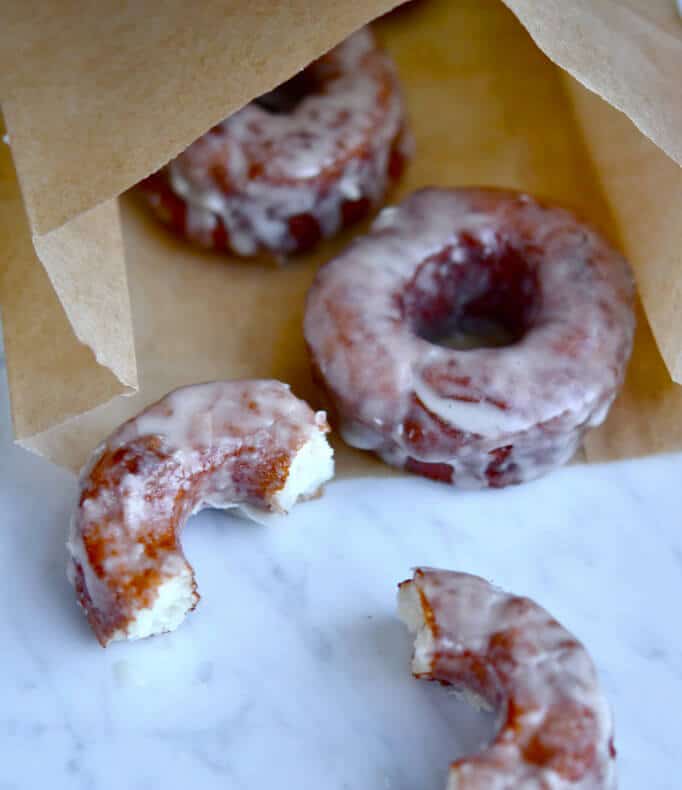 Gluten Free Yeast-Raised Glazed Donuts: Old-fashioned donuts like these gluten free yeast-raised babies are meant to be fried, not baked. They’re a shadow of their best selves when baked. Just be sure your oil is hot enough, and the dough won’t absorb much oil at all.

This recipe is one that you can use to make the glazed donut holes above, or you can use the recipe from GFOAS Bakes Bread. This old-school recipe calls simply for an all purpose gluten free flour blend, and not for my gluten free bread flour.

This dough is more difficult to handle, and has only one rise so much less yeast flavor development. But the recipe still works like a charm, and they’re still yeast-raised donuts.

The how to video playing on this page is for these yeast-raised gluten free donuts, made in an air fryer. Amazing! 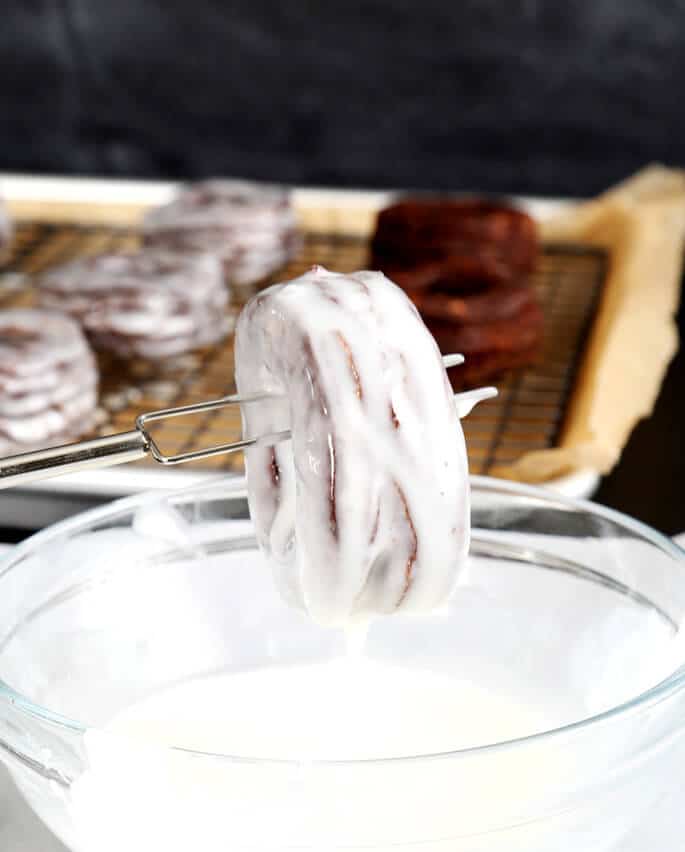 The lightest, flakiest gluten free chocolate biscuit donuts are ready in a snap when you start with a simple gluten free biscuit dough. Make the dough far ahead of time, like the cinnamon donut twists. 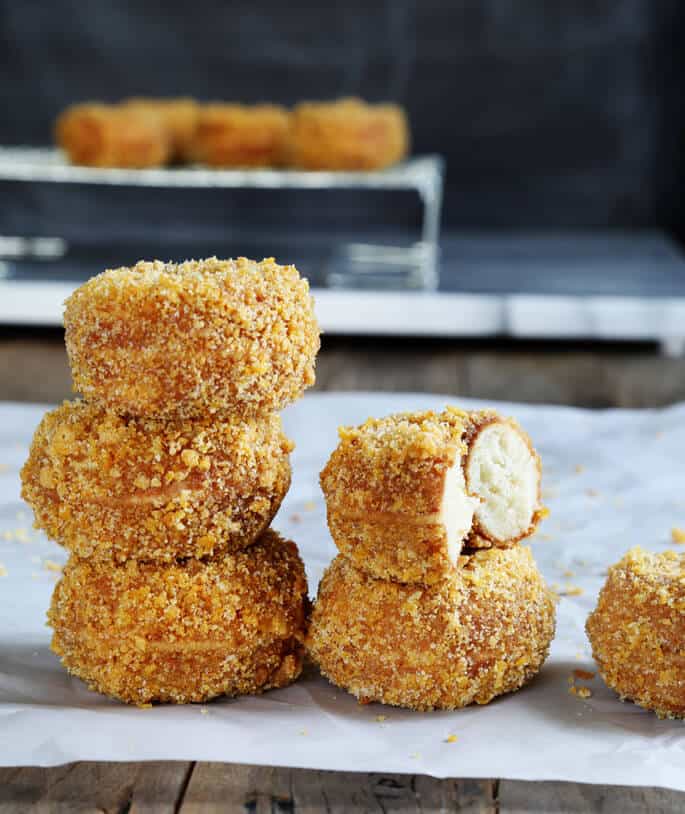 Homemade gluten free mini Hostess crunch donuts. These are a homemade version of the yellow cake mini donuts from Hostess that are topped with that crunchy-sweet crumb that tastes of honey and faintly of coconut. Who can resist? 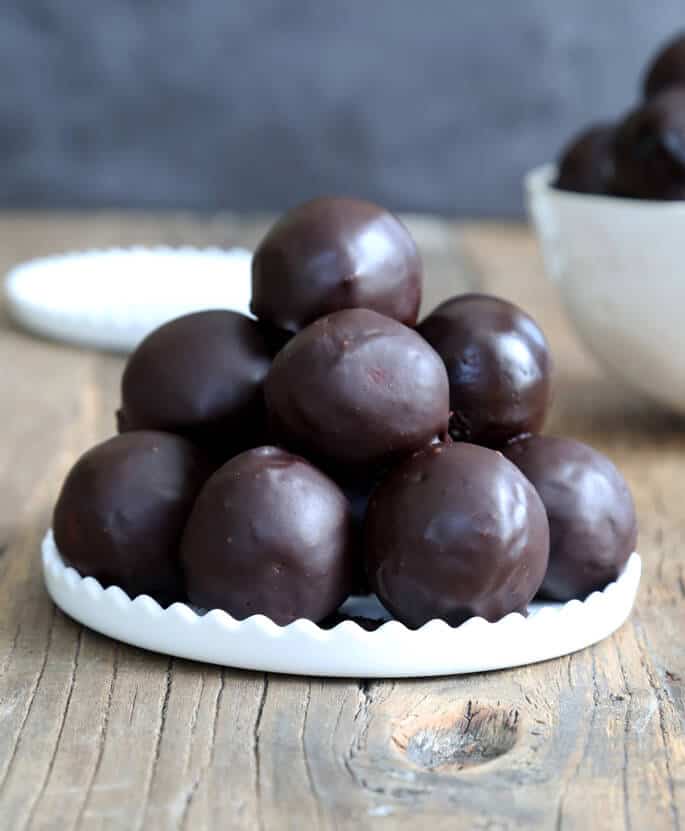 These chocolate donut holes are just like chocolate munchkins, except they’re better for two reasons: they’re gluten free so they’re safe for us to eat, and they’ve got a chocolate glaze. Finally, these gluten free glazed vanilla bean donuts are soft, moist and tender, and bake up in minutes. They’re basically the perfect vanilla donut. Make them with or without the seeds of a real vanilla bean.

I buy vanilla beans in bulk online (affiliate link), and then store them in a glass bottle filled with rum in a dark corner of my pantry. In about a month, you can use the rum as vanilla extract.

But I usually just use it as a preservative for the vanilla beans so I’m not tempted to buy a small jar of 2 whole vanilla beans at the grocery store for $9 or something. 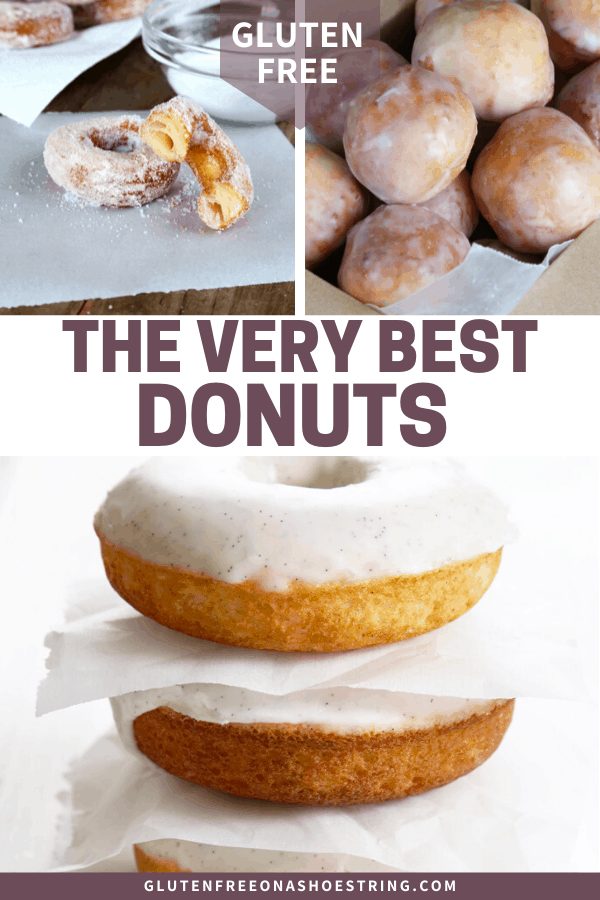 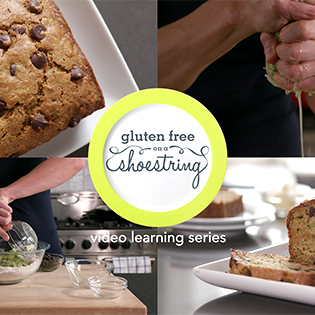 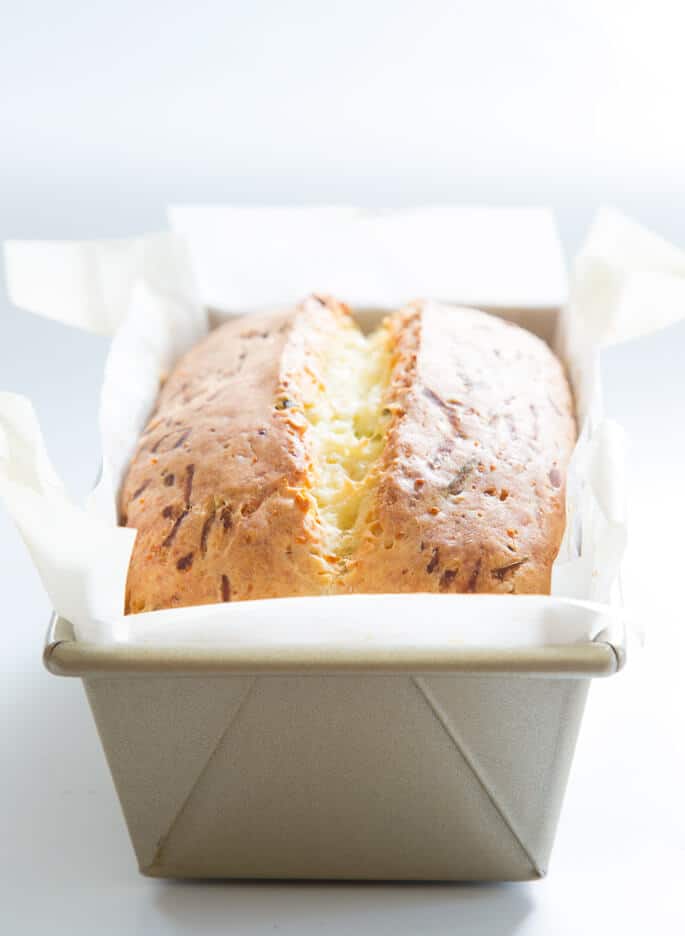