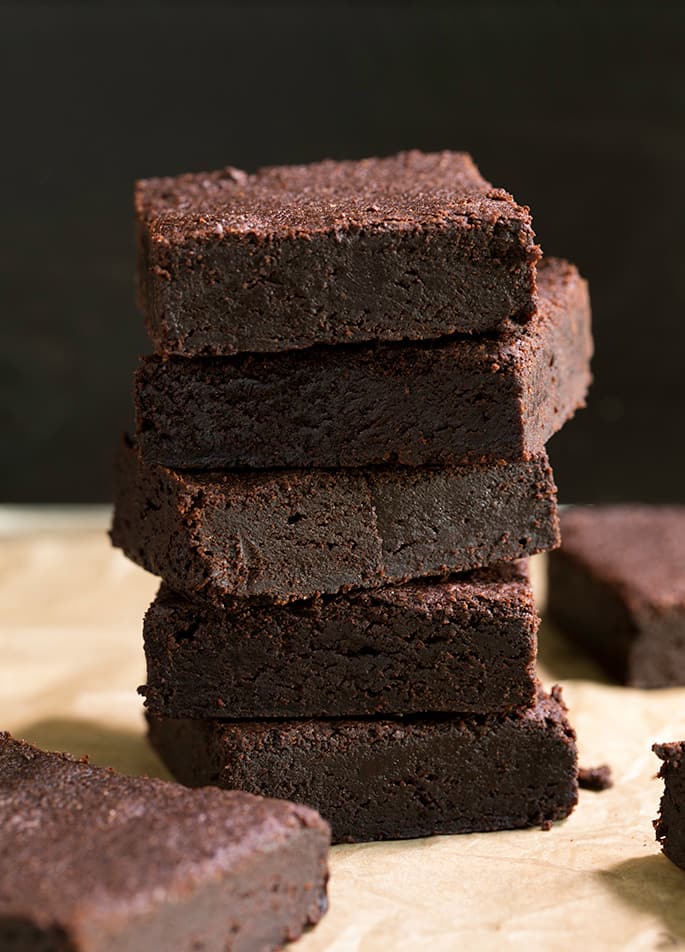 These are seriously fudgy gluten free brownies. They're not cakey at all, and they're so packed with chocolate taste and smell that there's no way you could keep them a secret.

Let's put it this way—I had them under a dome on a cake plate, each individually wrapped, and you could smell them in the next room when I lifted the dome. Now that's chocolatey.

At its most basic level, sweet homemade baked goods for home cooks fall into just a few categories: cookies (mostly chocolate chip cookies), cake (vanilla cake, chocolate cake), and brownies. These are the brownies I recommend if you're looking for that one solid recipe. It's the kind that you'll bring to every holiday, every potluck, and basically every other Sunday. 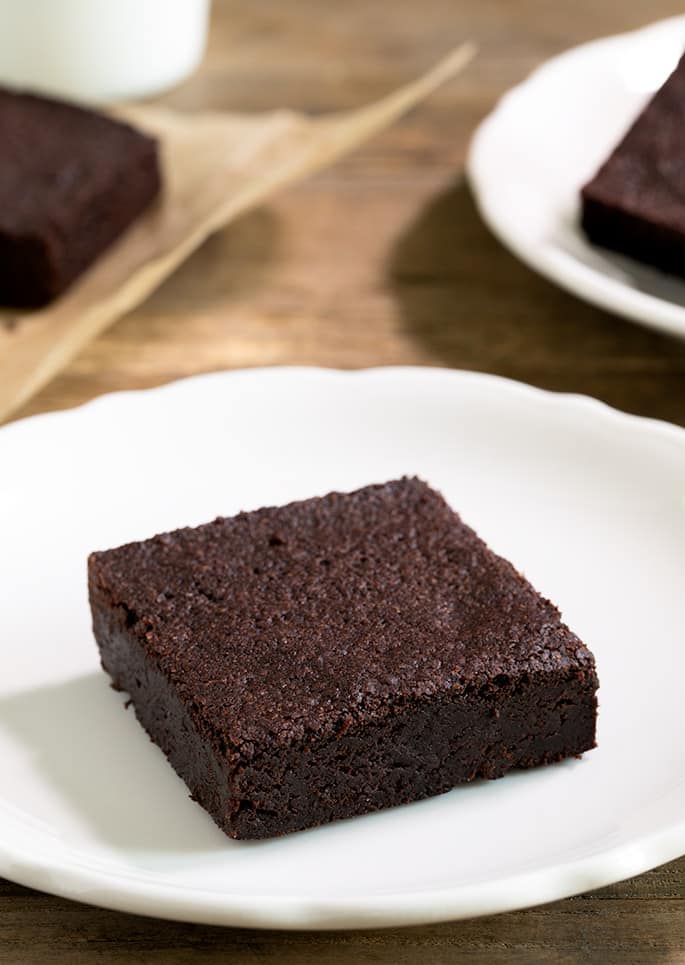 When I think of brownies in general, I think of these—the slab-type brownies that have some weight to them. They're heavy on chocolate, and they're perfect for chopping up into squares and sneaking into a lunchbox. Or sprinkling on top of your favorite vanilla ice cream.

You bite into these brownies and your teeth leave tracks. They're not actually fudge, though. Just as fudgy as a brownie can get, and still be a brownie. 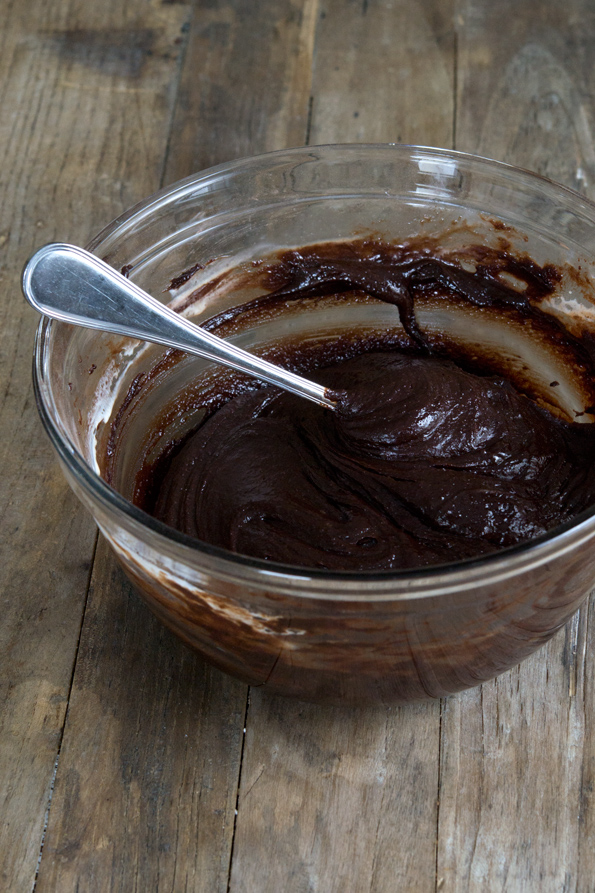 The batter is thick, and the brownies aren't the kind to rise a whole bunch and then sink. They rise slowly and evenly, and they stay that way. Be sure not to overbake them, or the bottom may burn and the top of the brownies may begin to pull away from the center.

Let's face it, though. As long as you don't burn them to a crisp, they'll still taste pretty darn good! And if you're looking for tons more gluten free brownies recipes, I've got you covered from every angle. 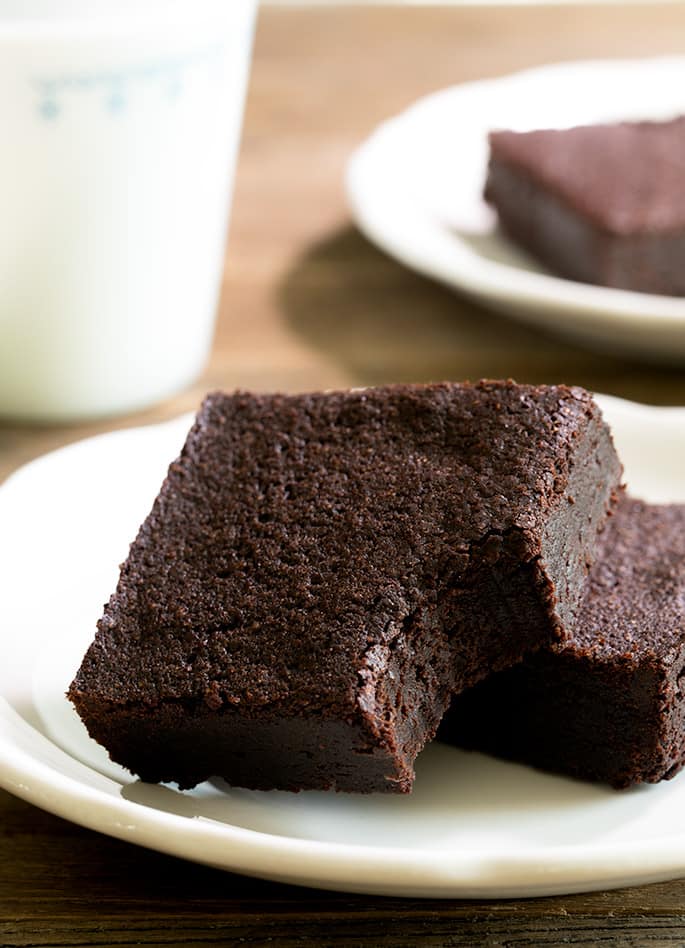 Luckily, these are quite easy to make dairy free. And I've even tried it! Replace the butter with an equal amount by weight of Earth Balance Buttery Sticks, the cream with nondairy milk (not non-fat!), and just be sure that the chocolate you use is dairy free. Eliminate the salt, too, since Earth Balance is pretty salty already.

Eggs are always a tricky spot. You can try using two “chia eggs,” but you'll have to experiment as I haven't tried that in this recipe. A chia egg is 1 tablespoon ground chia seeds mixed with 1 tablespoon lukewarm water and allowed to gel.

You might be able to replace the sugars with coconut palm sugar, but I honestly don't know. I'd probably grind it up a bit, since it is quite coarsely ground and it doesn't seem to melt in the oven as readily as refined sugar.

If you don't have Dutch-processed cocoa powder, you can use natural unsweetened cocoa powder, but add 1/8 teaspoon baking soda to neutralize the acid in the natural kind. The brownies won't be quite as rich.

This recipe calls for 3/4 cup of my basic gum-free gluten free flour blend, which is a simple mixture of superfine white rice flour, potato starch and tapioca starch/flour. Using a blend that contains xanthan or guar gum, like our mock Better Batter, makes for much tougher, less tender, brownies.

You can use another gum-free blend if you like, but if your rice flour is gritty, your brownies will be gritty. That's just the way it goes! (You could always make your own superfine white rice flour.) 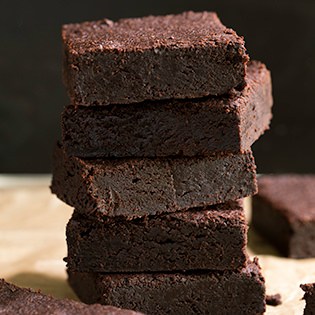