This almond flour cake, made with finely ground almond flour and with no refined sugar, has all the light and tender texture of a sponge cake—but healthier! 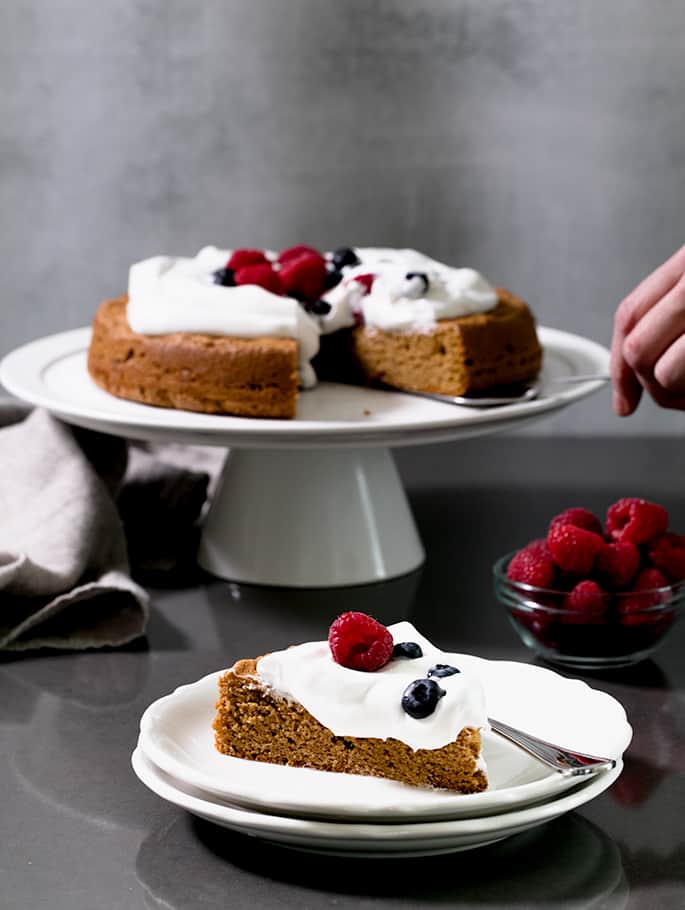 This sponge cake is made with almond flour in place of a standard gluten free rice flour blend, but it's still light and tender and just rich enough. Top it with some coconut whipped cream and a few berries, and you've got the perfect springtime dessert for your holiday table.

Although I absolutely love a one-bowl recipe, this Paleo almond flour cake just isn't one of them. If the switching of bowls is upsetting as you read through the recipe, I really recommend you scroll down and watch the 70-second video first.

When I find myself afraid to tackle a task, it's often because I don't have a vision of it. I need to see it in my mind's eye. Sometimes, a video is exactly what I need, which is why I try to provide a video for each of my recipes. Other times, a few words about the overall concept even before I hear about the exact ingredients is what it takes. 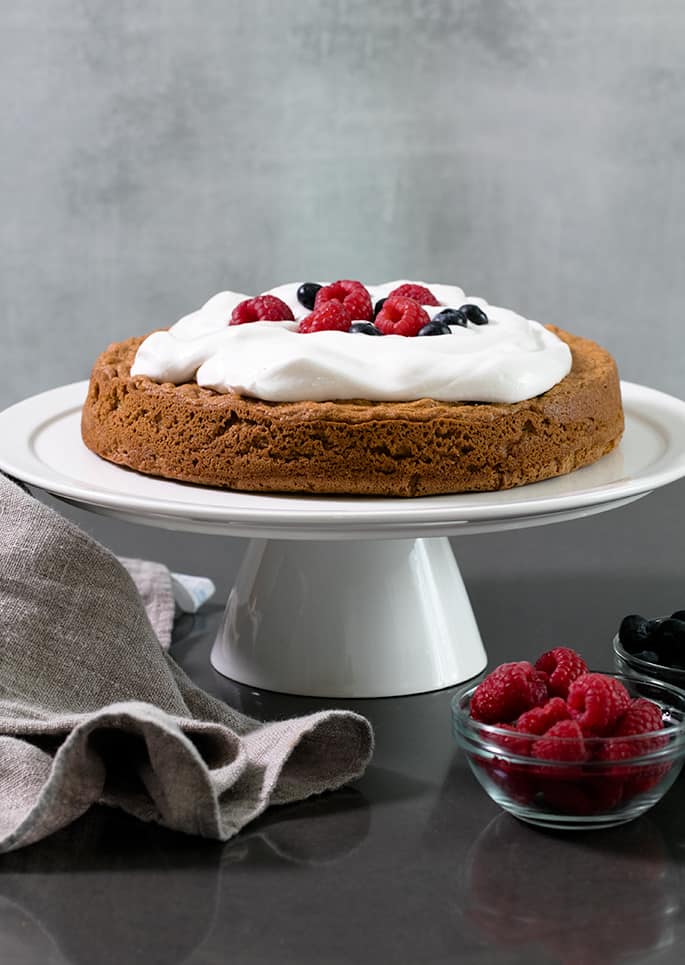 How to make a sponge cake

Since this recipe is essentially a Paleo sponge cake, it has some baking soda but most of the rise is provided by eggs. A sponge cake is similar to an angel food cake, which is made entirely with whipped egg whites folded gently into flour, confectioners' sugar, and salt, but no fat at all.

Sponge cake is essentially the same, but it's a richer cake since you use the whole egg—but separated. Egg yolks (with one whole egg, to make the original batter a bit looser and easier to beat) are beaten with vanilla, then combined with a mixture of almond flour, sugar, salt and baking soda.

That mixture will be thick and rather stiff. Since granulated coconut palm sugar is generally quite coarsely ground and doesn't melt into a batter as well as refined sugar, we grind it finely with some tapioca starch.

Whipped egg whites are then folded into the thick egg yolk and almond flour batter in two parts. The first half of the egg whites will deflate at least by half when you add them to the batter, as you'll have to have a heavier touch to combine everything. The egg yolk batter is just that thick. The second half of the whites can be folded in much more gently.

You must keep the egg whites separate from all of the other ingredients, especially the egg yolks, before they're whipped or they simply won't whip. But once you've whipped them, you can transfer them to a separate bowl and use the original bowl to beat the remaining ingredients together. 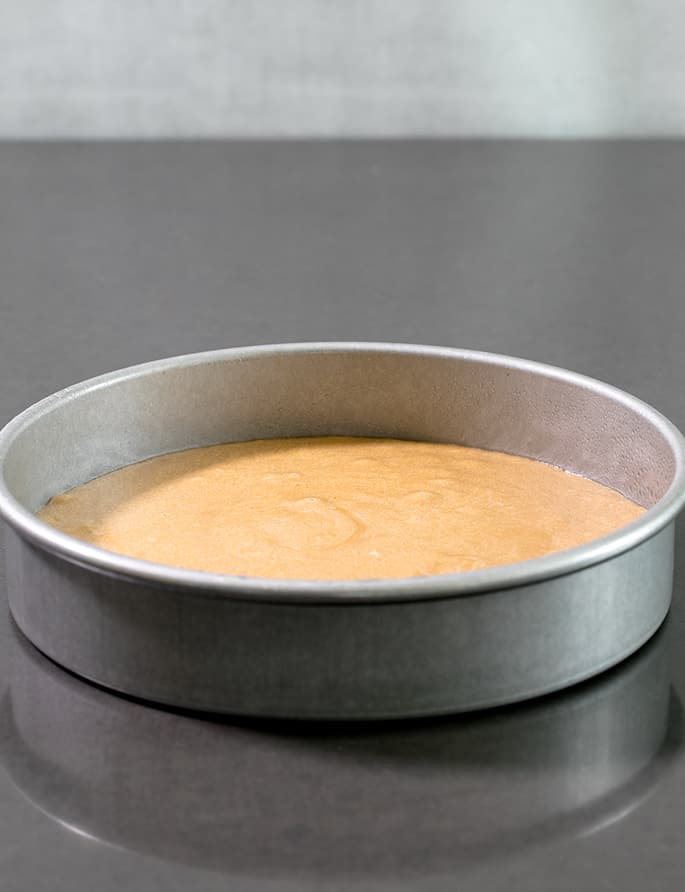 The easiest way to separate egg whites from yolks is to do it when the egg is cold, right from the refrigerator. The membrane around the yolk is much more likely to remain intact when it's cold.

Egg whites whip best, though, when they're at room temperature. The cream of tartar that's added to the egg whites after they've been beaten to a froth helps to keep the egg whites stable as you beat them.

If you don't mind a bit of lemon flavor in your almond flour cake, you can use a teaspoonful of freshly squeezed lemon juice in place of the cream of tartar.

Just like with whipping cream to stiff peaks, egg whites that are beaten more slowly are more stable. Since we're folding these egg whites into a stiff egg yolk batter, we want them to be as stable as possible. 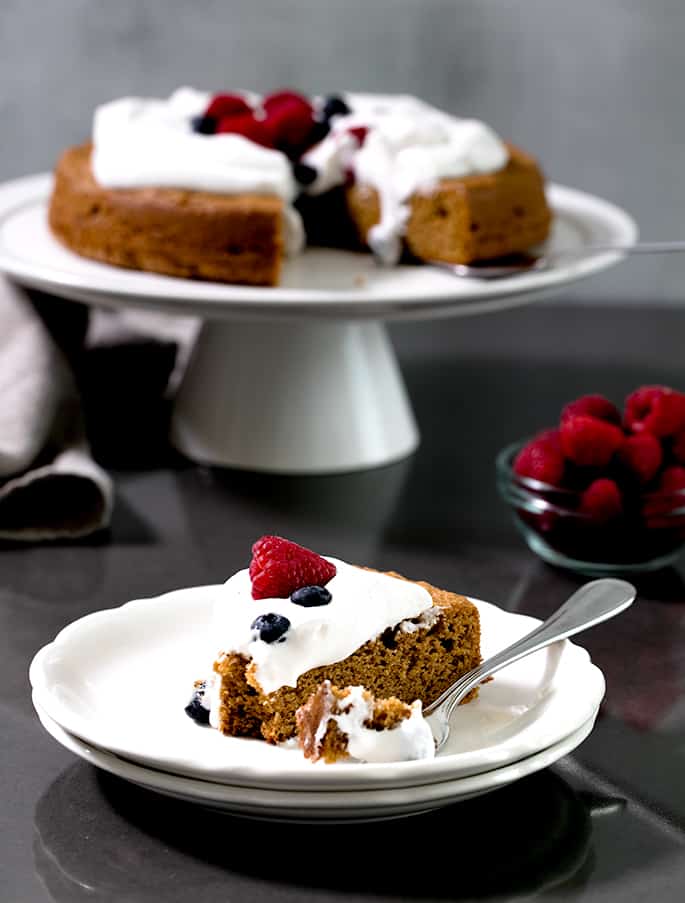 Since this recipe is Paleo, it's already gluten free, grain free, dairy free and refined sugar free. I haven't tried it with any other substitutions, but here are my best guesses:

Egg-free: There are four eggs total in this recipe, which is double what I'd ever recommend using an egg replacer to replace. If you can't have eggs, I think this recipe just isn't for you.

But if you're feeling really dedicated and adventuresome, you can try replacing the egg whites with aquafaba and try following the recommendations for replacing egg yolks on this site.

Almond flour: You should be able to successfully replace the finely ground blanched almond flour in this recipe with cashew flour. If you need the recipe to be nut-free, you can try using sunflower seed flour, but the chlorophyll in the sunflower seeds reacts with baking soda to create a greenish tint. You can try adding a teaspoonful of an acid like apple cider vinegar to help offset the reaction.

Since the recipe as written doesn't contain any particular liquid, try adding some smooth unsweetened applesauce. This is really going out on a limb, though, so it will take some real experimentation and I make no promises at all!

Tapioca starch: The tapioca starch can easily be replaced with arrowroot or even cornstarch if you don't need the recipe to be entirely Paleo-legal.

Click play ▶ below to watch me make this almond flour cake. Then make it yourself! 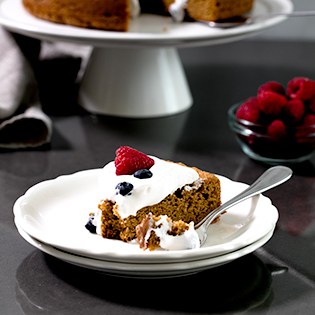