This heavenly pineapple gluten free angel food cake is made from scratch, but it's still so easy. And it only has 4 Weight Watchers SmartPoints per generous slice! 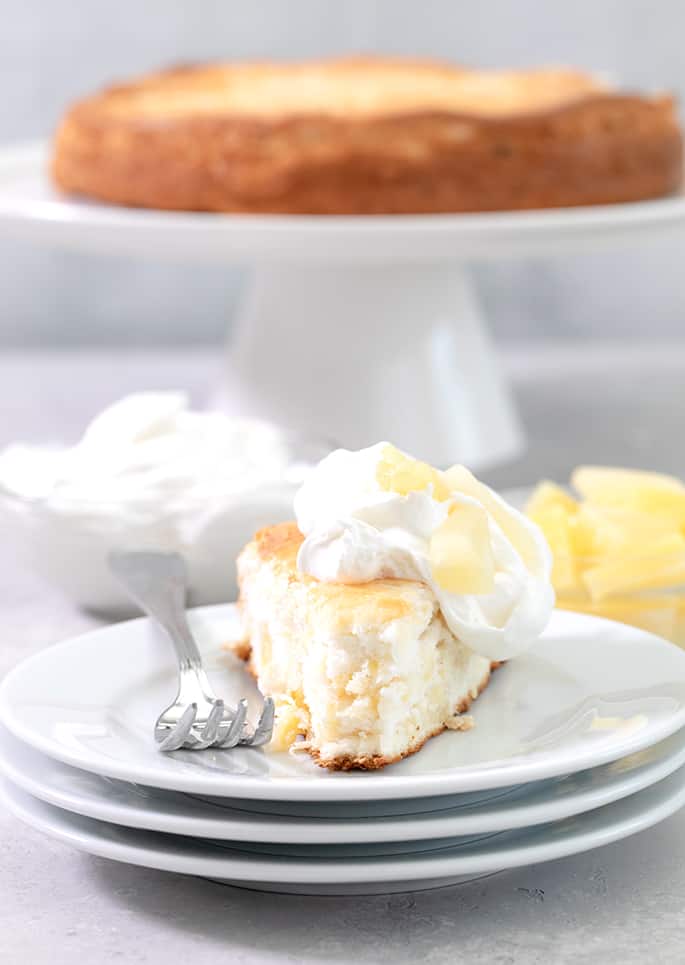 I only learned of even the idea of a pineapple gluten free angel food cake when one very special reader named Michelle. Michelle is one of the amazing moderators of the Everything GFOAS Facebook group. She's been with me since, well, forever, and she introduced me to the concept and asked me to help her out.

And any boxed gluten free angel food cake mixes that are for sale call for the addition of fresh egg whites. That's just silly. So we're making this recipe from scratch. But unlike the original angel food cake recipe, for which you must sift the dry ingredients, there's no need to do that here.

If you're already familiar with this cake (good on you!), you really don't have to invert it while it cools like you do with a traditional angel food cake. I tried doing that, and the cake kind of fell out of the pan and got an unattractive crater in the fall. 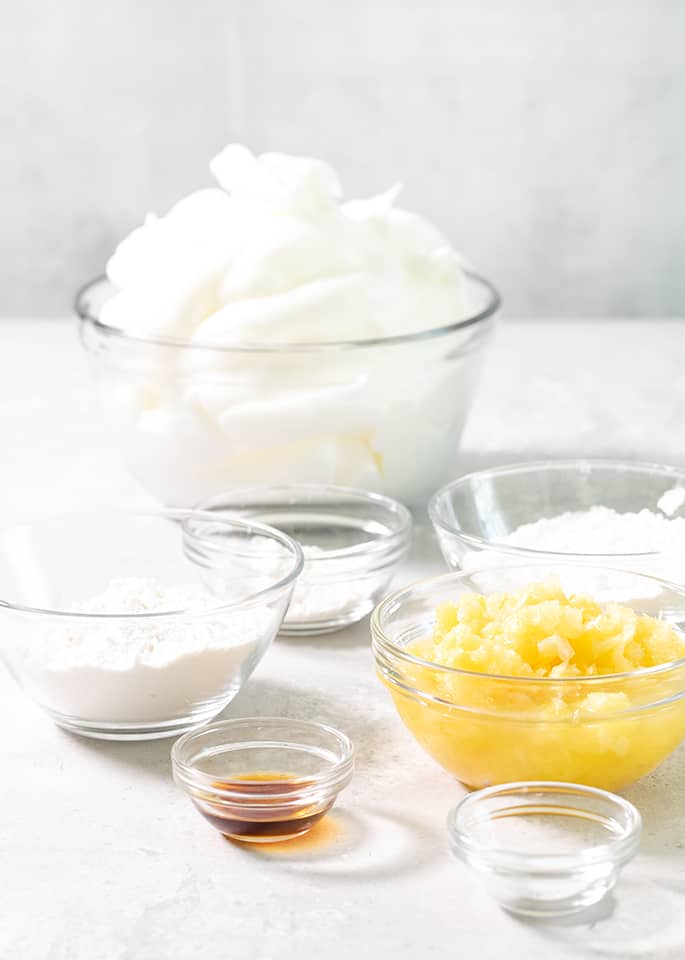 Are you intimidated by the idea of whipping all these egg whites to fold into this angel food cake batter? Don't be! There are a few tips I can share with you, and there are even a few shortcuts.

My first (and best) tip relates to temperature. When you're separating eggs, it's significantly easier to separate the white from the yolk without any yolk contaminating the white if you start with cold eggs, straight from the refrigerator.

The membrane around the yolk is fully intact when the egg is cold, so it won't leak out into the white. So I recommend cracking and separating your eggs cold. But then, allow them to warm to room temperature before whipping them, as room temperature egg whites whip much more easily. 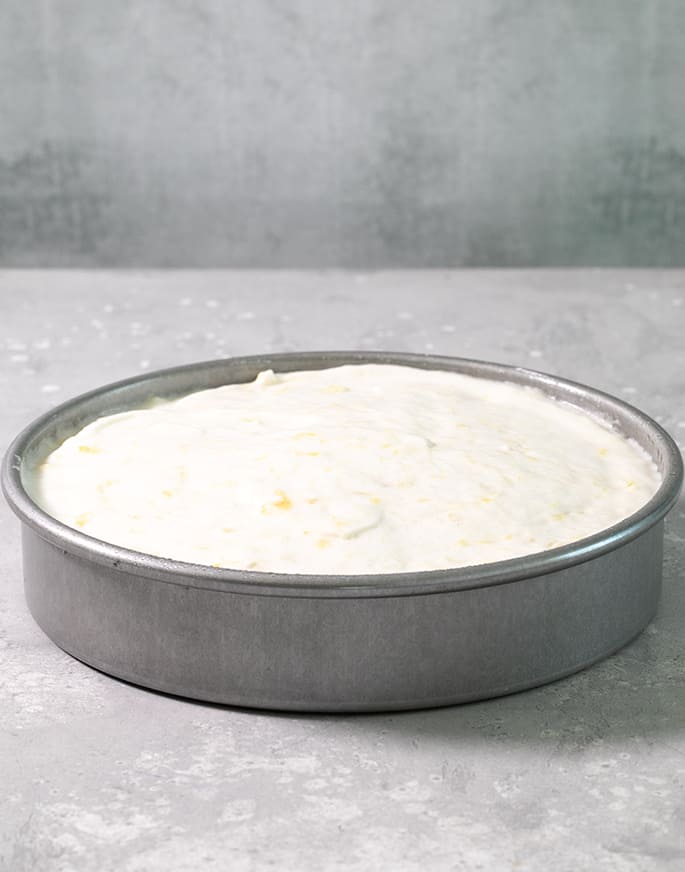 My second tip is to use a mixer (handheld is fine). I really don't recommend trying to whip them by hand, although I've done it and it is of course possible. It's just a lot of work, and I find that the whipped whites are less stable when made by hand.

Like the first tip, my third is about separating the eggs. Since egg whites will not whip if there is any fat at all in the bowl or on the mixer, and accidental yolk contamination does happen, crack each individual egg into one small bowl, then transfer the white to the large bowl. That way, if one yolk runs, it doesn't ruin all 8.

My fourth and final tip is more a shortcut than a tip: you can use up to half egg whites in the carton. When I've tried using a full 200 grams of egg whites from the carton, they haven't achieved enough volume in whipping, and the cake ends up dense. 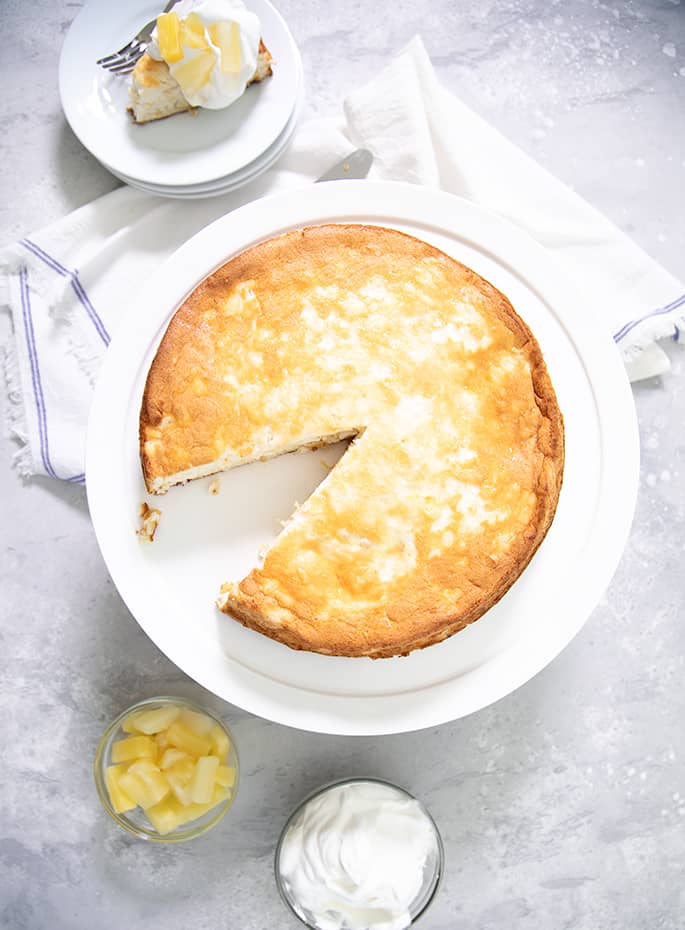 About the Weight Watchers Points

Weight Watchers hates sugar, and it hates fat. Keep them both in moderation, fill in with things like eggs and fruit, and you've usually got yourself a Weight Watchers-friendly recipe.

In this recipe, the vast majority of the SmartPoints comes from the confectioners' sugar. There isn't a ton of flour (not even one whole cup), and the crushed pineapple and egg whites make up most of the recipe.

As it is, if you cut the cake into 9 slices, each has 4 Weight Watchers points. Sugar just does that—but have you ever tried calculating the points in a slice of “regular” cake? Let's take the 4 points and be happy. :)

I've tried using less than one cup of confectioners' sugar in the recipe. Even the amount I've used here is a reduction from my original gluten free angel food cake recipe. The cake was much flatter and the texture was just off. Since there's no fat in the recipe, you need the sugar to tenderize.

But if you follow the suggestions below to make the recipe sugar-free and it works, then you win the Internet! And please be sure to let us know about it the comments. We might want to win, too. 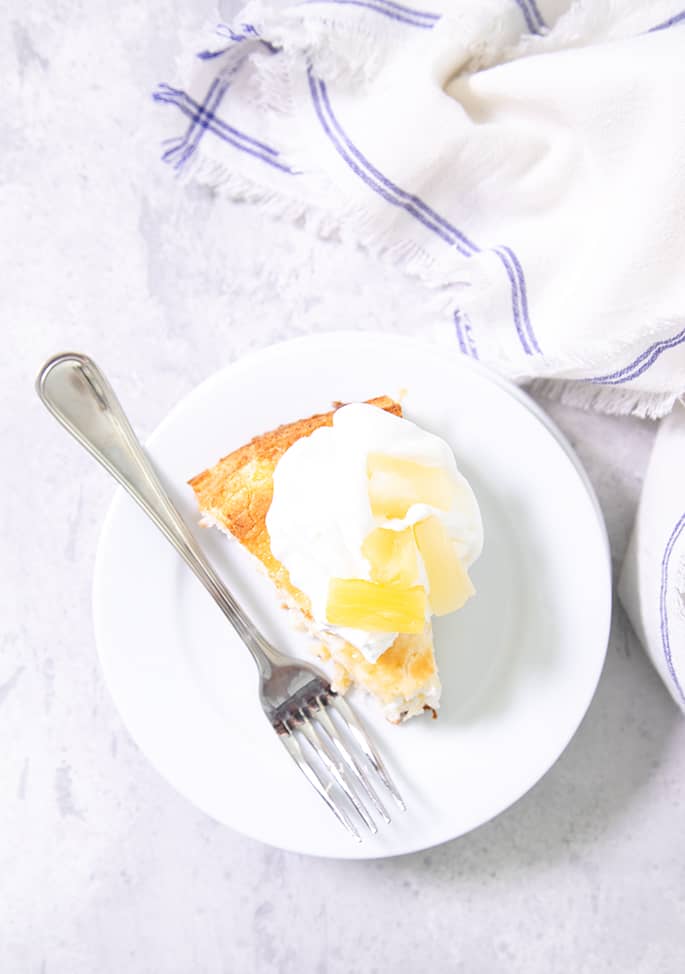 Dairy-free: This cake recipe is dairy-free as written, but the fat-free whipped topping contains dairy. It's also awful for you, filled with chemicals and other unhealthy things. But it's delicious. You can of course just leave it off your slice and you'll spare yourself the extra calories—and the chemicals and dairy.

Egg-free: This is a rough one! The only possible hope of making this recipe egg-free would be to use aquafaba in place of egg whites. I have not tried that, and it's a whole lot of egg whites.

But if you're feeling adventuresome, I'd recommend making half of the recipe in case it's a flop. You'll need a small pan—and a lot of cans of chickpeas.

Corn-free: The cornstarch can be replaced with tapioca starch or arrowroot. Most confectioners' sugar also has corn in it, though, so be careful you're using a corn-free brand if you have to avoid corn.

Sugar-free: I haven't made this recipe sugar-free, but Swerve's confectioners' sugar substitute should work just fine. In my experience, Swerve and other sugar substitutes have a tendency to be drying so you might need to add a bit more pineapple juice to the mixture.

Watch the video and be careful to match the texture of the batter in the original recipe. If you do make this recipe sugar-free, each slice of cake is reduced to 1 SmartPoint, and you win! ? 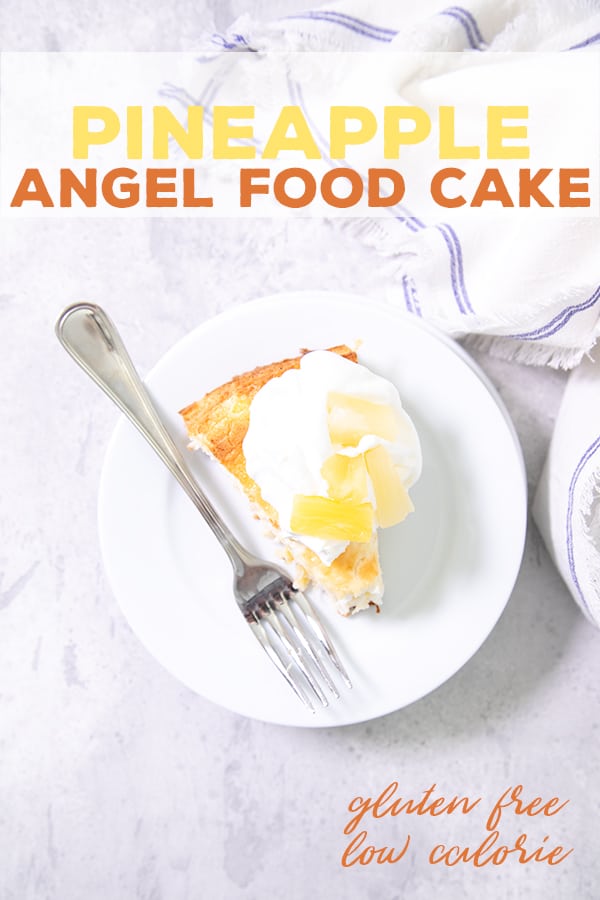 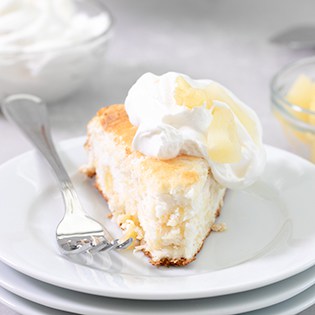