This no bake strawberry yogurt pie is made simply with plain yogurt, strawberry syrup, and whipped cream. Perfect for the warm weather!

This no bake strawberry yogurt pie is a (much better) riff on the yogurt pies I used to have as a kid. Those were a tub of thawed Cool Whip mixed with some strawberry flavored yogurt (probably nonfat, at least if it was the low-fat 90’s when everyone got fatter), pour into a premade graham cracker pie crust, and then frozen.

This pie is worlds apart from that one (which, sadly, makes me shudder when I recall the plastic taste). Lightly sweet, totally real and absolutely fresh and creamy.

Instead of strawberry flavored nonfat yogurt, we use full fat plain Greek yogurt mixed with a simple homemade strawberry syrup. Instead of Cool Whip, fresh whipped cream stabilized with some unflavored gelatin. You can skip the gelatin, but the pie will be much more icy in texture.

There will be leftover strawberry syrup (not a bad thing)

After I made the pie a few times, I bought more strawberries and made more of that gorgeous, bright red strawberry puree and have been drizzling it over gluten free waffles, mixing it into yogurt and stirring it into lemonade. 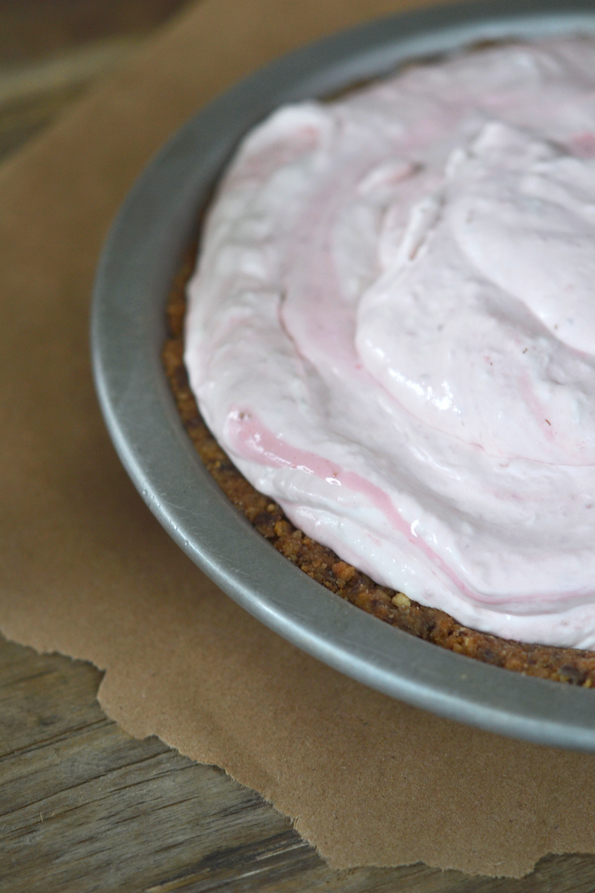 If you’re dairy-free, this is a tough recipe for you to make. You’d have to replace both the Greek-style plain yogurt, and the heavy whipping cream. I think it can be done, but I don’t think you’ll find Greek-style nondairy plain yogurt.

But if you can find nondairy plain yogurt, just place it in a fine mesh sieve positioned above a bowl. Allow the liquid to drain off until about 10 ounces of it become about 8 ounces of yogurt that is similar in texture to Greek-style yogurt.

In place of the heavy whipping cream, try using coconut cream from a can of full fat coconut milk. Place the can in the refrigerator overnight, upside down.

Remove the can from the refrigerator, open it, and scoop off the cream. Then, whip that cream with the confectioners’ sugar and proceed with the recipe as written.

You can make this recipe without the gelatin, but you’ll have to freeze it rather than just refrigerating it until set (because it won’t fully set). And if you freeze it without using gelatin, you’ll have a rather icy pie.

You can make this recipe with or without the crust. If you make it without the crust, I recommend lining the pie plate or springform pan well with parchment paper, to help prevent the pie from sticking to the pan.