Warm up from the inside with this recipe for homemade gluten free chicken noodle soup from scratch. Make the rich chicken stock ahead on the stovetop or instant pot. The secret to the best soup

There's a secret to making really good gluten free chicken noodle soup, and it's simple. Cook each element of the soup with only those ingredients that are essential to its success, and only when you need them.

I used to make homemade chicken soup by cooking everything together in the same pot, removing impurities and whole pieces by straining, and then serving all the cooked vegetables and chicken meat.

I added as much liquid as I wanted to serve. Then, I would boil the noodles in the stock, add back in the vegetables and meat, and serve.

Now, I make the stock as much as 1 week ahead of time by only boiling skin-on, bone-in dark meat parts with large chunks of vegetables. I assume that everything in that pot is going to end up without a ton of flavor, so I don't add anything that I plan to count on for serving, other than some surviving dark meat.

The white meat chicken is cooked separately. The gluten free noodles are boiled separately and only added to the soup on serving. Everything retains its flavor and texture. This recipe makes rich homemade chicken stock by boiling dark meat chicken with skin and bones with vegetables, bay leaves, salt and pepper. All the ingredients sacrifice their flavor, including the chicken and vegetables, to the stock.

The stock is very rich and flavorful, and can be used for anything you like, including making some of the best risotto of your life. Here, we're using it to make homemade gluten free chicken noodle soup.

Using fewer vegetables and only dark meat chicken parts makes the stock much more flavorful. You can stretch the stock a bit by adding some hot water and a bit more salt before serving. The stock can also be frozen in the wells of an ice cube tray and defrosted as needed.

The white meat breasts are cooked separately because they don't add much richness to the stock, and end up flavorless and almost dry if they're boiled along with the other ingredients. By cooking them separately, they add lots of flavor to the soup when it's served. Is there a shortcut way to make this soup?

Yes! I don't often make chicken soup completely from scratch like this.

Cooking it on the stovetop is very easy, but kind of messy. Using the Instant Pot with the instructions listed below is really very simple, but it still requires that I have a whole chicken in my refrigerator.

If you'd like to make chicken noodle soup without first making stock from dark meat chicken and vegetables, I don't recommend that you use store-bought chicken stock. I use Pacific brand chicken stock often for cooking, but not when it's such a prominent ingredient. 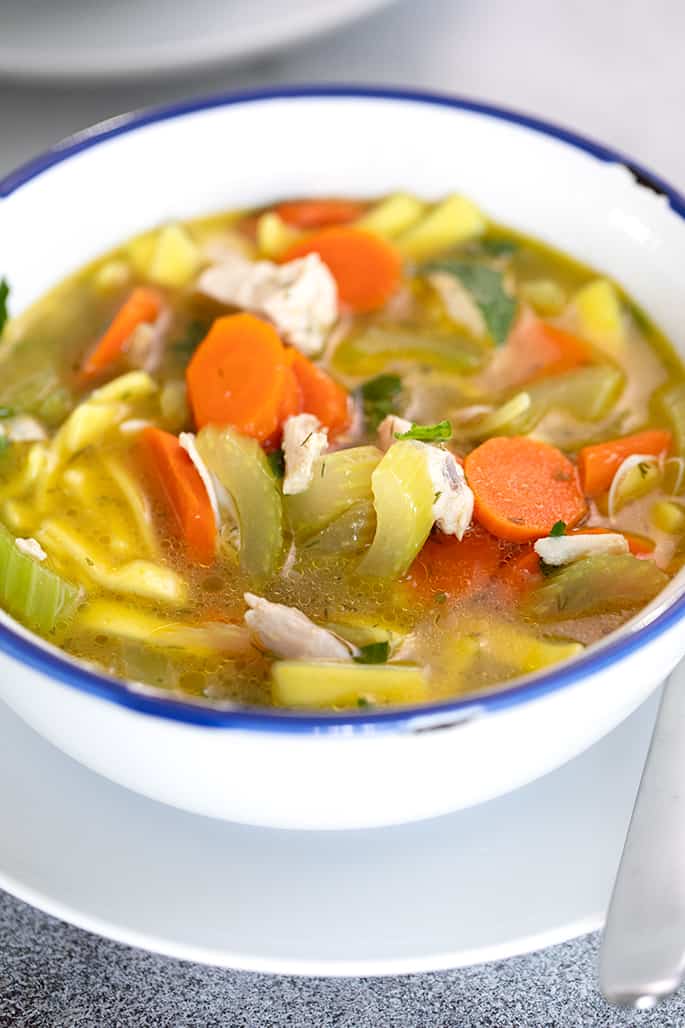 Which gluten free noodles work best for this soup?

I like rice noodles best for this recipe. I've used Thai Kitchen brand and Lotus Foods brand rice noodles, and I love them both.

You can use any sort of gluten free pasta noodle you like, but when I think “noodles,” I think something flat. I bet Barilla brand gluten free fettuccine would be great.

You can also take longer noodles and break them into smaller pieces before boiling. My family loved the long rice noodles.

The brand of gluten free egg noodles is Manischewitz. They're super expensive, and they taste awful. They're either tough, or mealy, and I paid nearly $7 for 12 ounces. Save yourself.

We now have a recipe for gluten free egg noodles that really make this recipe special. If you make every element of this recipe in stages, and make extra stock and extra noodles, you can eat well for days! 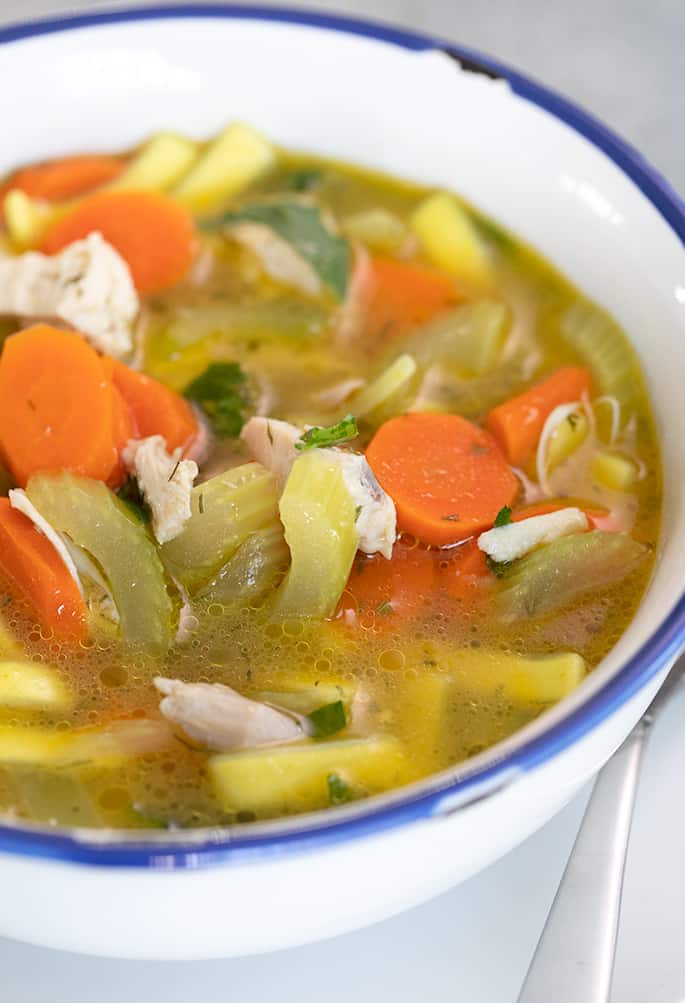 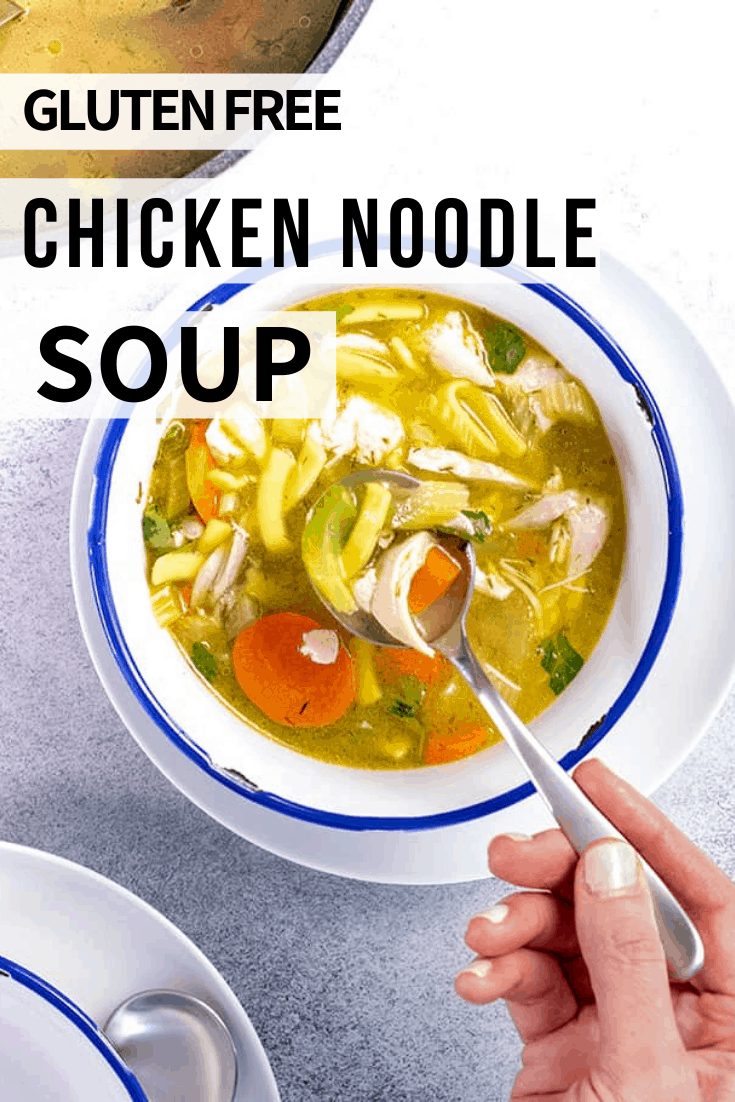 1/2 pound (about 4 medium stalks) celery, washed and roughly chopped (include any leaves)

Drizzle of neutral oil (like grapeseed, canola, or vegetable)

You can cook the breasts up to 3 days ahead of when you want to serve the soup, and just keep them in the refrigerator. The strained stock can be stored in the refrigerator in sealed containers for about 1 week, or frozen for longer storage.

For the noodles
I like Thai Kitchen brand or Lotus Foods brand rice noodles in this recipe. You can, of course, use your favorite gluten free pasta.

Since we cook the pasta separately and only combine it with the soup on serving, don’t shave off any cooking time from the pasta. Cook it how you’d like to eat it.