Gluten free chicken and dumplings is a savory blend of aromatic vegetables, chicken, a simple white sauce and just the right spices. Learn to make it in 4 unique ways for a simple, hearty meal any day of the week. 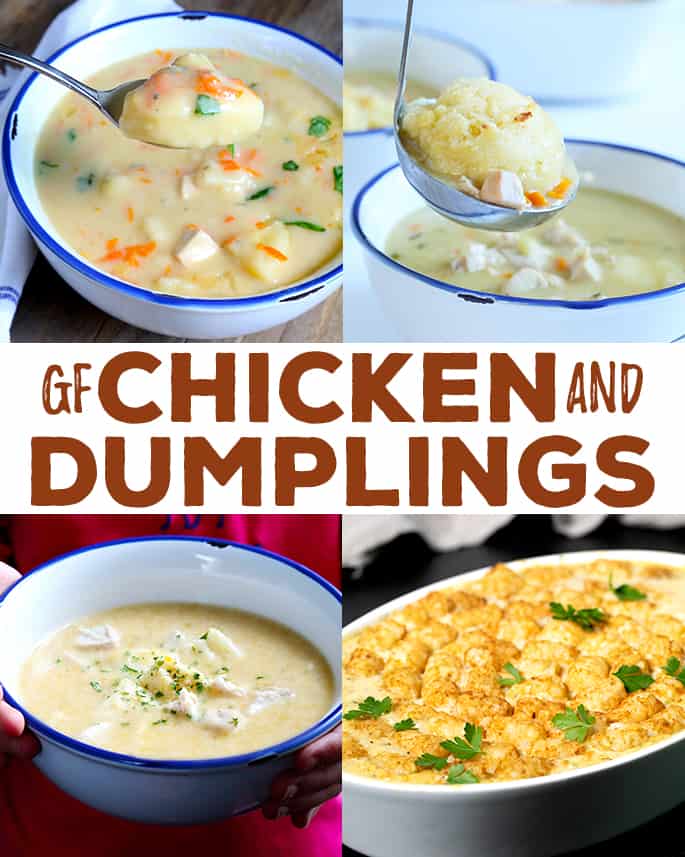 I put gluten free chicken and dumplings dinners into a very important category. No matter which way I make it, everyone in my family loves it because it hits all the right notes. It’s hearty, flavorful, and filling, and just smells like home.

There are, indeed, a few steps to getting it done. Chicken needs to be cooked and diced or shredded, vegetables cooked, and dumplings made. But most of those steps can be made or shortcut even days ahead of time.

Then all that’s left is to make the super simple roux-based soup, mix up the easy dumpling batter and bake. If I make the chicken and veg ahead of time, this is actually a quick and easy weeknight dinner.

Over the years, I’ve made so many varieties of this meal and kept them separated here on the blog. But I use these methods in a mix-and-match way in my own kitchen.

I thought you might like to see everything together in one place, with varying levels of ease and difficulty. Mix and match at will!

Classic Chicken and Dumplings Casserole (finished in the oven)

To make the most classic variety of chicken and dumplings, the dumplings are fluffy, airy rounds that are soft to the center. They’re simple to mix up and place on top of the aromatic filling that’s made on the stovetop. The raw dumpling mixture is scooped on top of the cooked filling and then finished in the oven. The soup starts with a mirepoix, or a sauteed mixture of diced aromatic vegetables like carrots, celery, and onion cooked in some sort of fat. The chicken in this recipe is cooked separately, but of course, it can be made ahead of time. I have also made this dish with gluten free rotisserie chicken and I thought it was delicious. My very spoiled children thought I was committing some sort of mortal sin.

If you love the idea of making a chicken and dumplings casserole but are tight on time or just want a fun twist, replace the dumplings with tater tots. 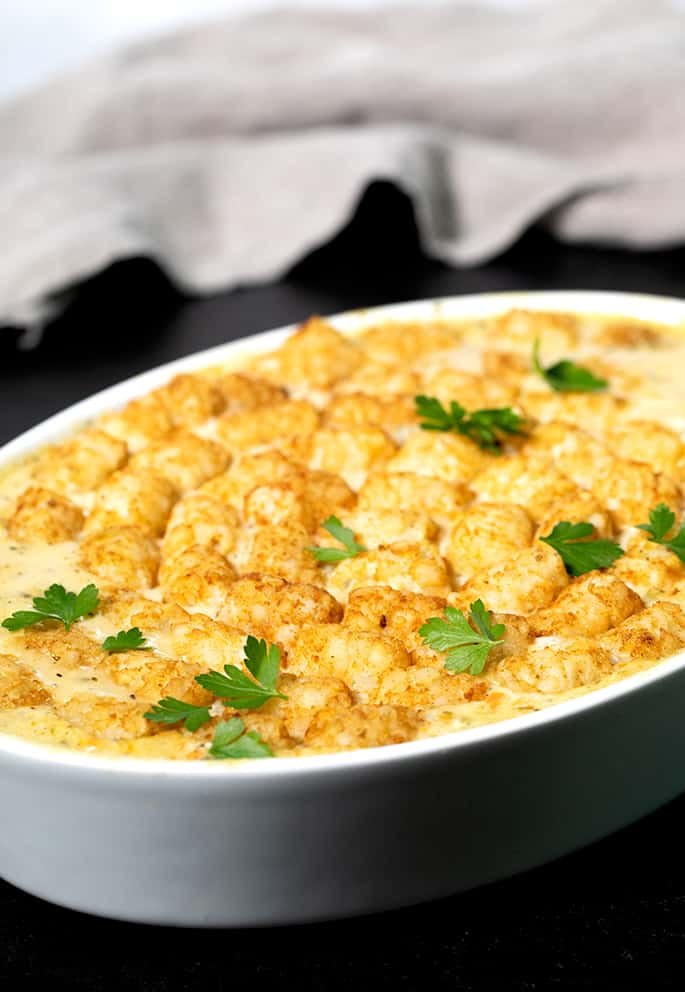 Like in all of the varieties except the slow cooker recipe, we use olive oil to cook the vegetables to help them release and develop their flavor. You really could use any sort of fat you like, though.

Olive oil is a healthy fat, and I always have it on hand. But of course, if you wanted to be truly decadent, you could saute some pancetta or bacon and then cook the vegetables in the rendered fat. *swoon* 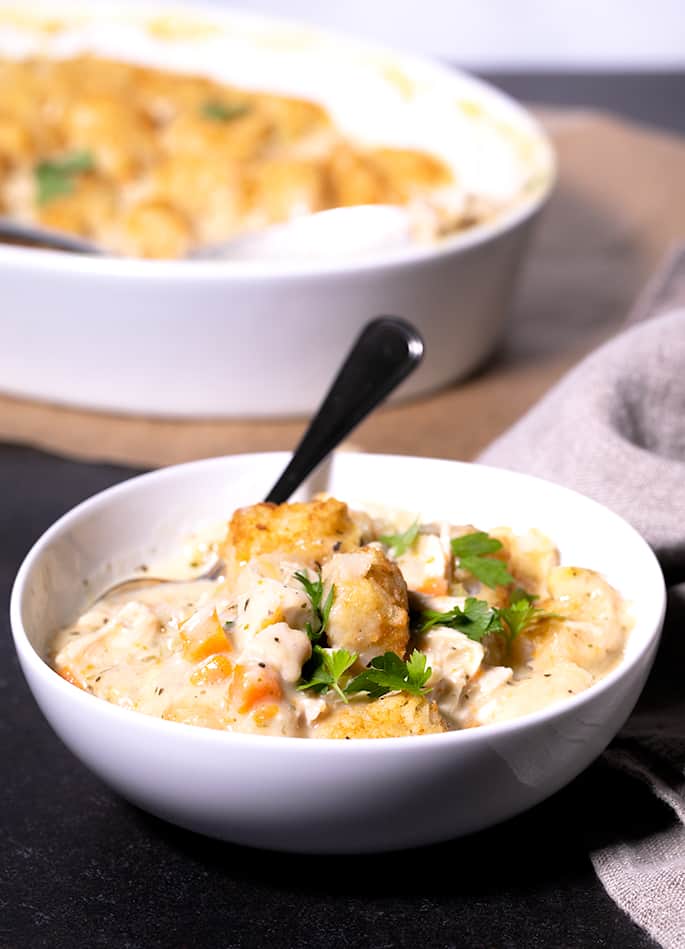 There’s no need to defrost the tater tots. Just arrange them on top in a single layer on top of the filling, and bake until the tots are crispy and golden, and the filling is bubbling. 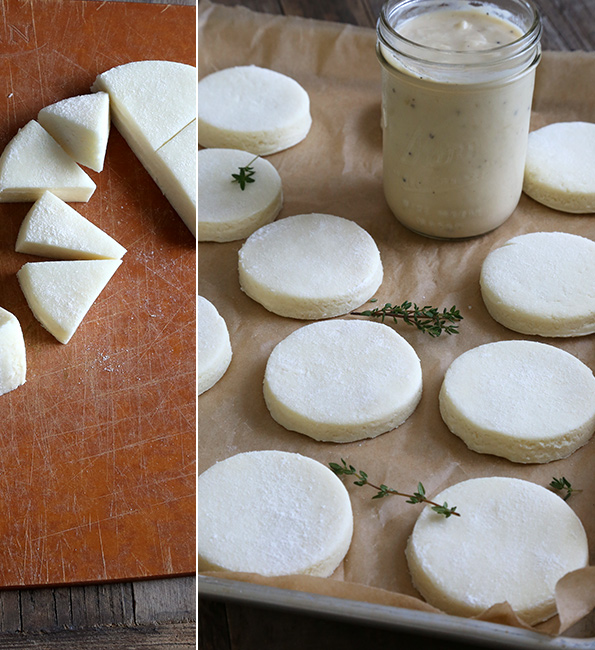 You’ll still need to cook the chicken separately according to the recipe instructions below, but that takes mere minutes and can also be made ahead of time. Simply cook the chicken, shred or chop it, and refrigerate it for up to 2 days. 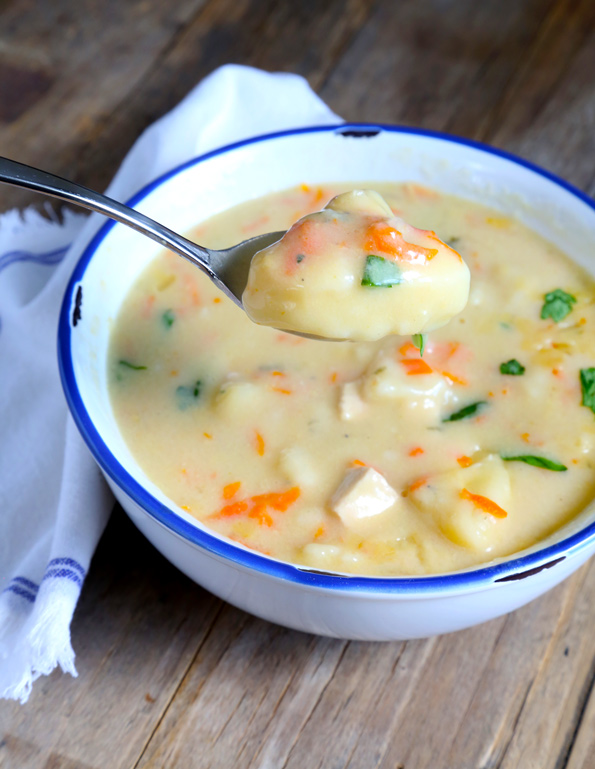 This version encourages make-ahead, of course, since you’ll need frozen biscuit dough. But you could also make it with the same dumplings from the casserole recipe.

The method is the same as using the biscuit dough, but you’ll need to make sure you’re using a large enough saucepan. Dumplings expand quite a bit when they cook in liquid.

Just cover the pan to retain enough heat in the pan, but lift the cover occasionally to stir the mixture gently. The same steps are necessary when using biscuit dough, but the biscuits won’t expand as much.

The final method is in the slow cooker, and it’s the easiest yet especially since you cook the chicken right along with the vegetables in the liquid. You’ll have to switch up a few ingredients, but it’s all explained below. Like the quick variety above, you can also replace the biscuit dough with the same dumplings mixture as the classic casserole. 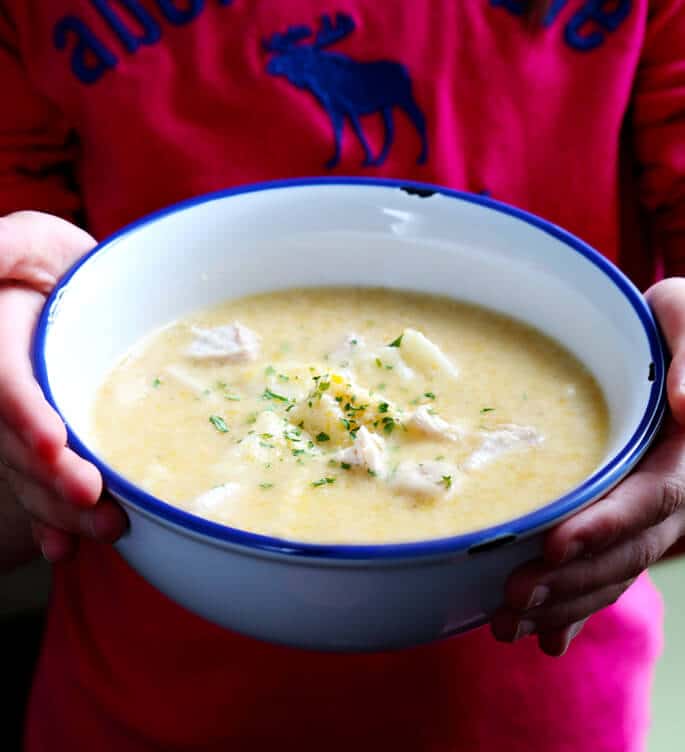 The main additional allergens in these recipes are dairy in the form of milk, butter and cream, and eggs (in the dumplings). I haven’t tried making chicken and dumplings with any of these substitutions, but here are my best guesses for how to make it happen.

For an egg-free variety, instead of dumplings or the biscuit recipe I have linked below, use my vegan gluten free biscuits. They’re light and flaky and they’ll work great. In fact, that’s the best way to make the dumplings dairy-free as well. You could also try the tater tot variety for a dairy-free “dumpling.”

You can buy dairy-free evaporated milk these days. I imagine it works quite well, although if it’s coconut milk-based, it may add some coconut flavor.

I haven’t made my homemade cream of chicken soup dairy-free, but that is only required for the slow cooker variety. A recipe like this has so many available modifications built right in, so there’s definitely a way! 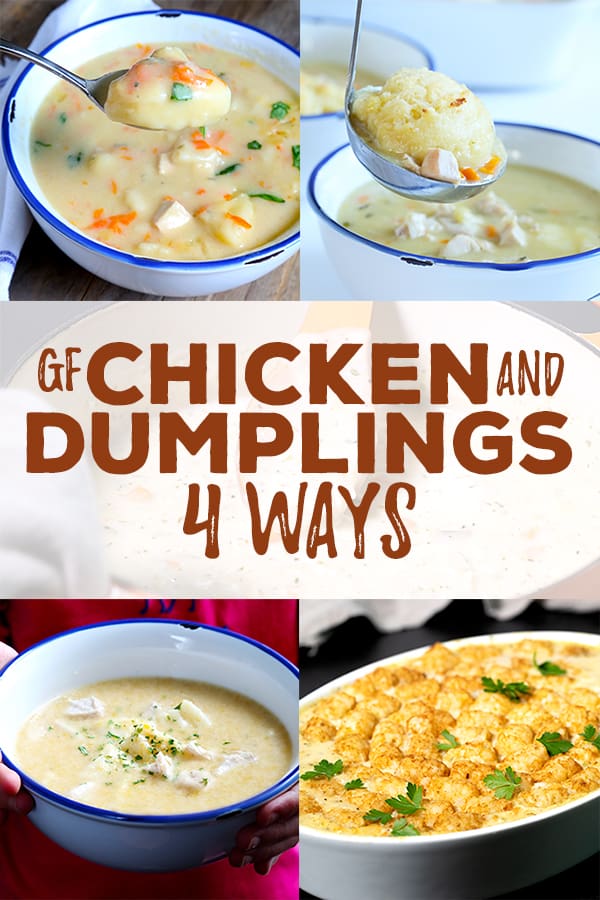 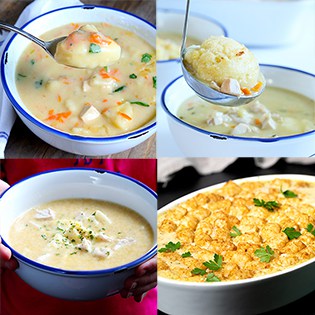 *For the “Quick Chicken and Dumplings” method, in place of the butter, flour, stock and half and half, use 6 cups (48 fluid ounces) of chicken stock and 1 recipe (about 24 ounces) gluten free cream of chicken soup

**For the “Slow Cooker Chicken and Dumplings” method, eliminate the butter as an ingredient. Add 1 1/2 cups (9 ounces) peeled and shredded russet potatoes to the vegetables. In place of the half and half, use 3 cups of milk and one 12-ounce can of evaporated milk. 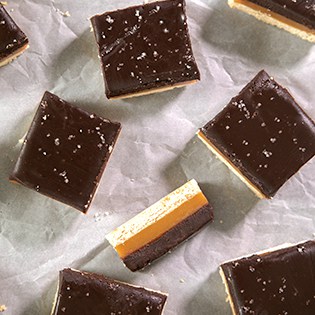 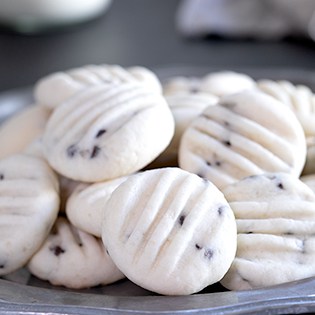