This gluten free pumpkin bread, topped with a crunchy layer of cinnamon sugar, is moist and tender, and packed with pumpkin flavor. Perfect for gifting this time of year! 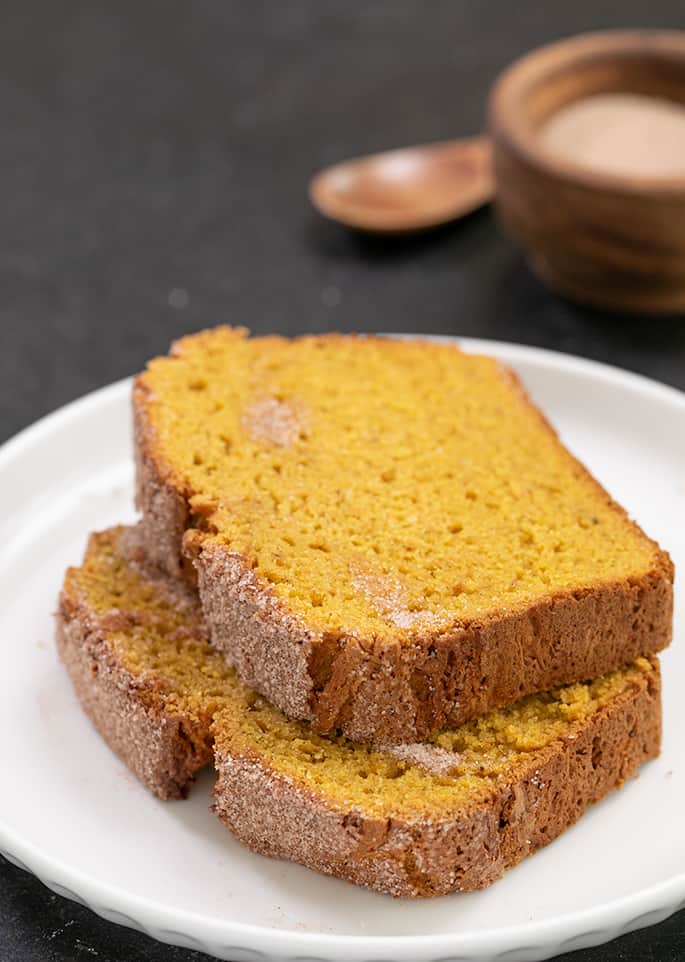 Classic gluten free pumpkin bread, made simply with just the right spices in one bowl. A moist, tender celebration of fall!

The brilliant color of the loaf comes from the pumpkin (of course), and the pumpkin pie spice. That’s just a simple, fall-like blend of cinnamon, ginger, allspice, cloves and nutmeg.

This pumpkin bread recipe is only lightly sweet, and very satisfying. The spices make it smell like fall, and the pumpkin butter make for the perfect rich, fall taste and tender texture.

Serve it for breakfast, instead of those fake pumpkin “flavored” cereals in the grocery store. I don’t even want to know what is in those! 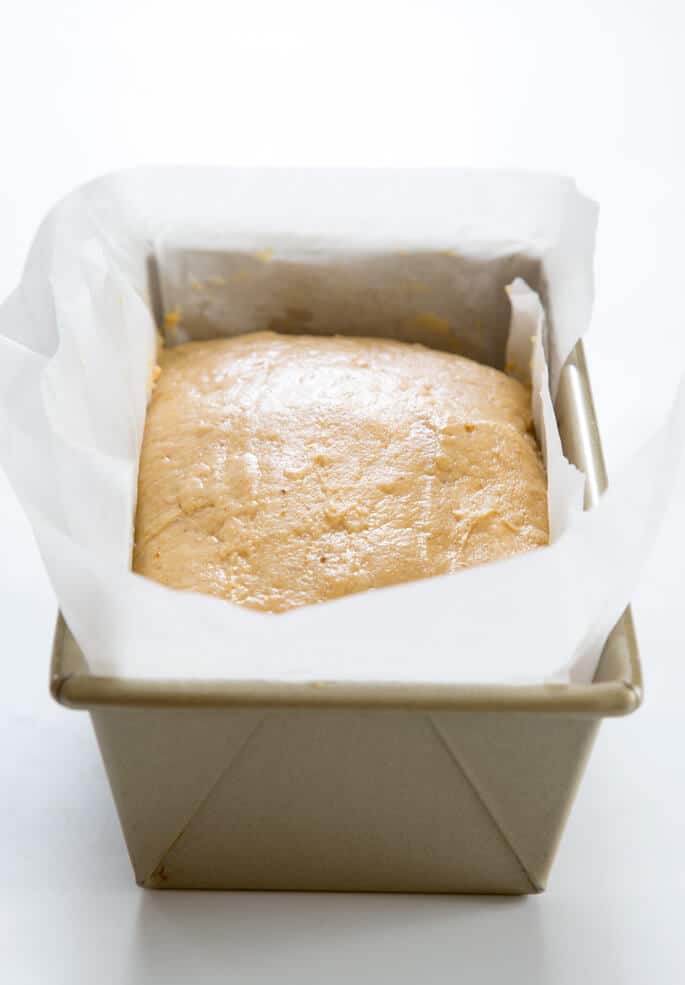 Even though the word “bread” is in the name of the recipe, this is a quick bread, not a sandwich bread. A quick bread is like a muffin or cake, but baked in a loaf pan.

It tends to be less sweet than a full-blown cake, which is what makes it more like a muffin. But the crumb is cake-like.

I don’t want to over-explain things that might seem obvious. But then I get a comment on a quick bread saying that someone was “very disappointed” in the recipe and their inability to make a sandwich on it…

The batter for this pumpkin bread is really very thick. It should be smooth and uniform in color before you transfer it to the loaf pan and bake it, but that can be a bit challenging since it’s so thick.

If you have a stand mixer, that’s the easiest way to get a uniform batter. Just use the paddle attachment and beat just until smooth.

I usually start out thinking I’ll be able to mix the batter with a spoon, get a bit frustrated and take out the hand mixer. The batter tends to climb up the beaters, but it’s easy to scrape off. And by that point, you’re really don’t mixing. 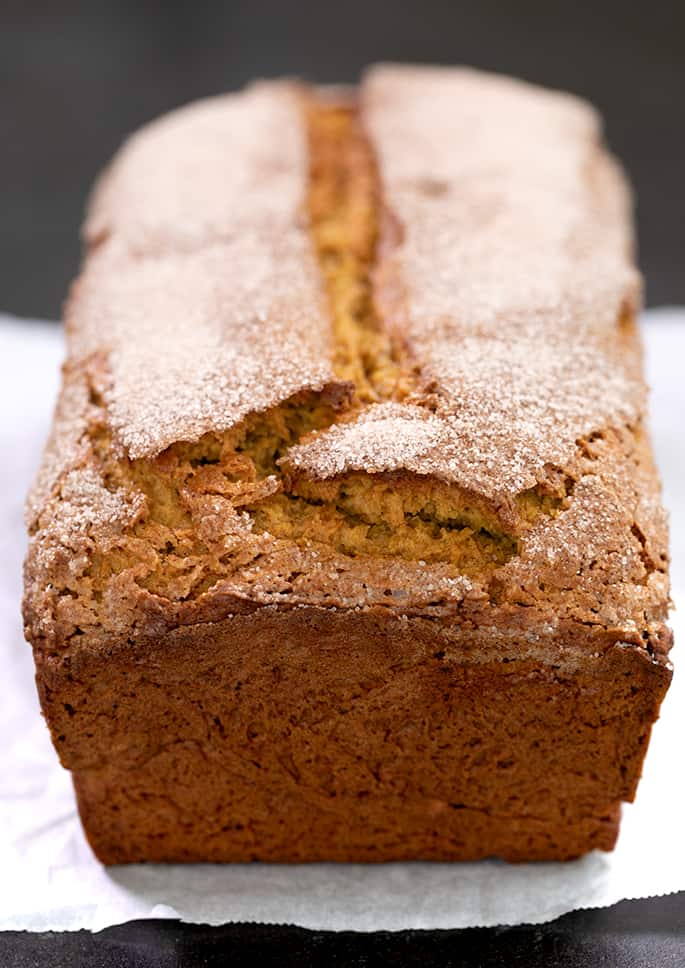 Dusting the top with cinnamon sugar is a good idea

Dusting the top of the bread with cinnamon sugar before baking adds some extra sweetness to a bread that doesn’t begin with a ton of sugar. Plus, it creates a thin, crackly layer that adds visual and textural interest.

I do have a recipe for gluten free cinnamon swirl pumpkin bread, too. That’s a much dressier version of this pumpkin loaf.

Adding a simple dusting of cinnamon sugar on this simpler recipe is an even simpler way to add texture, fragrance, and flavor. As a testament to how optional the topping is, though, I’ve made this recipe every year since 2013 without the dusting. But I doubt I’ll go back! 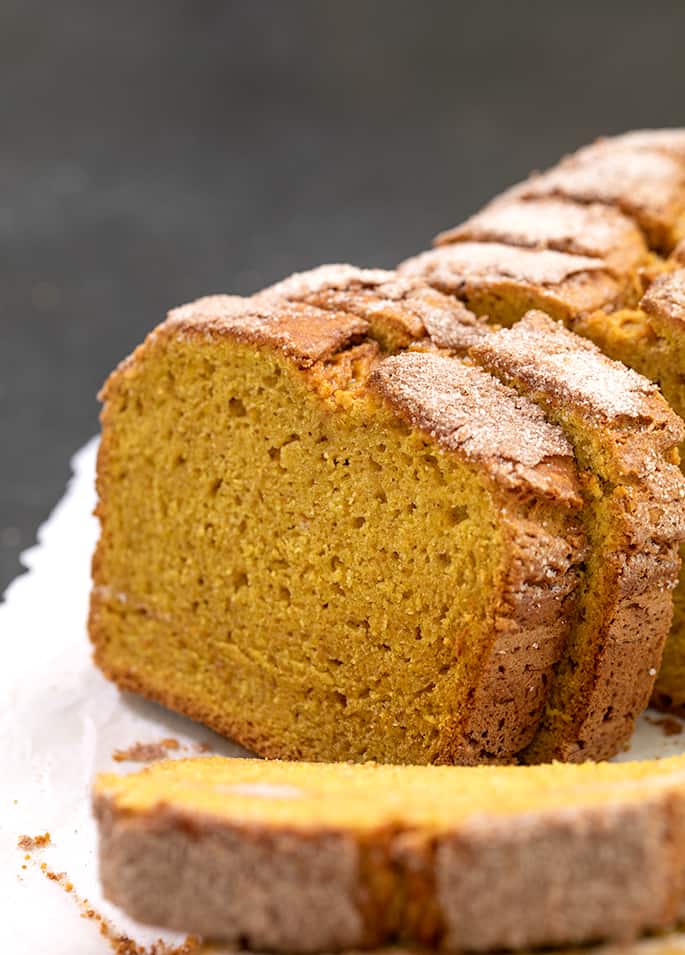 Replacing the dairy in this recipe means replacing the butter and the buttermilk. In place of butter, I recommend using vegan butter, and my favorite brands are Melt and Miyoko’s Kitchen.

If you can’t find one of those, or you can’t have coconut (both of those brands of vegan butter are coconut oil-based), maybe try one of the newer Country Crock brand “plant butter” sticks. They have one derived from avocado oil and one from olive oil. I haven’t tried them myself, though, so please report back if you do try them!

There are two eggs in this recipe. You can try replacing each of them with one “chia egg” (1 tablespoon ground white chia seeds + 1 tablespoon lukewarm water, mixed and allowed to gel).

If you can’t have corn, try using arrowroot. Even potato starch should work fine.

“Pumpkin butter” isn’t a nut butter. It’s a reduced, spiced, and sweetened version of pumpkin puree. You can buy it during the fall and winter seasons (I like Trader Joe’s brand), or make your own homemade pumpkin butter with my recipe (<—-linked).

I make a big batch toward the beginning of the fall season, and bake from it for weeks if not months. When I see it on the shelves, I also buy a couple jars. Remember, though, I’m doing a lot of recipe testing, so I need a lot ingredients so I can fail fail fail and live to try again another day! 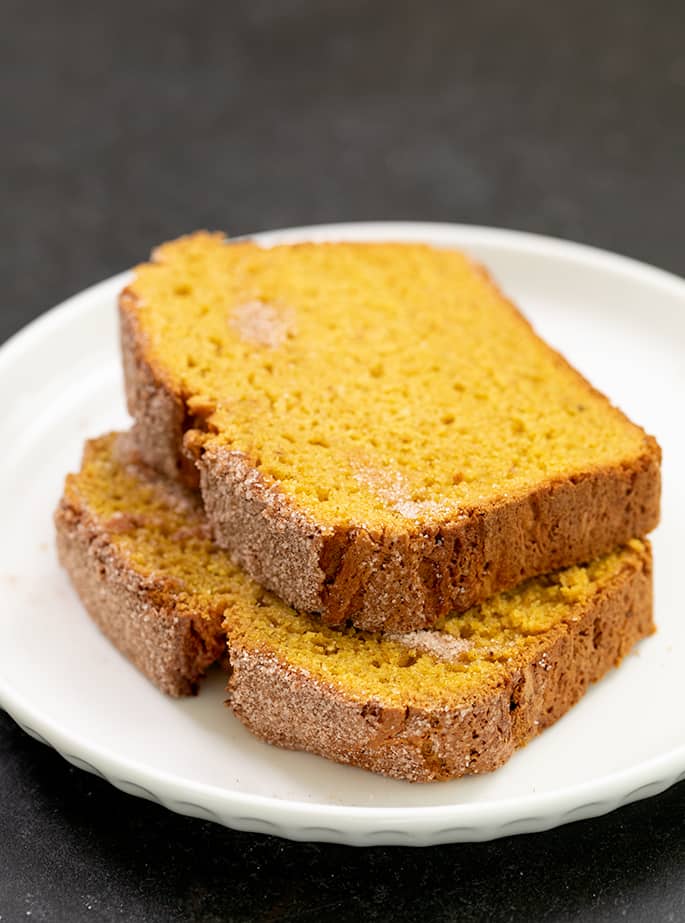 For the pumpkin butter
About half the time, I buy pumpkin butter (most often from Trader Joe’s), and the other half I make it using my recipe (linked above). The store bought pumpkin butter is usually more gooey, but the recipe is equally successful either way.

For the dusting cinnamon sugar
Dusting the top of the raw loaf of pumpkin bread with cinnamon sugar creates very thin, crunchy layer of fragrant sweetness. It’s entirely optional, though.

I usually keep a cinnamon-sugar mixture in a small, sealed container on my kitchen counter, since it’s just so useful. I use 1 full teaspoon ground cinnamon for each 3/4 cup of granulated sugar. You should add cinnamon to taste, though.