What makes this recipe special

Drop biscuits are a much simpler way to make pastry. They don’t require any real shaping, and although they don’t boast flaky layers, they have a tender fluffiness and crisp edges.

You begin with cold ingredients and handle the ingredients lightly, like you would with any pastry since you need cold pieces of fat (here, butter) to be surrounded by the remaining ingredients. When they hit the heat of the oven, the butter expands an creates a lightness.

Since they’re drop biscuits, though, there’s no shaping; there’s only scooping. If you take a classic drop biscuit recipe and just add some ground cinnamon and sugar to the mixture, your biscuits will just look discolored. To create a marbled biscuit, with pockets of light brown cinnamon bits and pockets of classic biscuit dough, you make the dough in two parts.

First, you whisk together the dry ingredients (GF flours, baking soda, baking powder, salt, granulated sugar) and add in the cold butter pieces. Second, separate out about 1/4 of the mixture by volume (just eyeball it; precision is not important) and mix in the ground cinnamon to that smaller portion.

Moisten each of the two portions with a corresponding portion of the buttermilk in the recipe. Begin by adding about 3/4 the buttermilk to the plain portion, adding more by the drop as necessary to moisten any dry bits.

Finally, add the rest to the cinnamon portion and combine the two gently. You don’t want to create a uniform whole. Instead, we want the cinnamon spiced chunks to interrupt the plain chunks. We just press them together into scoops. This recipe for gluten free cinnamon sugar drop biscuits only makes 6 biscuits. It’s just the right amount for a snack.

Since it doesn’t contain any eggs, I created a small batch recipe. When a recipe contains eggs, the rest of the ingredients must be in whatever proportions are appropriate for at least one whole egg (or egg white or egg yolk).

The recipe doubles very easily, though. Just multiply each ingredient by two, and follow the instructions as written. You’ll have 12 biscuits.

You can even double the batch, create 12 portions of dough and freeze half in a single layer. Store the frozen half in the freezer until you’re ready to bake them, and bake off the remaining 6.

When you’re ready to bake the frozen biscuits, you can bake them right from frozen. Make as many or as few as you like at a time.

Brush them with melted butter, sprinkle with cinnamon sugar, and bake at 350°F for 5 minutes and then increase the oven temperature to 375°F.

You’ll probably need to bake them for another 12 to 15 minutes, for a total of 17 to 20 minutes. But if you begin baking the frozen dough at the full 375°F as instructed in the recipe, they may burn before they’re baked evenly all the way through. 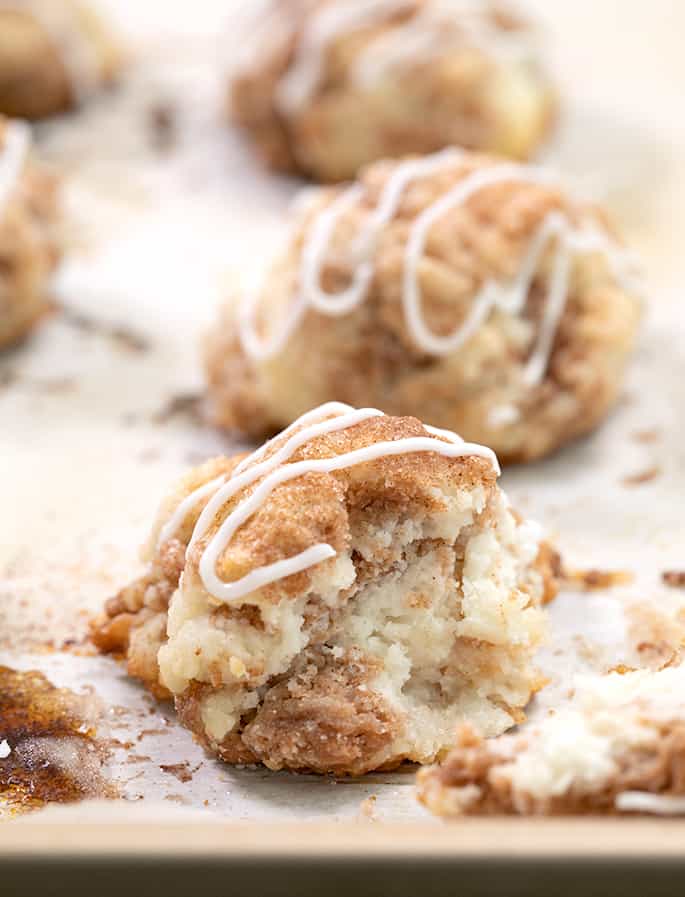 If you need to replace the buttermilk in this recipe, and you can have dairy, you can easily replace with 1/4 cup (65 g) plain yogurt + 1/4 cup (2 fluid ounces) milk. If you can’t have dairy, just use non-dairy plain yogurt and non-dairy milk unsweetened nondairy milk.

In place of cornstarch, which helps to lighten the flour blend, try using arrowroot. If you’re using a higher starch blend like Cup4Cup (or my mock Cup4Cup blend), replace the cornstarch with an equal amount (18 grams) of that flour blend.

This recipe is based on our recipe for plain gluten free drop biscuits. If you’d like a plain biscuit that isn’t sweet, and is a great complement to any meal, try that recipe instead! 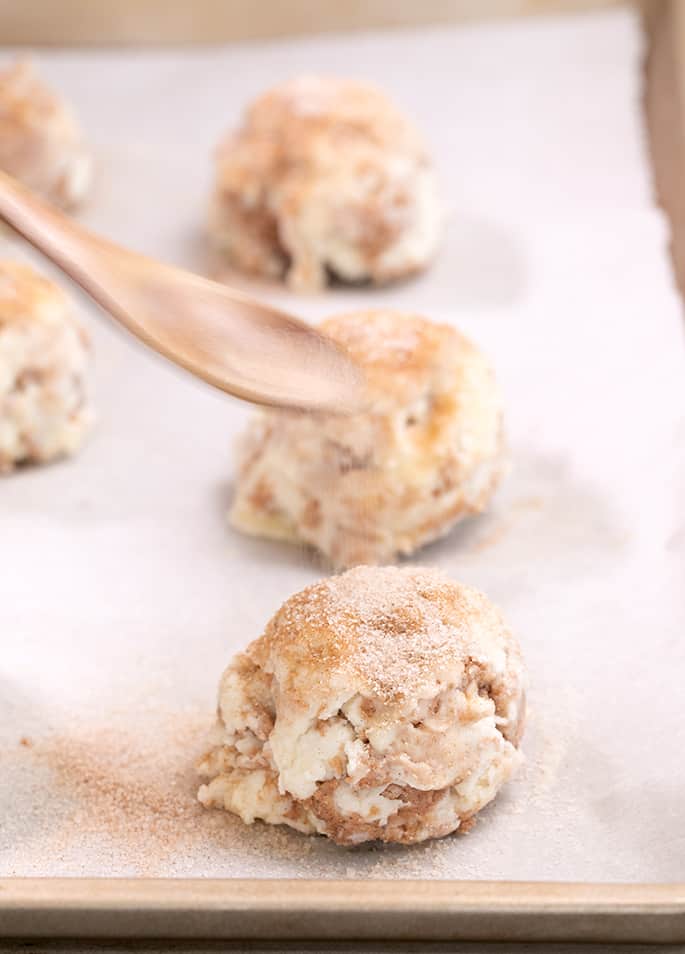 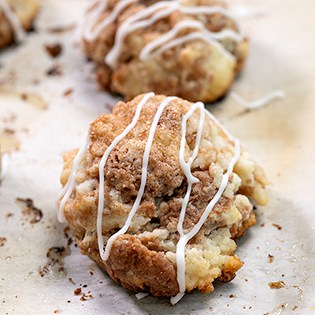 For the cinnamon-sugar mixture
I use 1 full teaspoon ground cinnamon for each 3/4 cup of granulated sugar. That’s a pretty spicy ratio. You should add cinnamon slowly, to taste.

Make ahead instructions
Biscuits of all kinds are easy to make in stages. Simply make the biscuit dough through scooping the raw dough and before brushing the tops with melted butter.

Place the shaped raw biscuits on a baking sheet and freeze them in a single layer. Pile them into a sealed freezer-safe container or bag until you’re ready to bake them.

You can bake them right from frozen. Brush them with melted butter, sprinkle with cinnamon sugar, and bake at 350°F for 5 minutes and then increase the oven temperature to 375°F. You’ll probably need to bake them for another few minutes total. 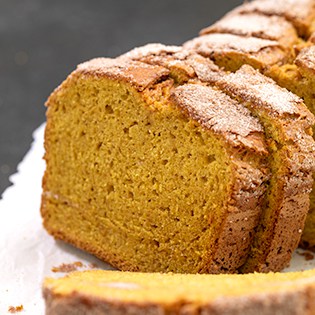 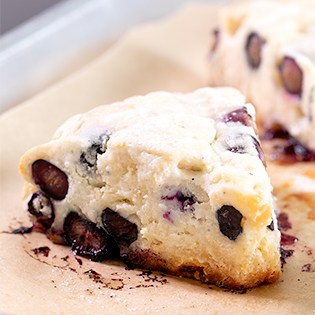 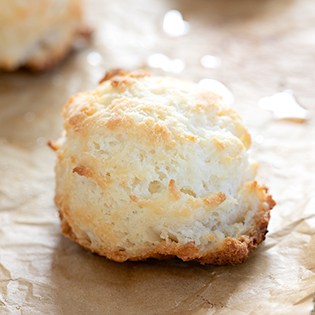