These decadent gluten free brownie ice cream sandwiches are made with the fudgiest brownies split between two pans, baked, and layered with homemade no churn vanilla ice cream. 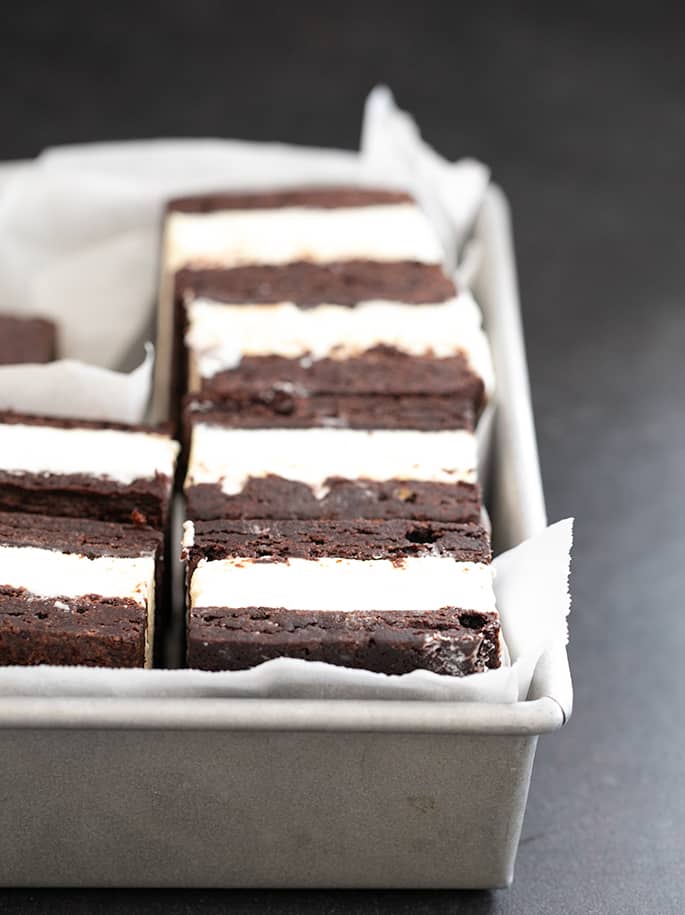 Whenever you're making homemade ice cream sandwiches, you want to be able to bite into the sandwich without having it fall into your lap in pieces. That's a basic requirement, right? 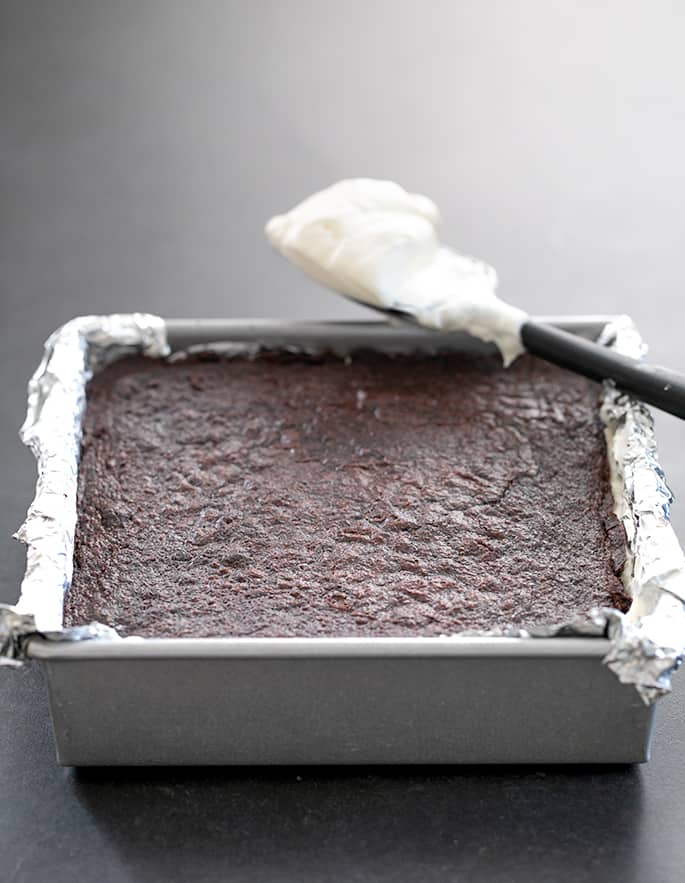 …made in two square pans

You may be tempted to bake the brownie batter in a single 9-inch x 13-inch baking pan, rather than 2 square pans. I have tried baking brownie recipes in a larger pan, but I find that the edges burn before the center has a chance to fully set.

It's particularly important for these brownies to bake up flat (without a dome toward the center), and stable. You'll have to transfer one of the uncut layers on top of the ice cream, which is on top of the other brownie layer, still in its pan.

Freezing the baked and cooled brownie layers helps make them easier to handle. But if your brownies are too cake-like, or underbaked at all, you'll find it difficult to layer them. 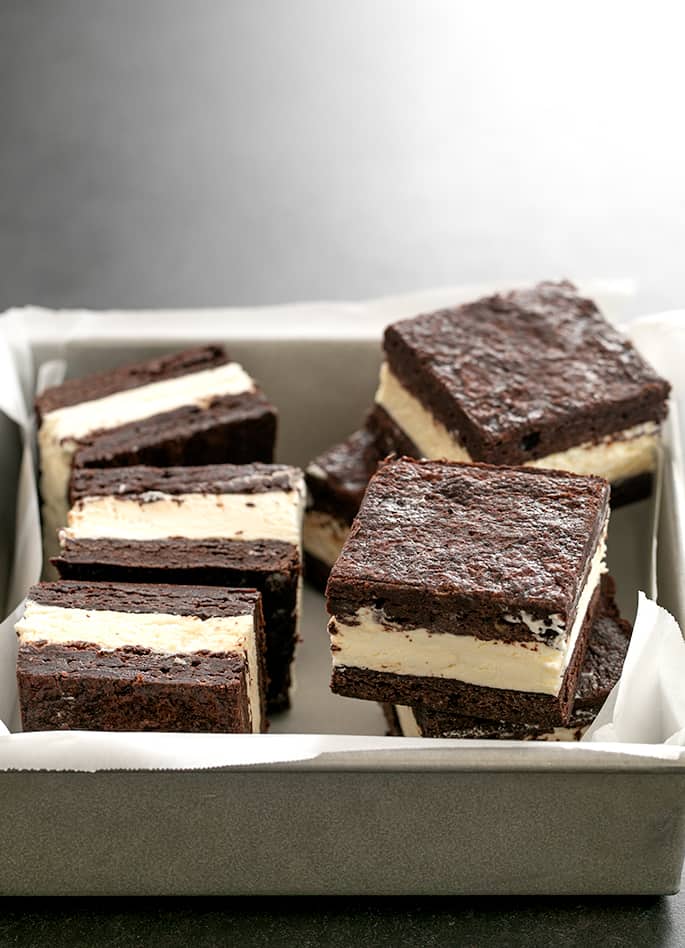 In the warm weather, I make quite a bit of homemade ice cream. It's far from the only ice cream my kids eat in the summertime, but it's so useful to have still-unfrozen freshly “churned” ice cream for making into ice cream pops and ice cream sandwiches.

Once ice cream has been churned, or no-churned like our homemade no churn vanilla ice cream, it's soft and fluffy, and so easy to spread. You can see it in the how-to video included in this post.

If you don't want to make homemade ice cream, you can use store-bought ice cream. The easiest way to do it is to buy a cardboard quart-sized or larger container of ice cream and literally slice through the cardboard horizontally with a sharp knife, at least 1-inch thick.

Peel away the container that remains on the slab of ice cream, and place it on top of the bottom brownie layer, still in the pan. You'll probably need two slices to place side by side on the brownies. Top with the other brownie layer. 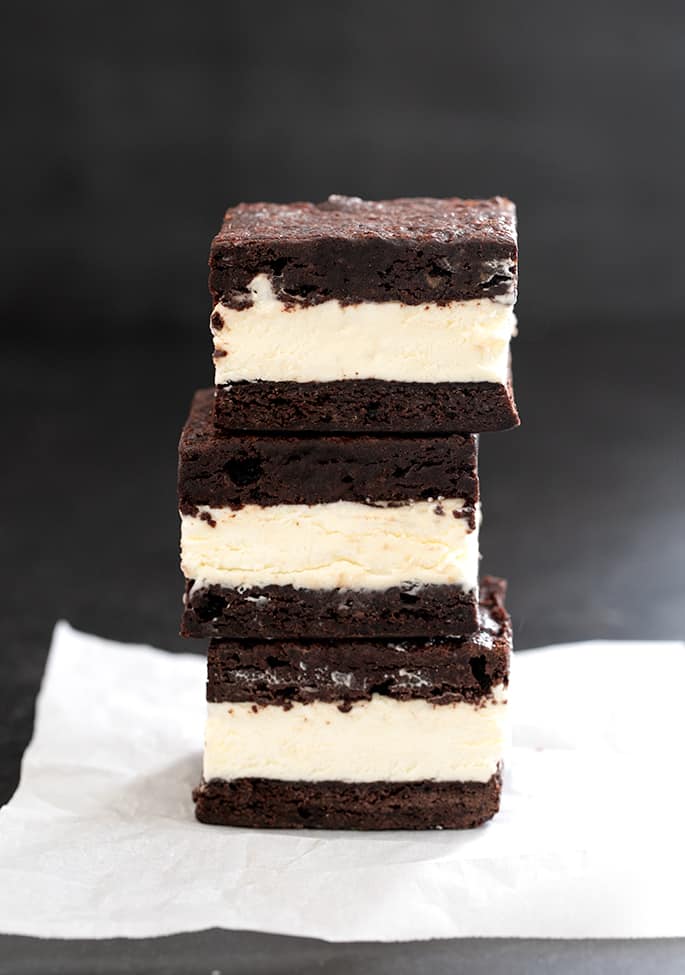 You can make the brownies without dairy, and I've even tried it myself. Replace the butter with an equal amount by weight of Earth Balance Buttery Sticks, or vegan butter like Melt or Miyoko's Kitchen brand, and the cream with nondairy milk (not non-fat!), use nondairy chocolate.

If you do use Earth Balance, eliminate the salt as an ingredient. Buttery Sticks are already pretty salty.

If you're egg-free, you can try using two “chia eggs.” A chia egg is 1 tablespoon ground chia seeds mixed with 1 tablespoon lukewarm water and allowed to gel. I can't promise it will work, though, as I haven't tried it in this recipe. 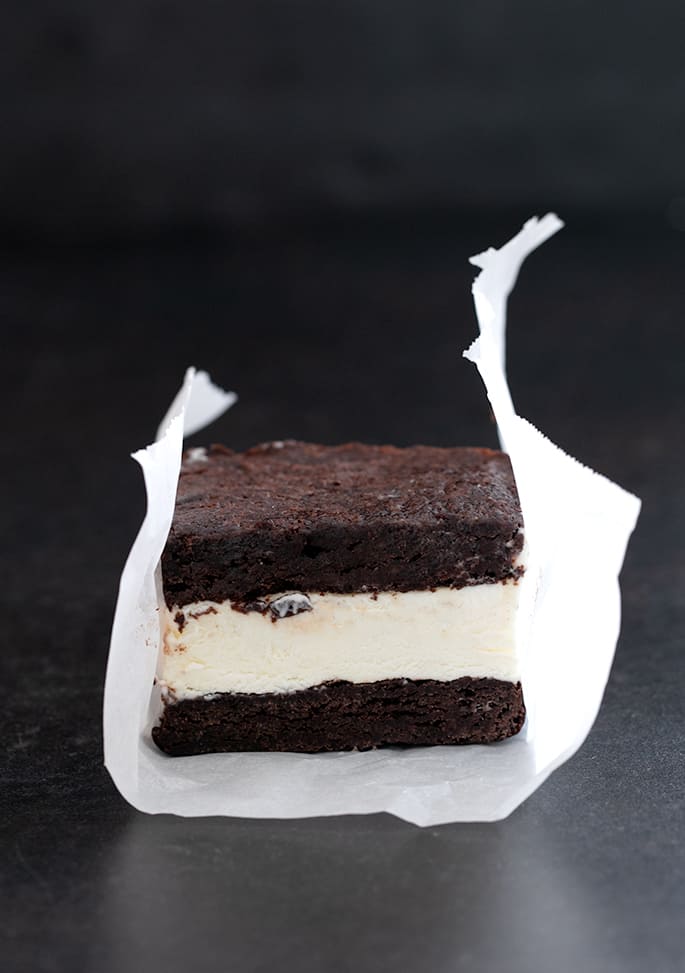 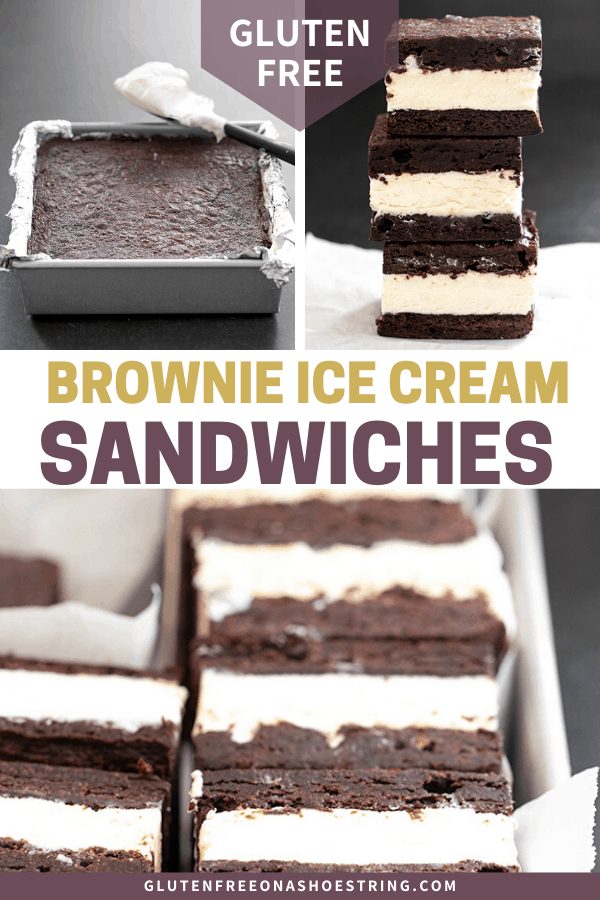 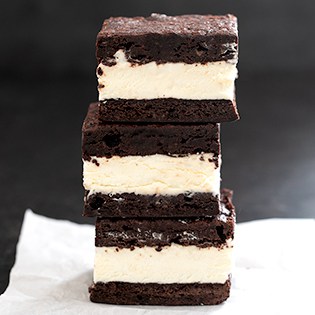