These Weight Watchers brownie bites are made with applesauce and just the right amount of brown sugar for 3 SmartPoints for 2. Gluten free brownies at their absolute best! 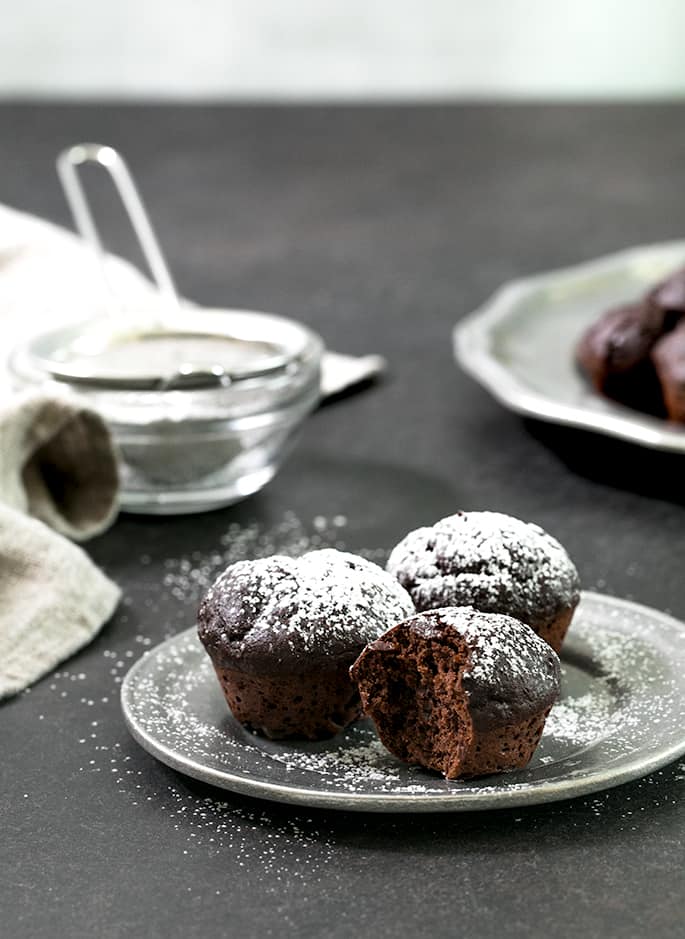 These brownie bites are made with regular baking ingredients, and there are only 3 SmartPoints in 2 brownie bites. They're not overly sweet, but they're tender and chocolatey and honestly quite satisfying.

I'll be the first to admit…that I don't fully understand Weight Watchers. I get that Oprah likes it now and that there's a point system. I've always appreciated the fact that, when you're on Weight Watchers, you eat your own food rather than plastic prepared meals.

I have mixed feelings about “dieting” in general since I have two teen/tween daughters and I'm desperate for them to maintain a love of food and respect their bodies. I don't want them counting everything they eat at their age. They should eat when they're hungry, stop when they're full and eat a balanced diet. Done. But when they're in their 40s like I am, things may change a bit…

Since there are so many “zero points” foods that are pretty much “free” for you to eat throughout the day, it makes baking quite a bit easier. This Weight Watchers brownie bites recipe isn't the first WW-friendly recipe I've ever published, but it's the one I feel best about. They're just so normal, you know?

Of course, if you do want truly “normal” in general, I've got 15 amazing recipes for gluten free brownies just waiting for you. :) 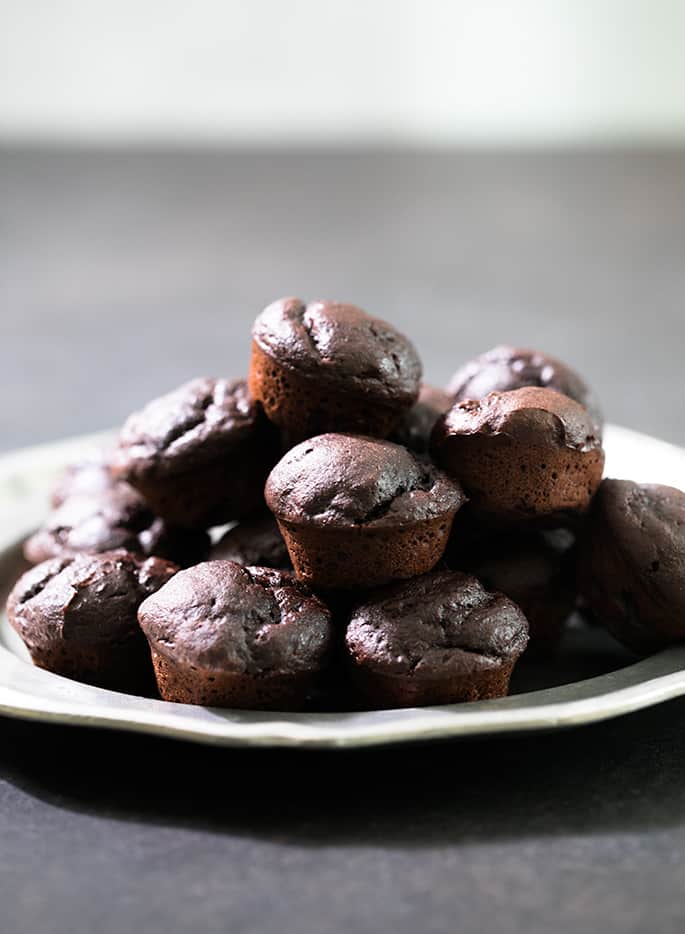 Please do pay careful attention to exactly the ingredients that are called for in the recipe, including the manner in which the ingredients are to be prepared. Low-fat/low-sugar baking has its own rules, and we must obey!

For example, I've found that the batter is much looser and the brownies more tender when both the yogurt and the applesauce are warmed slightly before adding them to the batter. You also want to be sure to mix until just combined. 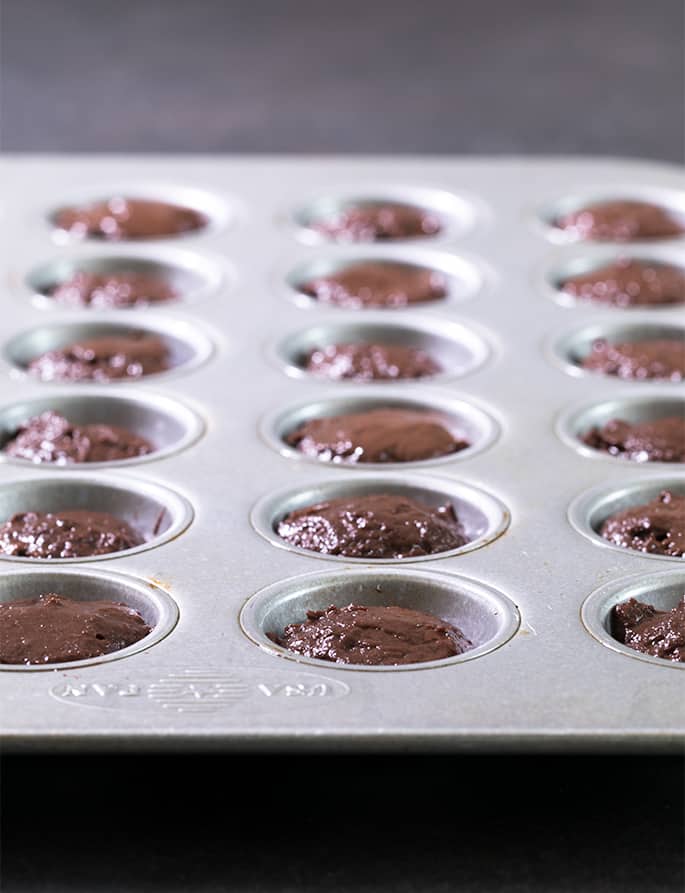 What's different in this recipe?

My original recipe for two-bite gluten free brownies is one of my absolute favorites ever. I make them all the time because they're always well-received by literally everyone.

They're rich but not too rich, chocolatey but not overwhelming, and they're just exactly the right size. When someone has a birthday or a bake sale, that's my go-to recipe.

This recipe isn't exactly the same because it doesn't have all that butter, and has quite a bit less sugar. But with Weight Watchers allowing eggs, applesauce, and nonfat Greek-style plain yogurt for absolutely zero points, and even unsweetened cocoa powder for very few points, it is possible to cut back on fat and sugar and still have a tender muffin. 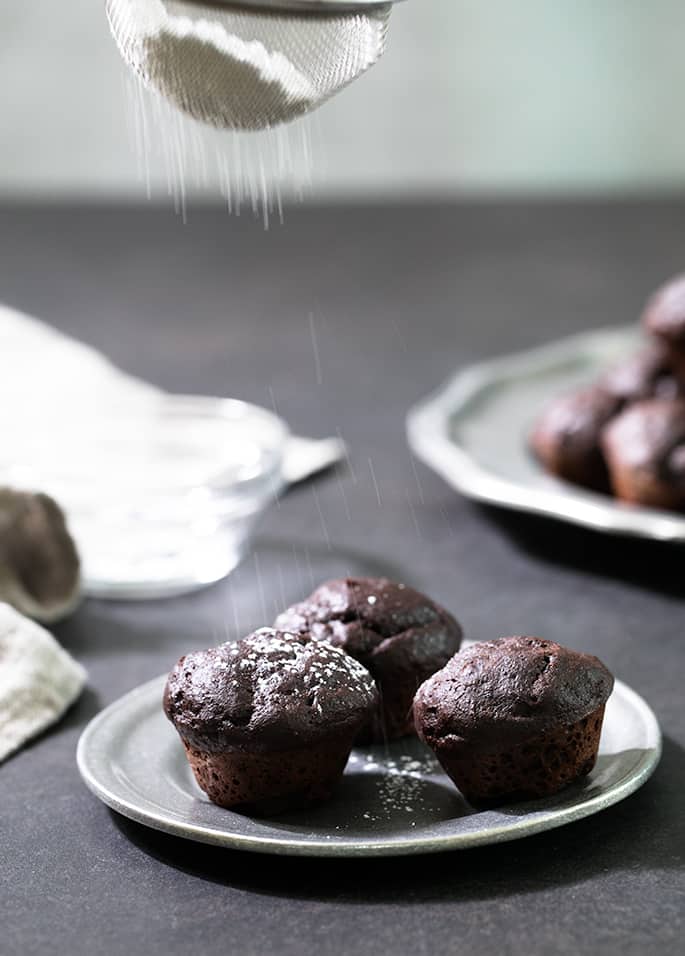 These brownies can most likely be made quite allergy-friendly, but each substitution discussed below will change the Weight Watchers SmartPoints value, and not for the better. Give with one hand✋?, take with the other✋?.

Dairy-free: These brownies are nearly dairy-free all on their own, except for the nonfat Greek yogurt. It's easy to replace that with Greek-style nondairy plain yogurt (Anita nondairy coconut milk yogurt is my favorite brand), but I don't know of any non-fat dairy-free plain yogurt. The Weight Watchers points will definitely be different, and not in a good way.

Egg-free: A “chia egg” (1 tablespoon ground chia seeds + 1 tablespoon lukewarm water mixed and allowed to gel) is probably a pretty good substitute for each egg, but the egg yolk is a different story. It adds fat, which is crucial in these low-fat brownies since fat is a tenderizer and creates a smooth mouthfeel. You might be able to replace the egg yolk with another tablespoon of neutral oil, but that will add more points.

Sugar-free: I haven't tried replacing the brown sugar with a sugar-free alternative, but you might be able to replace it with Swerve brown sugar replacement. I find that Swerve tends to absorb a lot of moisture, so if you find that the batter is too thick, try adding some warm water by the teaspoonful until it reaches the proper consistency.

Push play ▶ to watch me make them, then make your own and enjoy a light 3-point treat! 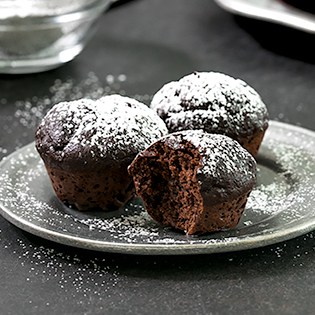 Confectioners’ sugar, for dusting (optional and NOT included in SmartPoints value)