Gluten free pumpkin cupcakes with pumpkin butter and topped with pumpkin icing or cream cheese frosting, made full-sized or mini. The best of the season! 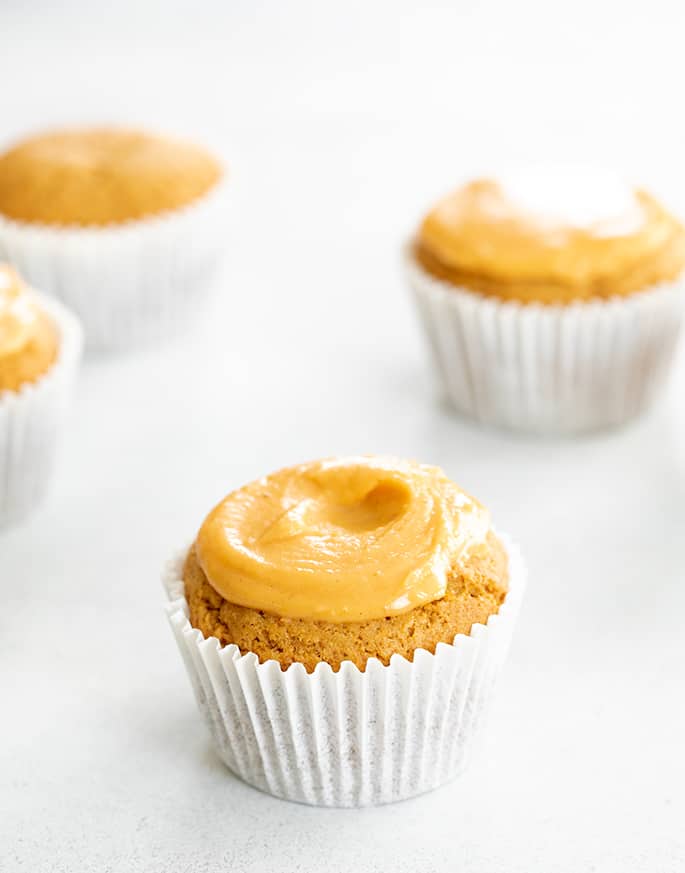 On a brighter note, I am digging this baking-with pumpkin-butter thing! You really can’t match the depth of flavor in pumpkin butter with an equal amount of pumpkin puree – canned or fresh. 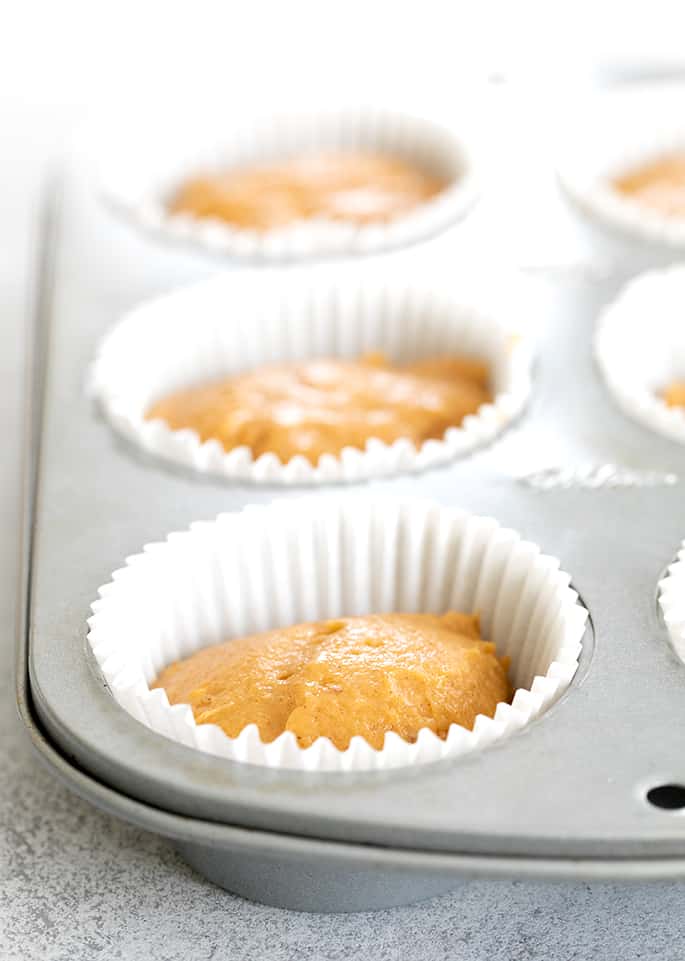 I made mini cupcakes thinking that I would pack some in my kids’ lunches this week. They’re always talking about those little bags of “mini bites” that Nabisco or somebody or other makes. These stay moist enough that they’ll survive a few days on the counter so you can keep packing them for lunch – minus the frosting or icing of course. 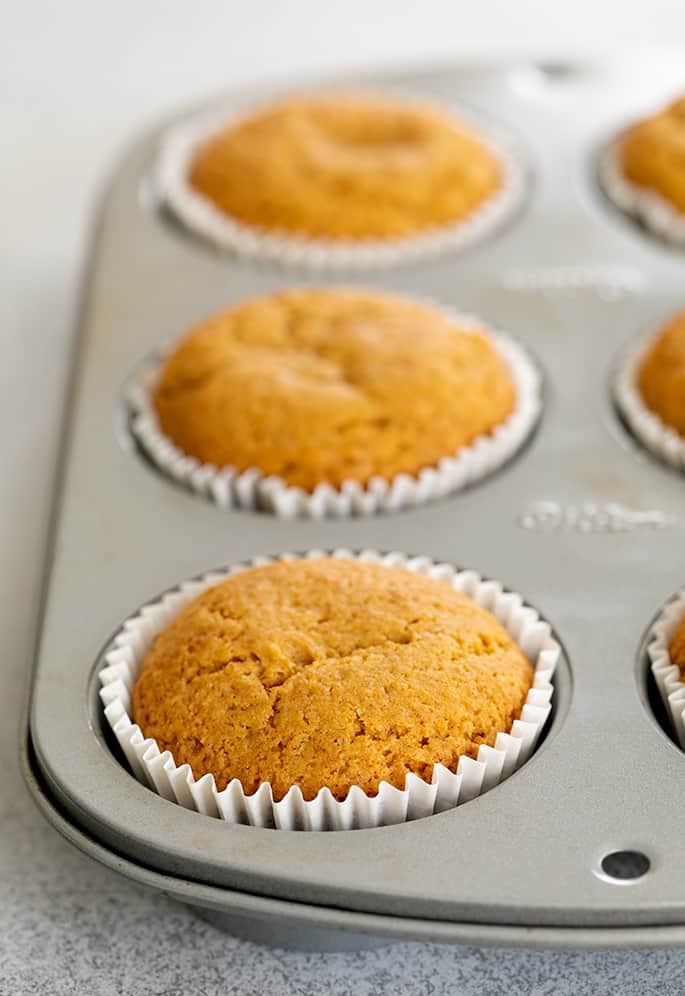 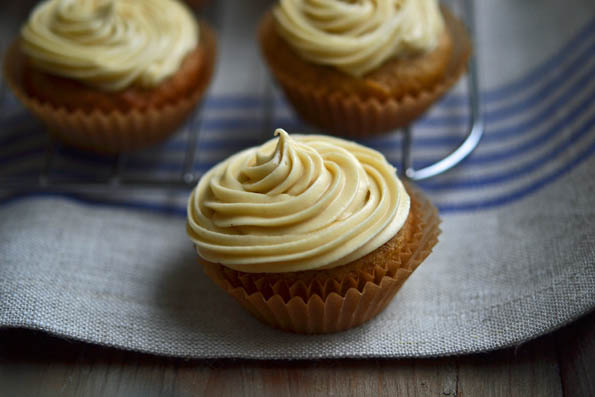 Part of me can’t believe that my kids feel deprived that they don’t have those prepackaged mini muffins in their lunchboxes. I mean, can you even begin to imagine the embarrassment of baked riches in their lives? But most of me totally gets it. They’re kids.

Soft and moist, 2-bite mini pumpkin butter cupcakes with just a dollop of cream cheese molasses frosting. If you want to make these full-sized in a standard 12-cup muffin tin, just bake them for about 10 minutes longer, still at 325°F. 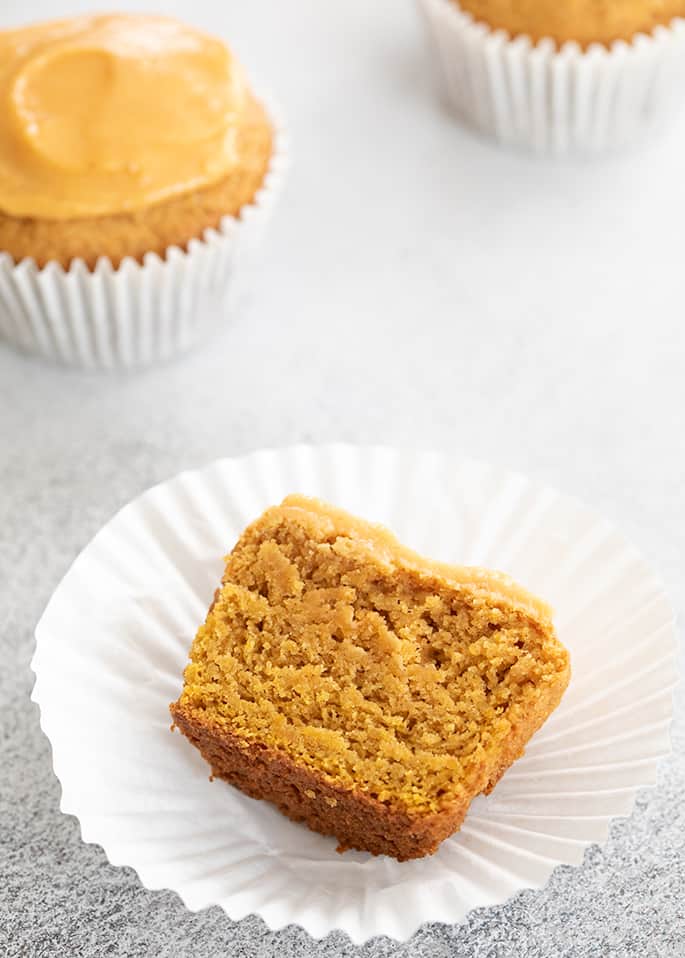 If you can’t have dairy, I recommend you use the pumpkin glaze rather than the frosting, since there is no nondairy cream cheese that tastes like actual cream cheese. At least that’s been my experience.

In place of the butter in the cupcakes, I recommend trying vegan butter like Miyoko’s Kitchen or Melt brand. I don’t recommend using any oil that is liquid at room temperature, but you can try using virgin coconut oil, softened.

There are two eggs in this recipe. You should be able to replace each of them with a “chia egg.”

For each, place 1 tablespoon ground white chia seeds + 1 heaping tablespoon lukewarm water in a small bowl. Mix, and allow to gel before using in the recipe. 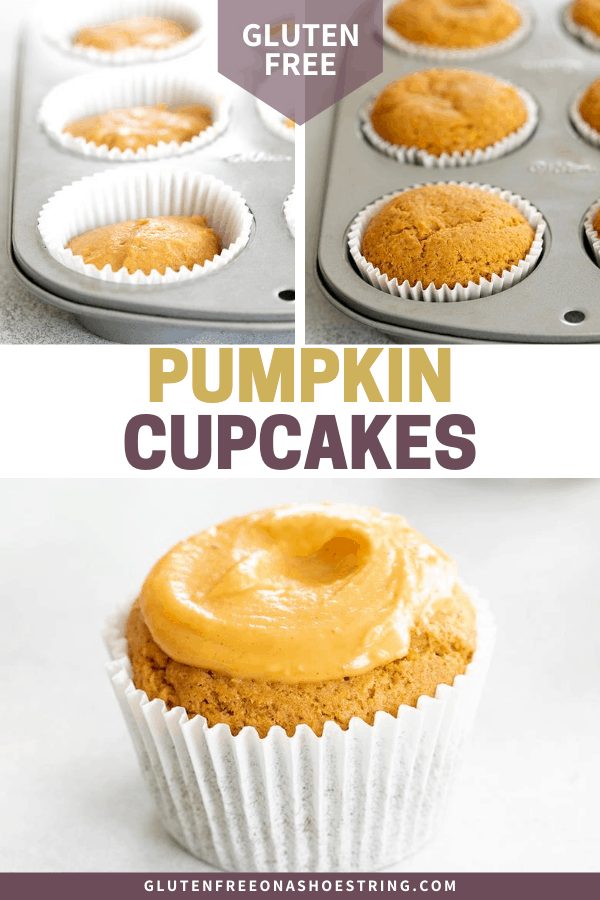 Ease into the baking season with gluten free pumpkin carrot cupcakes, packed with tons of shredded carrots, a cup of pumpkin puree, and plenty of warm spices. 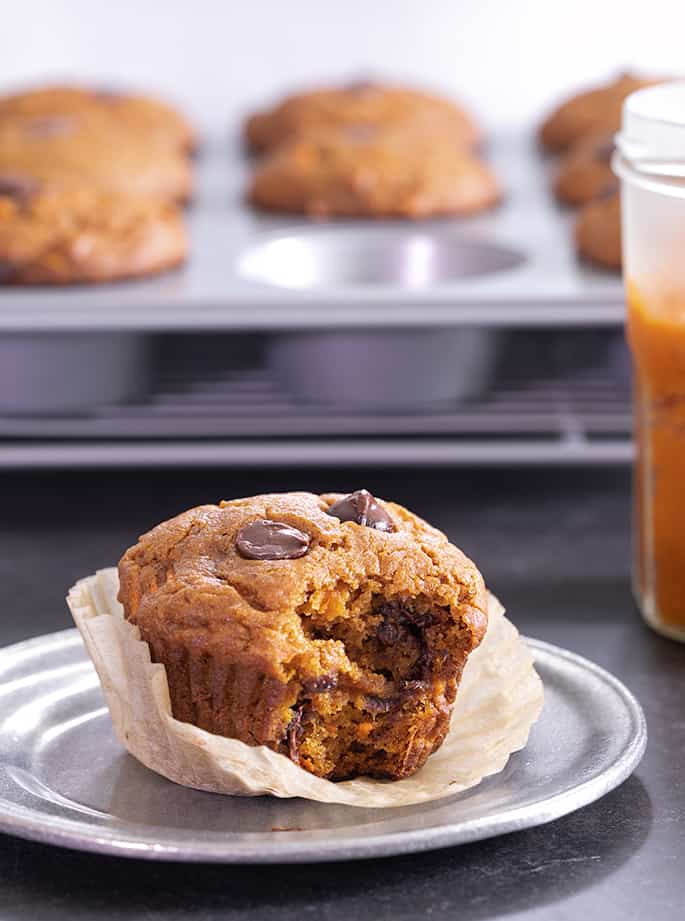 When the mums are for sale at the grocery store, you know fall is actually around the corner. You certainly can’t go by the wax pumpkins at the hobby store or the Halloween candy for sale. Those can come in the middle of summer. But the mums are the real deal. ?

I’ve been seeing mums for weeks now, so I figure I have the green light to start pushing the pumpkin baking. Besides, soon enough you’ll start hearing that there’s a canned pumpkin shortage coming. Don’t they seem to say that nearly every single year?

These might be the moistest cupcakes I’ve ever made. There’s something about the combination of pumpkin puree, shredded carrots, and oil that just makes for a super tender and moist cake. It’s the sort of cake where the crumbs are so moist they’ll stick to the tines of a fork. 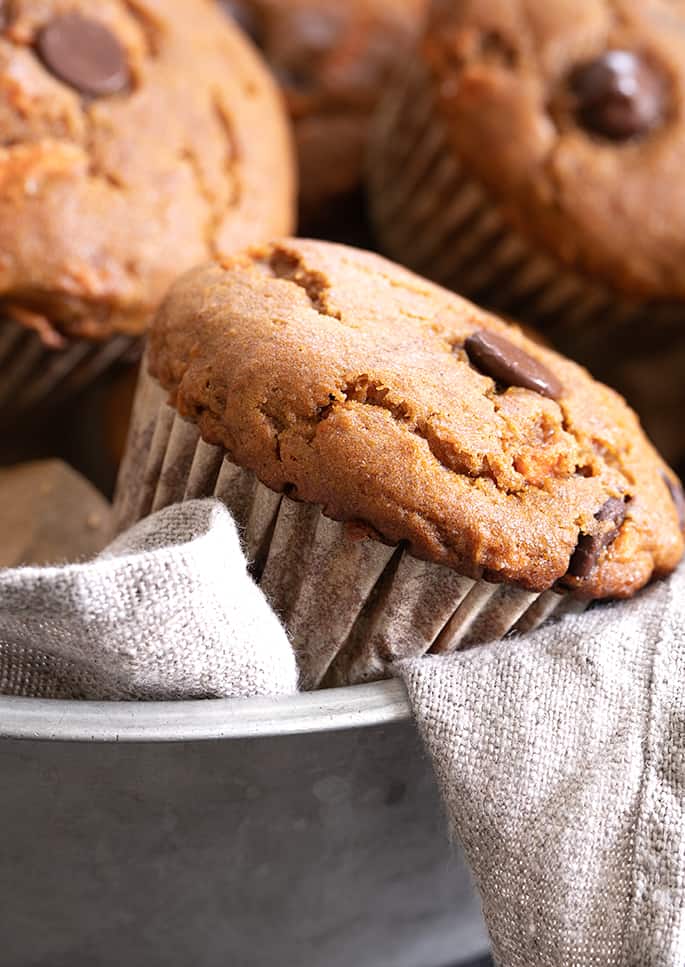 Are these pumpkin carrot cupcakes … healthy?

I first started making these cupcakes back in 2011. It’s so long ago that my children don’t even remember them.

My oldest asked if they were cupcakes or muffins, which really means she’s asking if she can have them for breakfast. They really are cupcakes, since the batter is relatively thick but the texture is so tender and cake-like.

I’m more likely to call something a muffin if it’s a bit drier and denser. A good muffin is never actually dry, but the crumb is typically a bit drier than a cupcake. A cupcake is, well, a mini cake.

These cupcakes are, in fact, made with 2 cups shredded carrots. Then again, our gluten free carrot cake has plenty of carrots, too, and no one would call that health food.

The batter also has half a can of pure pumpkin puree, which has a single ingredient: pumpkin. There is no denying that these cupcakes are filled with beta-carotene.

But their health benefits, if any, are purely accidental. They’re not a multivitamin, and you wouldn’t really serve them for breakfast (except for a very special occasion?). 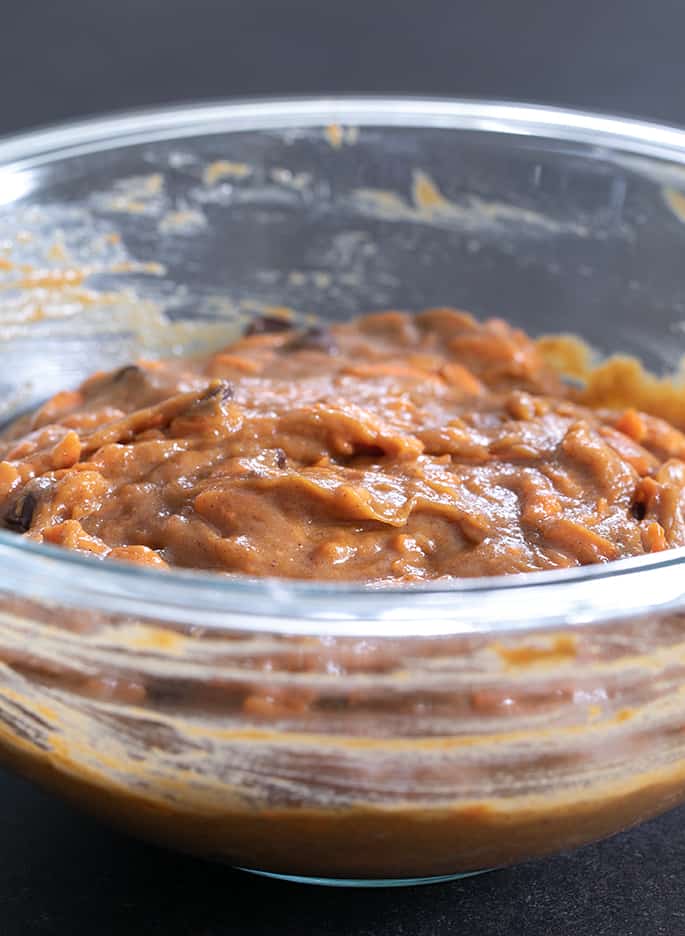 Like most of my cake recipes, these gluten free pumpkin carrot cupcakes are made in one bowl. One notable exception is the very best gluten free vanilla cake recipe, which calls for sifting the flour.

That vanilla cake is a true exception and demands that the butter is beaten with the sugar. The flour must be sifted into the wet ingredients. This cake can be made entirely in one bowl, easily. 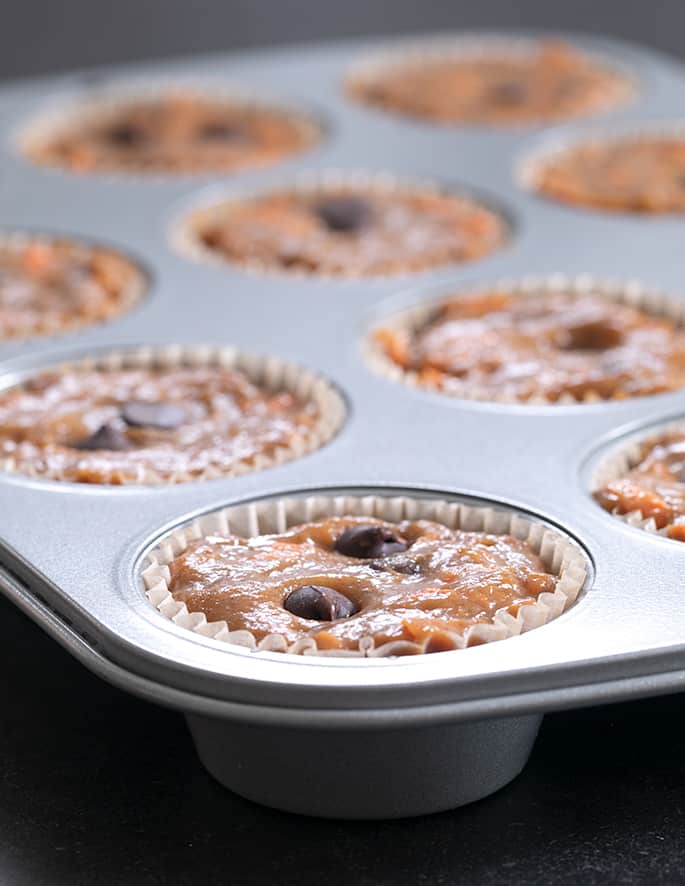 Simply whisk together the dry ingredients (flour, baking soda, salt, spices, granulated sugar, brown sugar), and break up any lumps in the brown sugar. Most of the sugar in this recipe is brown sugar, and it does have a tendency to clump.

Be sure to break up all of those clumps or you’ll have pockets of undissolved sugar in your cupcakes. They’ll bake differently and won’t really become part of the cupcake. 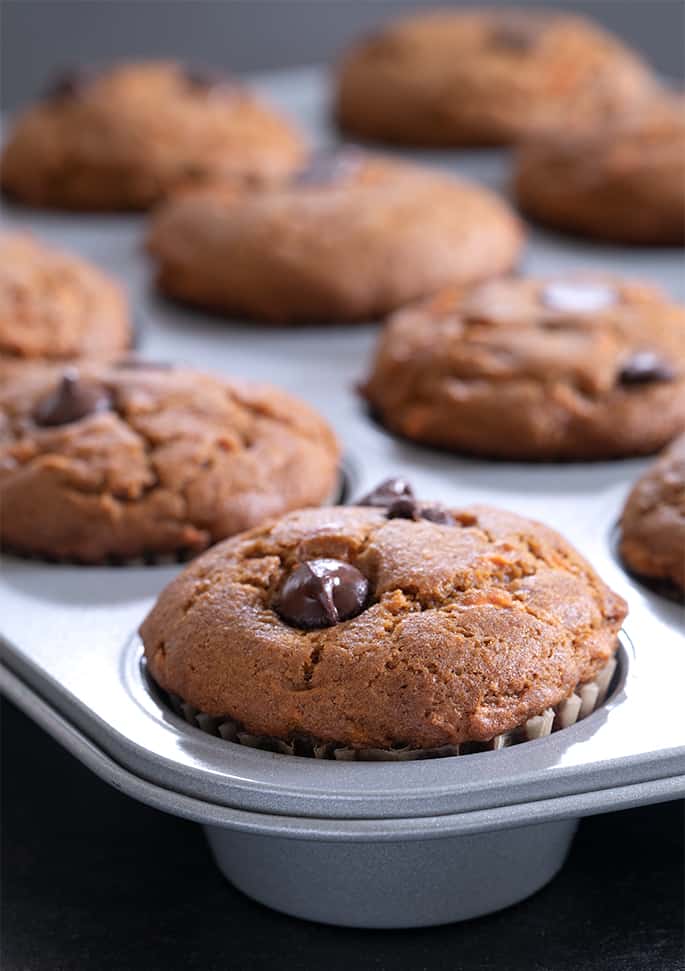 Next, use a large spoon to create a deep well in the center of the dry ingredients. This will allow the wet ingredients to reach the bottom of the bowl of dry ingredients right away. It makes mixing the batter much easier.

Gluten free cupcakes might not have wheat gluten in them, but tender gluten free baked goods still shouldn’t be overmixed. That’s part of the reason to use melted butter and oil, which allows for faster mixing of the cupcake batter.

Be sure to fill each well of the muffin tin fully with batter. The size of the wells of any muffin tin varies, so if the wells of your muffin tin aren’t quite as large as mine, you’ll end up with some extra batter. Just use it to bake an extra cupcake or two in another pan.

I prefer to line my muffin tins with greaseproof liners (they don’t stick to the baked goods like typical grocery store liners tend to). I find that the batter rises straight up more evenly. But of course you can bake these cupcakes in a greased muffin tin. 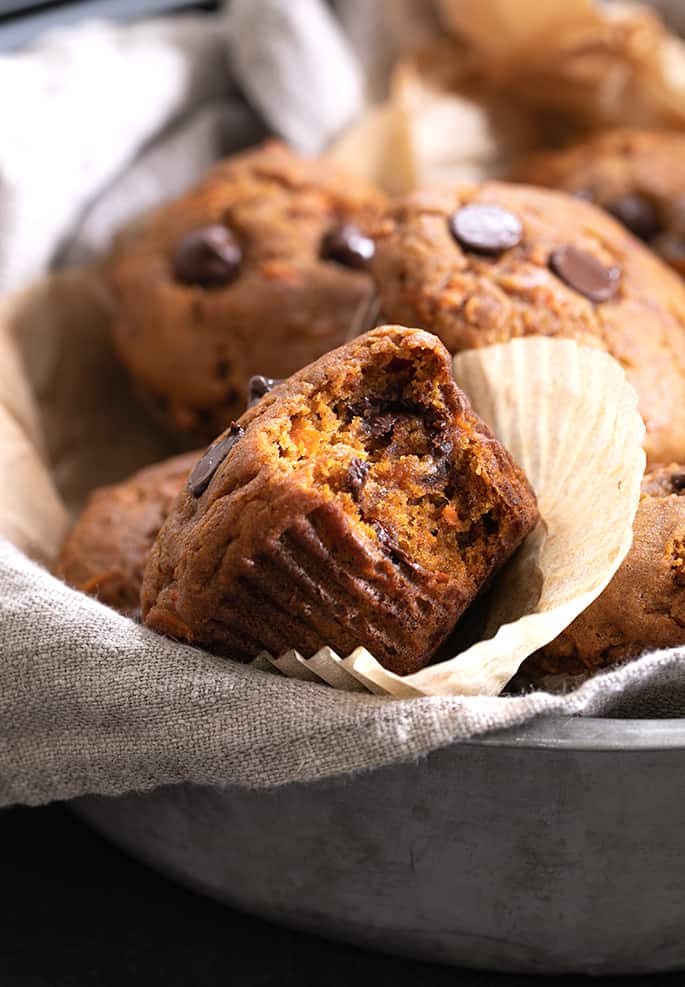 Recipe testing isn’t for the faint-of-heart (wasting ingredients is no joke!), and I hate to ask you to do any of it at all. But if I haven’t tried a recipe with certain substitutions, I’m afraid an educated guess is all I can offer. Here goes:

Dairy-free: These cupcakes are really just 1 tablespoon of butter away from being naturally dairy-free. The butter does give the cupcakes some richness, but it’s easily replaced by one extra tablespoon of neutral oil. Just be sure you use dairy-free chocolate chips, and you’re all set!

Egg-free: I’ve never tried these cupcakes with an egg substitute, but I’m tempted to recommend that you try making it with 1 “chia egg” (1 tablespoon ground white chia seeds + 1 tablespoon lukewarm water, mixed and allowed to gel) and replacing the second egg with another ounce of pumpkin puree.

I’m afraid I’m just shooting in the dark with that suggestion, though. If you do try it, I’d also try adding 1/4 teaspoon of baking powder to the dry ingredients.

Sugars: The brown sugar in this recipe really gives the cupcakes a richness and depth of flavor that you can’t get from just granulated sugar alone. You can’t replace a granulated sweetener with a liquid one like maple syrup or honey, but you should be able to replace both of the sugars with coconut palm sugar.

Palm sugar is a flavorful, rich unrefined sugar, and can be a great, somewhat healthier alternative to brown sugar. But it doesn’t dissolve quite as well in baking as refined sugars, so I recommend grinding it in a blender or food processor before adding it to the batter. That will help it dissolve.

If you’d like to try an alternative sweetener like monkfruit, I’d recommend trying Swerve brand brown sugar alternative or Lankato monkfruit. Both tend to be drying, though, so you might want to add a bit more pumpkin puree. I’m afraid you’ll have to experiment!

Chocolate chips: When I first started making this recipe years ago, I used to make it with equal amounts white chocolate chips and raisins. But I just love the combination of pumpkin and chocolate so much that I really prefer semi-sweet chocolate chips here now.

If you’d like to replace the chips, though, you can use any small mix-in that holds its shape and doesn’t add moisture. Small bits of dried fruit like raisins are always a solid choice. Chopped nuts would also work really well. 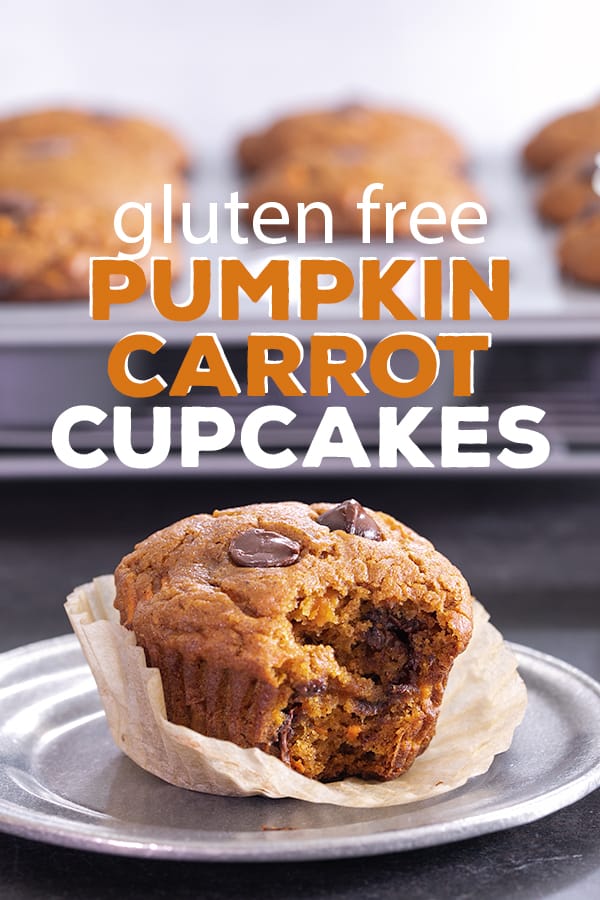 These iced gluten free pumpkin scones taste like pumpkin pie in a neat little handheld pastry. Made with my favorite pumpkin butter, and spiced just right! 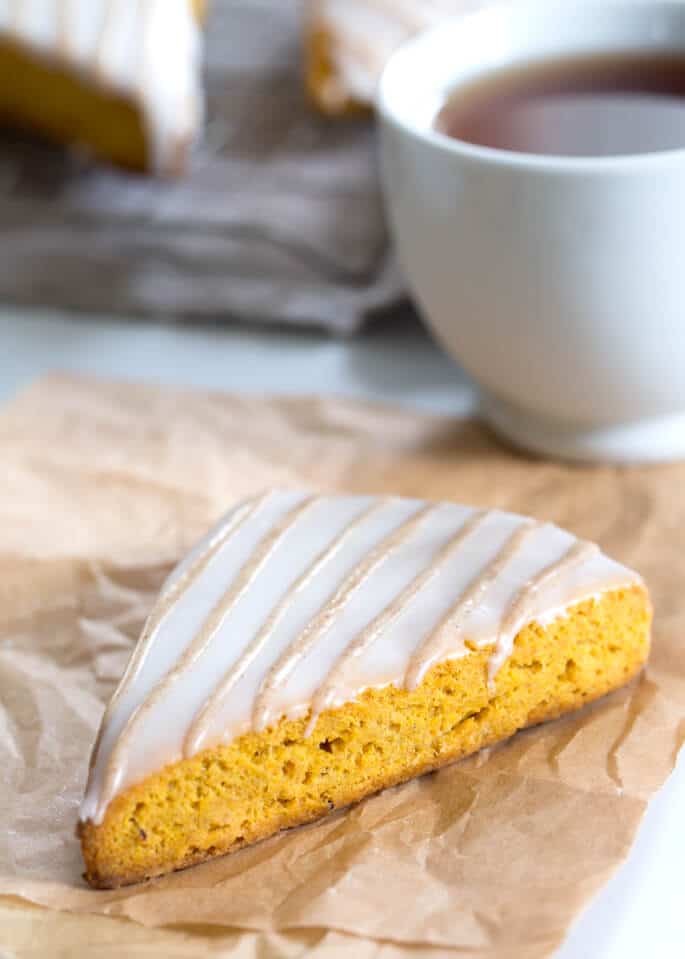 I make no secret of how much I love fall: the clothes (everyone looks lovely in a turtle neck!), the activities (apple picking! visits to the pumpkin patch!), and the baking, oh the baking. When I first had to dive head first into gluten free baking, way, way back in 2004, it was early fall.

Since that was back in the dark ages of gluten free baking, I tried and failed (miserably) to recreate all my favorite baking recipes. It was a real heartbreak. I wanted my gluten free son to know all the wonders of the season. But now, more than a decade later, I am fully convinced of what I promise you all the time: if they can make it with gluten, we can make it without. 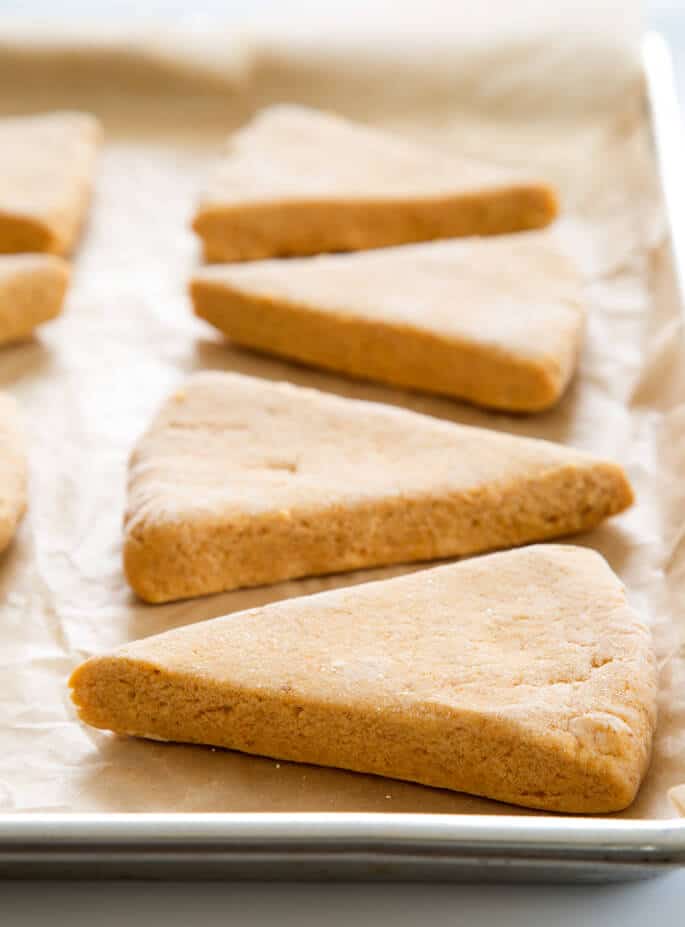 One of the biggest differences between gluten free baking and conventional baking is moisture balance. Gluten free flour blends tend to absorb more moisture than conventional flours. But it’s a balance, you see. Baking with straight-up pumpkin puree adds too much moisture to baked goods, so I generally do not bake with it (unless we’re talking pumpkin pie filling). 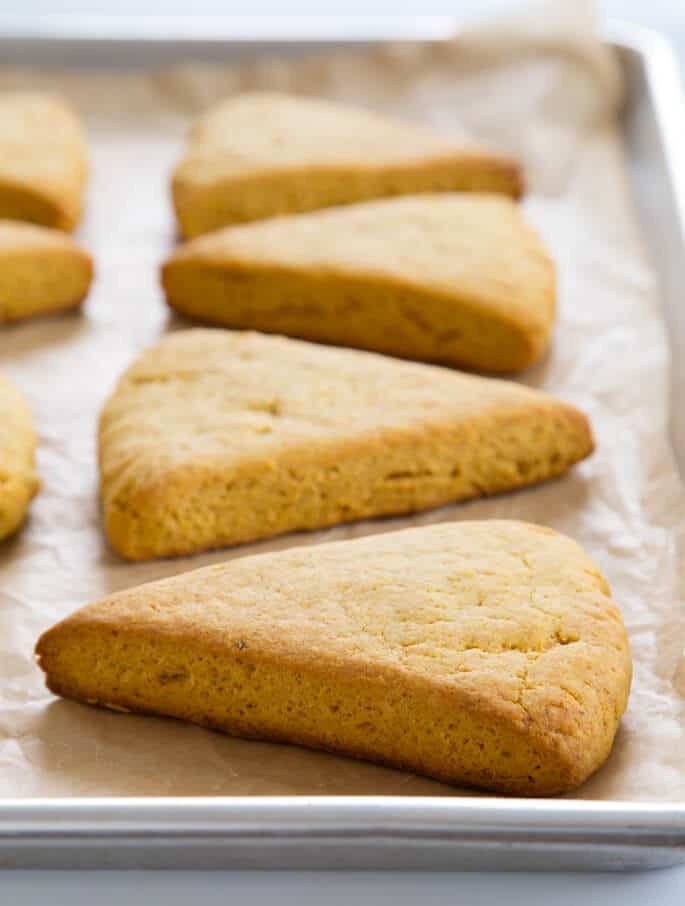 I do nearly all of my pumpkin-baking with pumpkin butter, which is just a thickly concentrated mixture of pumpkin puree, maple syrup, spices and a touch of apple juice (since there’s no pumpkin juice!). I make a huge batch of my easy homemade pumpkin butter every so often, and it keeps in the refrigerator for weeks. But you can certainly buy it off the shelf. Trader Joe’s has it own brand, and it’s well-priced and quite tasty. 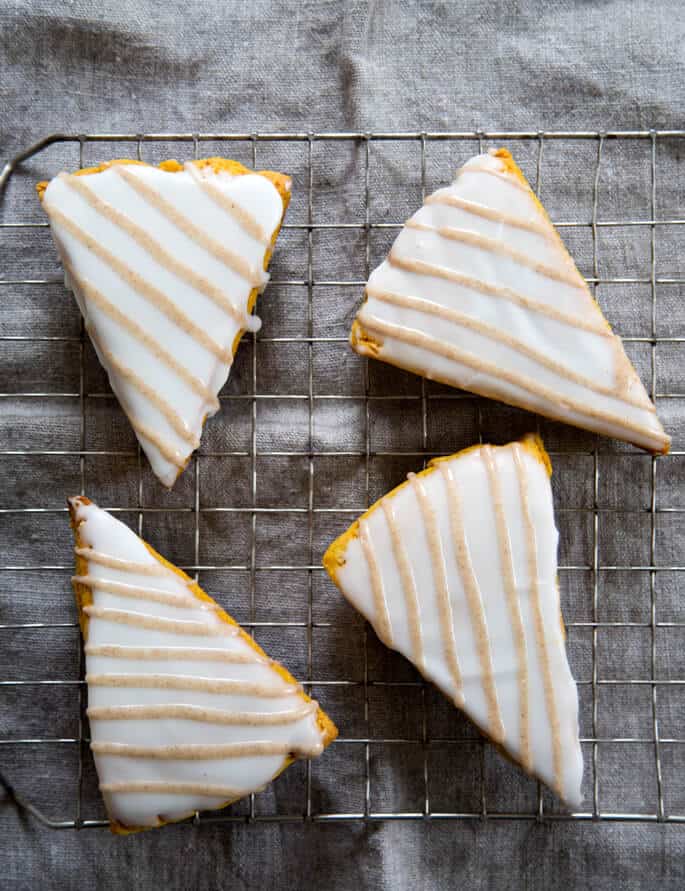 You can even make the dough for these gluten free pumpkin scones as far as a week ahead of time and freeze it on a baking sheet. Bake it right from frozen, and mix up the icing while the scones cool.

These lightly sweet lightly iced scones aren’t overwhelming in spice, although of course you could add more pumpkin pie spice if you just can’t get enough of the stuff. Baking with pumpkin butter means that we get a pastry-style texture in these gluten free pumpkin scones—plus deep pumpkin flavor and aroma. It will remind you of the very best parts of the Thanksgiving season. Long live fall!