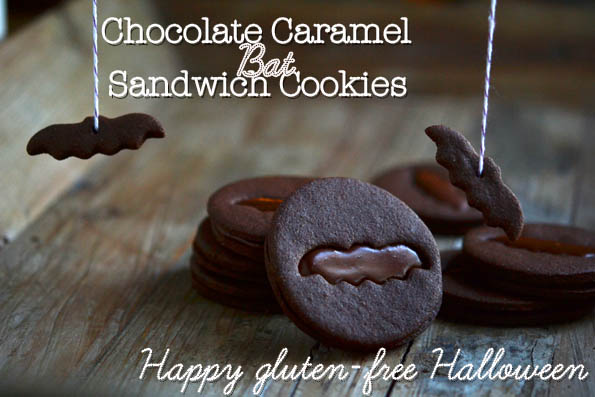 It's Day 3 of our I've-Never-Done-This-Before Support Group, and I didn't want to show up empty-handed. So I made Bat Sandwich Cookies, even though the truth is that bats scare the living daylights out of me.

When I was in college I lived in a really really old house. I had lots of crazy roommates (and not the good kind of party-hardy-crazy; the white coat kind), one of whom was a bat (or two? who can tell for sure) living in the basement. I'm reasonably sure that the landlord, to whom I paid $190 a month for the pleasure of living with this bunch of lunatics, cared not at all. Like, if it was her job not to care, she would have gotten an immediate promotion to, like, the tallest midget or something. The only reason any of this mattered (just don't go in the basement, dummy!) is because … the laundry was in the basement. And dirty undies were apparently scarier than bats. Which is saying something. So my one non-crazy roommate and I bought ourselves some extra undies. And 6 times every 2 weeks (2 loads of laundry, 3 bat visits per load – try to keep up), we put on baseball hats, and sprinted downstairs and back up, hearts racing. The bat(s) would do laps just below the impossibly low basement ceiling as we cleaned our clothes.

Not once did we consider going to a laundromat. We might not have been at our absolute smartest and most rational. 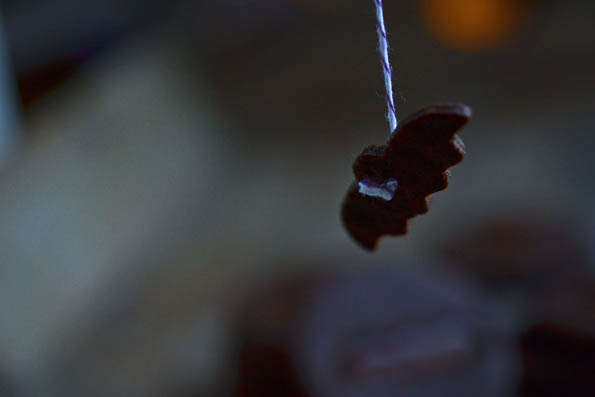 These bats are not bad-scary, though. They're good scary, and the oldest of my 3 kids cannot get enough scary in her life. She also has a need for speed. I'm probably going to be in big trouble with that one. For now, she's only 10 so I can still distract her with a good cookie. Thank goodness for that.

Now it's not like my kids are eating all of these Halloween treats I've been making. Especially since they're about to be begging for candy door-to-door in just one week's time. But since there is always the promise of a Halloween party in my gluten-free son's third grade class, I need something more fabulous than the usual school-party fare to send in to school for him so he feels pride instead of shame.

And these are super easy to make, to boot. 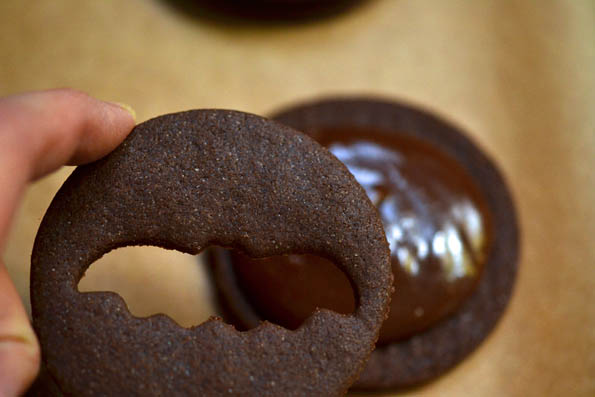 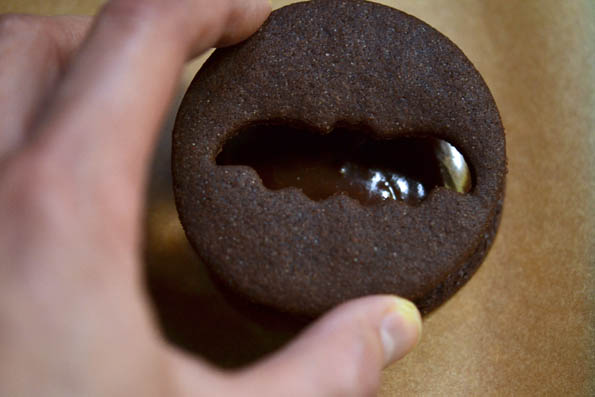 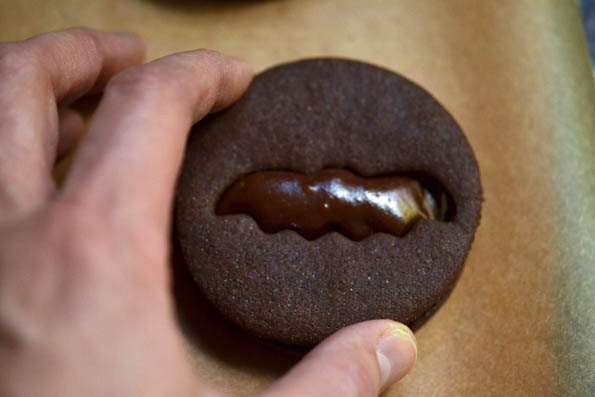 Semi-Pro Tip: I had an actual bat cookie cutter, but you could improvise if you don't have one of those lying around (I think the ones I have are made by Wilton, and they tend to be pretty easy to find this time of year). Try the Martha Stewart trick of using a small triangular cookie cutter for the center, and two inverted half-moon shapes for the wings. If you have those little aspic cutters, they'll do the trick. 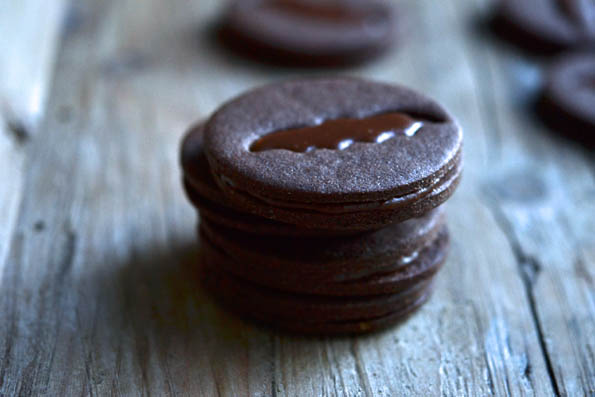 And bake those bat cutouts, too, instead of gathering and rerolling them as scraps. Poke holes in the centers of the cutouts, bake them, and then thread a string through the holes. Dangle them from a chandelier or floor lamp at different heights. Scary! But in a good way. Just ask my daughter (not my college self – she's a weenie). 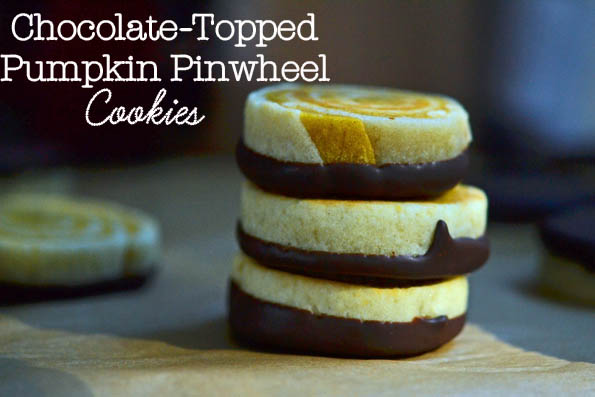 Are you a Morning Person? I've become one. I think we can be irritating to others, we Morning People. Chatty, renewed, refreshed. Excited! Annoying.

I used to be a Nothing Person. I was never a night owl like my husband, and never really seemed like much of a morning person either. What did that make me? Sad. It made me sad. I used to know someone who insisted that she was not an afternoon person. She was no good in the afternoons, she said. What the heck does that mean anyway? I don't even much like that person, who used to insist that, so I can't even ask her. I just have to go on wondering. Anyway, she used to work for me, and I think she was just trying to get out of having too much asked of her in any given day.

I wish I were the type of person who could live with telling someone I worked for, Hey, I would totally do that project for you, except it's going to require some afternoon work, and I'm just really not an Afternoon Person. Like that's a thing. 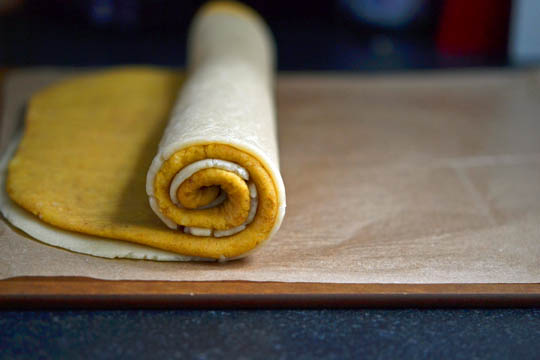 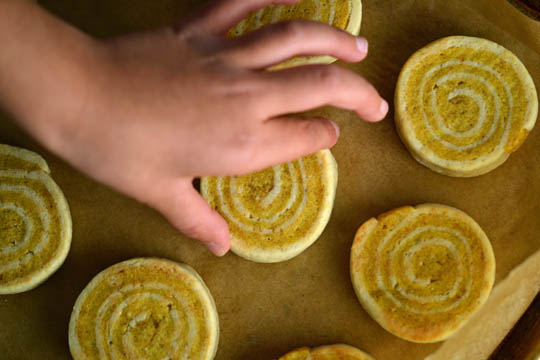 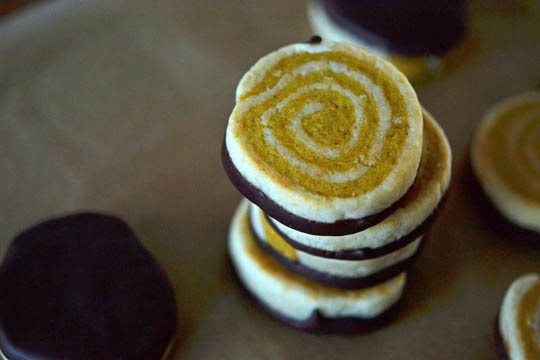 I was all set to add some orange food coloring to the vanilla layer of these Gluten-Free Pinwheel Cookies, and serve them as a Halloween treat. They're really light and buttery, and I so enjoy them and their vanilla-chocolate charms. Then I got scared of the no-food-coloring-people again. They're like body-snatchers, those people. That's when I realized something (probably in the Morning).

Pumpkin is orange. That's even the wholereason we have orange things on Halloween. That's how it went. Exactly like that.

These pinwheel cookies are lightly sweet and fragrant with pumpkin pie spice, perfect for the season. Where the traditional chocolate-and-vanilla GF pinwheel cookies are crumbly and melt-in-your-mouth-buttery, these cookies are thick and soft. And the rich hard chocolate tops (or bottoms, depending) are the perfect complement to the chewy soft cookies below (or above, depending). And, not for nothing, but the spirals make a rather impressive presentation. Don't you think?