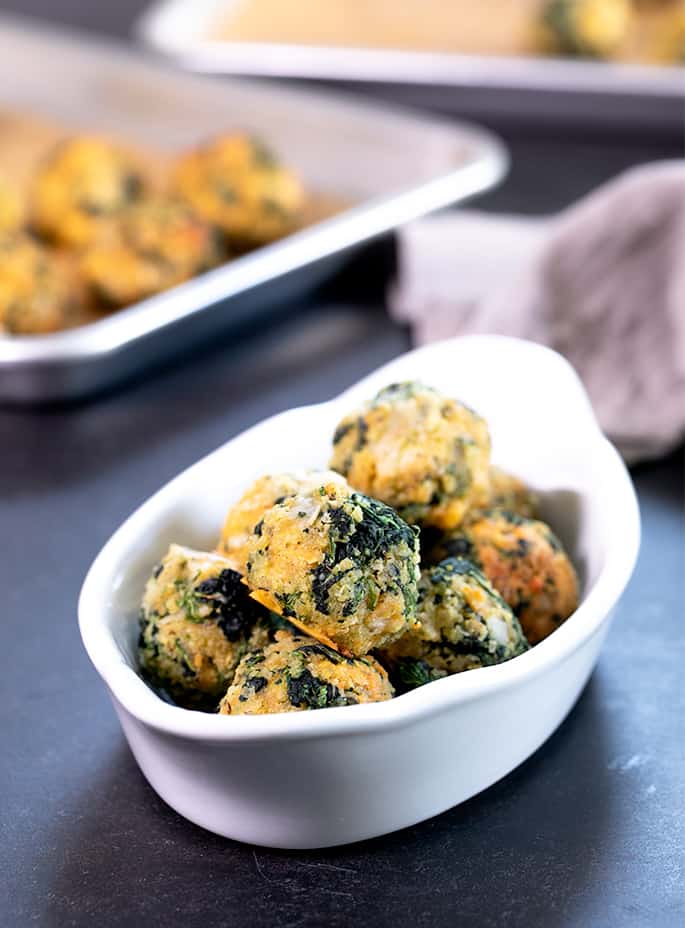 For spinach lovers and spinach haters

These spinach bites are for all the non-spinach eaters out there. I truly will eat (nearly) anything, so I’ll eat spinach no problem—especially if you serve it to me and I didn’t have to lift a finger.

But something strange happens to cooked spinach and my tongue and I’m not entirely sure what it is. I just know I’m happy to avoid it if possible, and it doesn’t happen when I pop one of these spinach balls in my mouth.

Even my youngest child, who loves vegetables so much that she literally begs ??me to make her brussels sprouts and kale, is a big ‘no’ on spinach. That is, unless it’s in one of 3 forms: creamed spinach (put cream cheese on anything and anyone will eat it), spinach dip, and these spinach balls.

There’s something about the marriage of melted butter, sharp cheddar cheese, and rich, flavorful Parmigiano-Reggiano cheese that just makes everything alright. The spinach isn’t hidden, of course, so this isn’t a way to sneak your kid vegetables (I think that’s kind of silly anyway but to each his own). 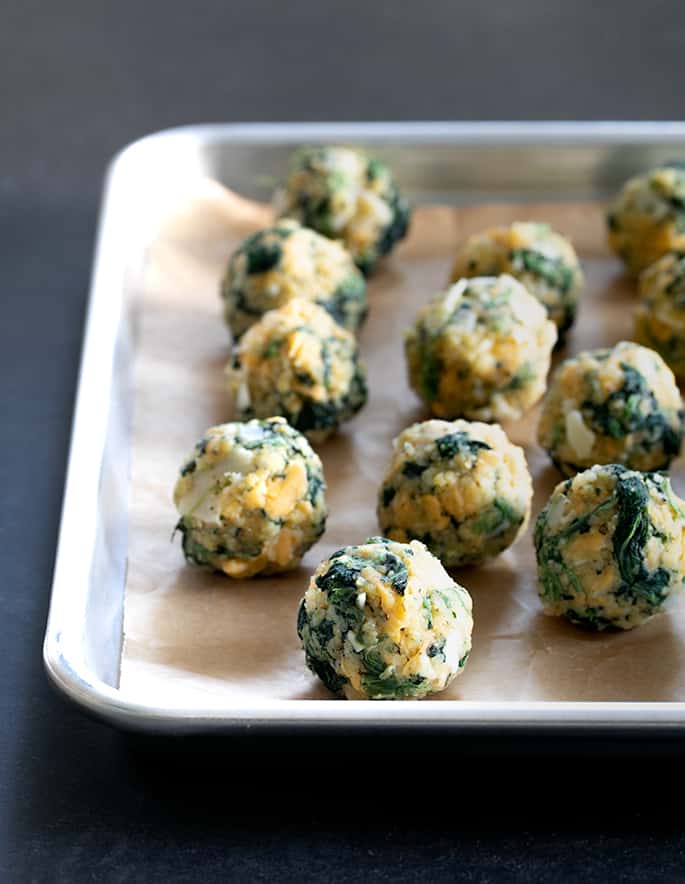 How to drain the liquid from your vegetables

If you’ve made nearly any of my zucchini recipes, you know how important it is to drain the liquid out of your vegetables when you’re baking with them. This recipe for spinach balls is super quick and easy. The how-to video I created doesn’t even clear 45 seconds.

When you’re baking with high-moisture vegetables like zucchini, cauliflower, and spinach, you’ll need to spend a few minutes removing the liquid. The easiest way that I’ve found to do that is by placing the chopped and thawed spinach (or grated cauliflower or zucchini) into a nut milk bag (affiliate link—feel free to shop around). 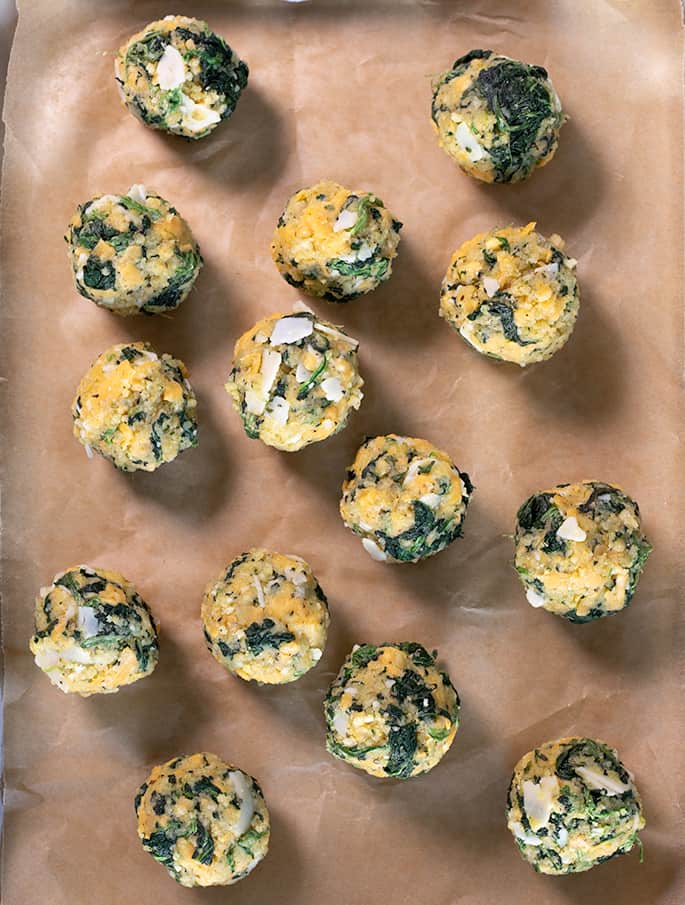 Can you freeze spinach balls?

These are a great make-ahead appetizer if frozen once formed and before baking. Just freeze the balls separated on the baking sheet, and, once frozen, place in a freezer safe ziptop bag and store until you’re nearly ready to serve them.

There’s no need to defrost these spinach balls before baking. Just bake them right from frozen. They may need a few extra minutes in the oven, but you’ll be able to tell. You simply can’t ruin this appetizer unless you outright burn them, which takes quite a while.

These are super cheesy, but not in the ooey gooey mozzarella sort of way. There’s no cheese pull photograph here. Spinach balls are a firm appetizer, and they’re best when made and eaten soon after. If you’re going to freeze them, freeze them raw. 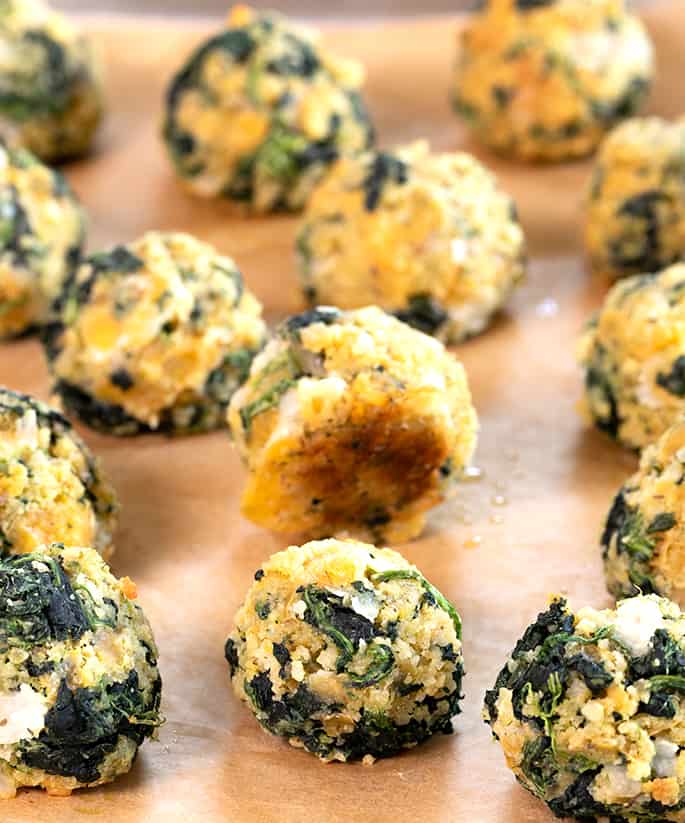 Much of my photography from way-back-when (I started this blog in 2009, if you can believe it) was simply atrocious. Every once in a while though I stumble upon a picture that I don’t hate. And makes me feel nostalgic in a good way.

Here’s one of those photos. Clearly, I got lucky with my point-and-shoot camera. Today, I’d take a better photo with my phone, I’m sure. Just a quick reminder that we all have to start somewhere. 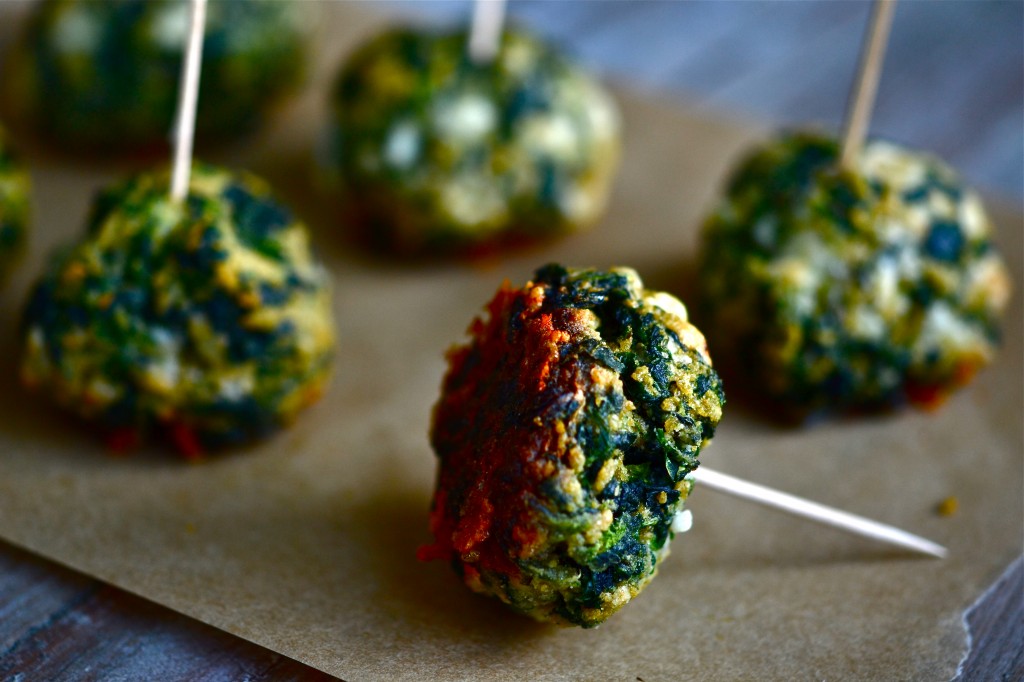 Dairy-free: If you’re dairy-free, you can make these spinach balls, but they simply won’t be the same. The melted butter can be replaced with melted virgin coconut oil (use the triple-filtered kind if you can, so there’s no coconut taste).

The cheeses can be replaced with dairy-free cheese. My favorite brands of dairy-free cheese are Violife (which can be hard to find) and Daiya (which is quite widely available). I would also replace about 1/8 of the bread crumbs called for in the recipe with nutritional yeast, as that will help add a cheesy flavor.

Egg-free: This is a very tough one, as there are 3 eggs in this recipe that makes only about 2 dozen spinach balls. You can try replacing each of the eggs with a “chia egg” (1 tablespoon ground white chia seeds mixed with 1 tablespoon lukewarm water), but I’m not sure it will work.

Bread crumbs: When I first started making this recipe way back in 2011, I was just as likely to use crushed gluten free cereal as I was coarse bread crumbs. I was generally unwilling to “waste” expensive gluten free bread on making my own GF bread crumbs, and it was almost impossible to find them for sale in a regular grocery store.

We certainly have come a long way since then. You can easily make homemade gluten free bread crumbs or use a store-bought variety (I really like Ian’s brand, but my local grocery store even has their own).

You can still use crushed gluten free cereal, though. I recommend using something simple like unsweetened GF corn flakes since you really don’t want any sugar in these savory, cheesy bites.

Tapioca starch: Tapioca starch can be replaced with cornstarch or arrowroot. An all purpose gluten free flour will work here, too, since there’s such a small amount. 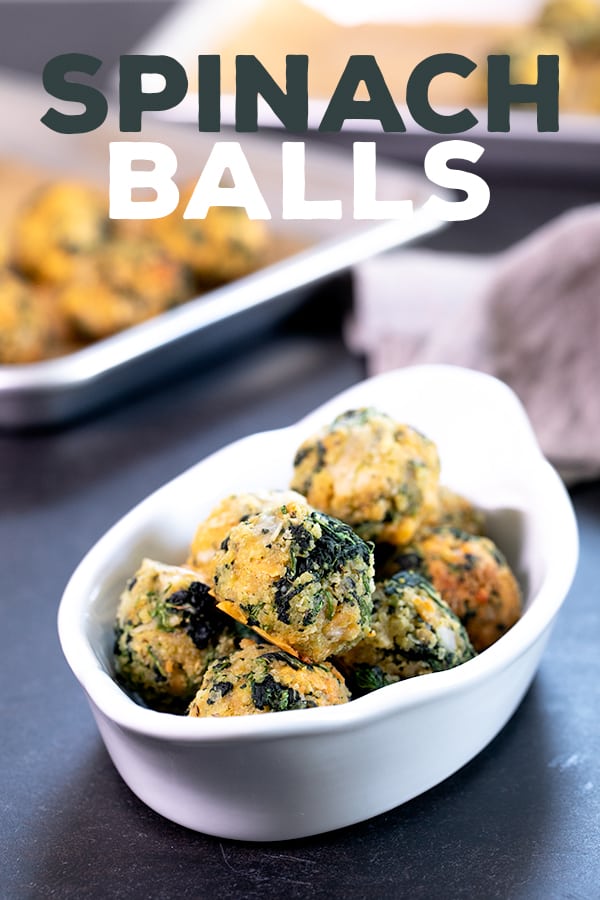 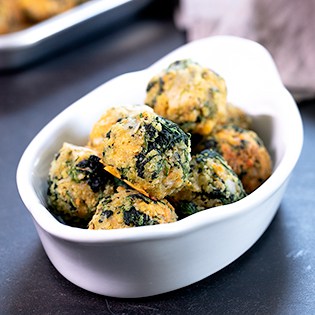 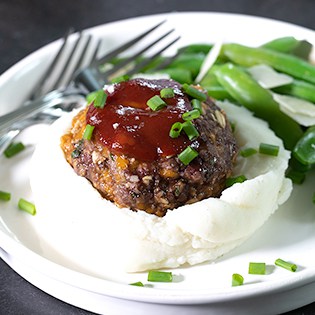 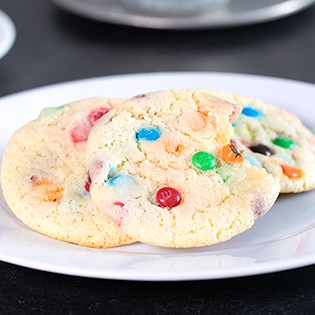 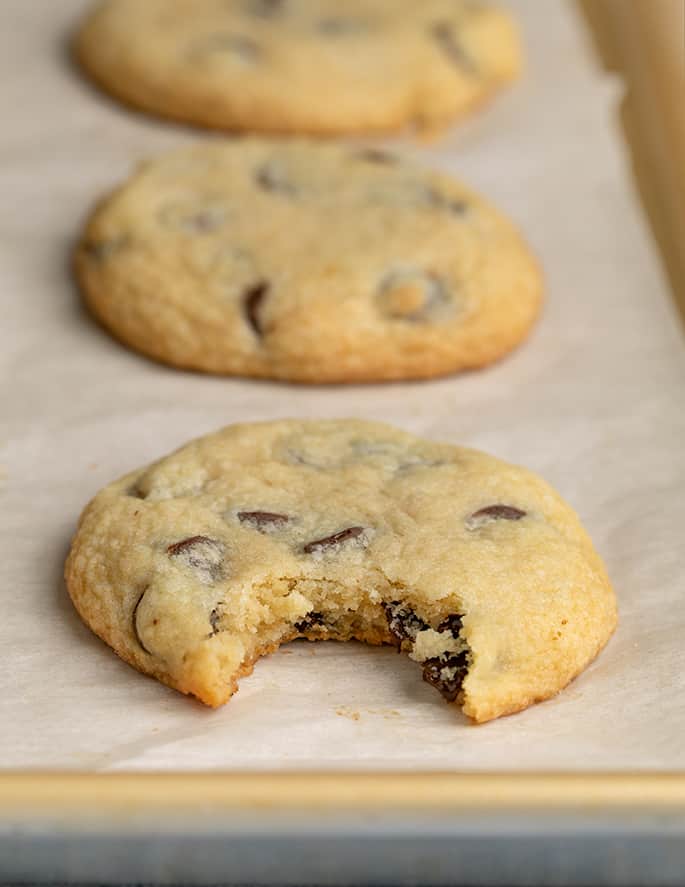