I never had whoopie pies growing up. Is that weird? I grew up in New York. I think it's a New England thing. New York is not quite in New England (although I suspect it wants to be). I actually think that the first time I had a whoopie was when I made them myself. I started at the very beginning, with the standard chocolate-pie-with-vanilla-filling, and I was instantly smitten. They aren't cookies, they aren't cake and they definitely aren't pies. What they are is like a cross between a Devil Dog (think a snack cake that sticks to the roof of your mouth – in a good way!) and, I don't know, an Oreo (but not really)? But not really. Help! How would you describe a whoopie pie to someone who hasn't ever had one? Oh, bother. You can mix and match pies and fillings from the collage below. Get creative! And then pick your favorite. I've sure got mine!

[If you've been reading this blog for a while, you know the drill with the clickable collage, but just in case—hover over each photo for the recipe title, then click the picture to open a new window with that post and the entire recipe] 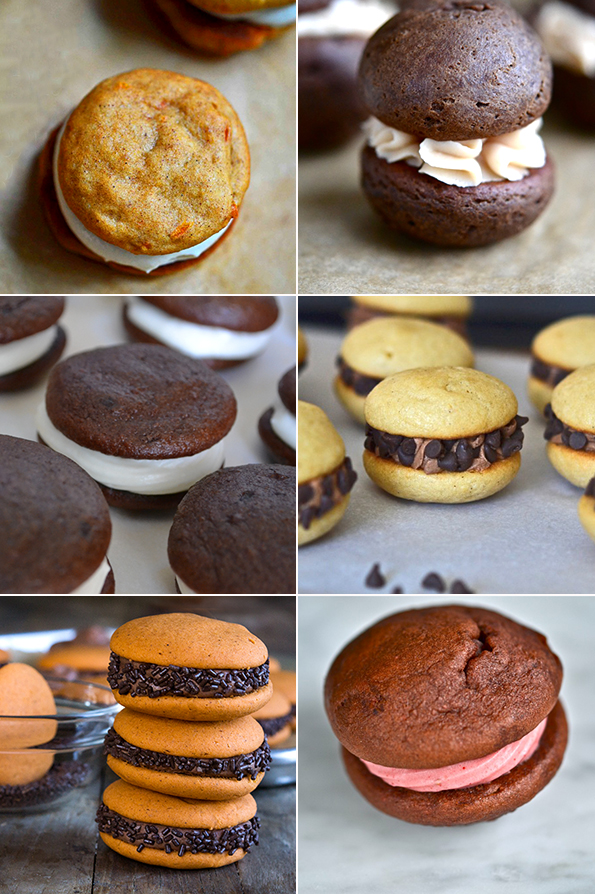 Here's a 10¢ tour of these 6 gluten free whoopie pie recipes, and a few words to say what I love about each of them (remember—all the links are above):

Gluten Free Carrot Cake Whoopie Pies with Cream Cheese Filling: I'm not gonna beat around the bush. These are my favorite whoopie pies. They taste like carrot cake, but the texture is decidedly whoopie-like. The cream cheese filling doesn't hurt, either.

Gluten Free Chocolate Peanut Butter Whoopie Pies with Salted Caramel Filling: Chocolate and peanut butter clearly have a long history together (even though I'm certain you're too young to remember those “you got your chocolate in my peanut butter” Reese's commercials). Add in some salted caramel filling and I dare you to resist.

Gluten Free Chocolate Whoopie Pies: The chocolate whoopie. Standard, but not at all ho-hum. To me, they kind of taste like Devil Dogs in chocolate flavor and tender but almost crumbly texture. Ah, nostalgia.

Gluten Free Vanilla Whoopie Pies with Chocolate Filling: The vanilla whoopie. With vanilla flecks. You don't have to press the filling into miniature chocolate chips, but I'm not exactly sure why you wouldn't. I'm sure you have your reasons.

Gluten Free Pumpkin Whoopie Pies with Chocolate Filling: I made these for SheKnows, since I do that a couple times a month. I probably told you about them on Facebook, but I wanted to be sure you didn't miss them. Pumpkin butter is the secret to deep pumpkin flavor that still has that texture that makes you say “whoopie!”

Gluten Free Red Velvet Whoopie Pie with Strawberry Cream Cheese Filling: Freeze-dried strawberries bring the cream cheese filling to life, naturally. But the red velvet color of those whoopies? Not quite as natural. No biggie for me. If it's a problem for you, just leave out the color!

P.S. Don't forget Gluten-Free on a Shoestring Bakes Bread! Remember that my publisher says Amazon will ship it the week of Thanksgiving if you pre-order—no matter what Amazon is saying “officially.” So pre-order today!