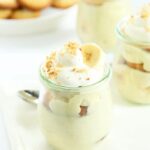 About bananas in the pudding.
If you prefer your banana pudding without banana puree in the pudding itself, you will only need 3 ripe bananas, not 5.
Eliminate the bananas from the blender stage of the recipe (step 1 below), increase the sugar to 3/4 cup (150 g) and add 2 tablespoons (28 g) of chopped unsalted butter to the pudding right after you remove it from the heat in step 2 below. First published on the blog in 2011. Recipe and photos updated in 2016.
2022 GLUTEN FREE ON A SHOESTRING