How I Went From Food Blog To Cookbook ... & Back Again 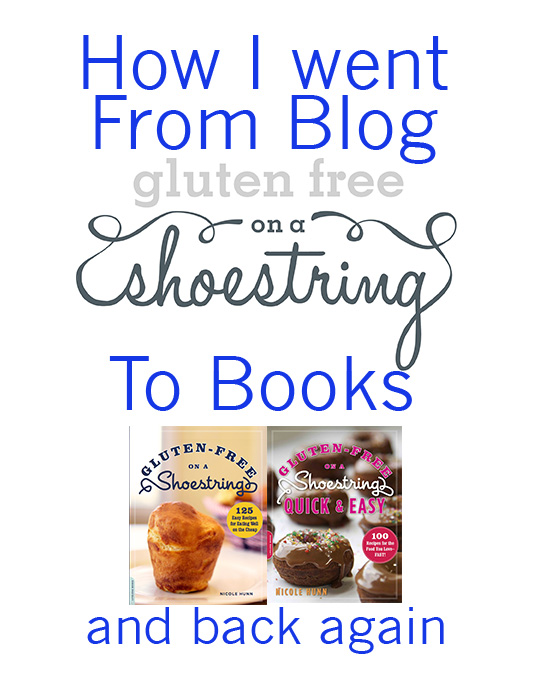 I’m Nicole, and I write this blog. I started writing a blog and it turned into a book. Well, a few books. Here’s where I really level with you about how I went from a food blog to writing cookbooks, and back again, no holds barred. I’ll tell you what I wish someone had told me, way back in March 2009 when I started “Gluten-Free on a Shoestring” on a free wordpress.com website, and pretty quickly got a big break that led to the publication of my first cookbook of the same name. If you want to skip to the lessons learned from blog to book, scroll right to the bottom.

HOW THE BLOG STARTED.

Back then, I was in bad shape.* I had just been laid off from my job as a practicing lawyer in the early days of The Great Recession (go to work on a Tuesday morning, back out on the street, cardboard box in hand on a Tuesday afternoon). I had my 3 kids to raise but I’m a better mother when I’m working part time. I had been cooking and baking gluten-free since 2004, and had gotten relatively confident doing it. So I started a blog on wordpress.com, where you can start out for free. It wasn’t interesting and it wasn’t pretty, but it was a subject that no one else was talking about:  eating gluten-free, eating well and doing it on the cheap.

SETTING UP A SELF-HOSTED “.COM” BLOG.

I needed some sort of blog header and design, but I had no design skills at all and no money to spend on it. I hired a really nice young kid in Mumbai, India for a song. We communicated entirely by instant message. The designer suggested I buy a self-hosted domain. It’s so cheap to do that, and he said that I would get more traffic that way. I purchased glutenfreeonashoestring.com (and glutenfreeonashoestring.org, just in case), some really inexpensive hosting and kept posting recipes and photos. The recipes were good, but the writing and photos were terrible. I don’t have the design any longer or I would show it to you. If you’re just starting out, it would either make you feel a lot better—or scare you away entirely.

Right around that time, I had also joined the Board of a relatively large and well-established Celiac Disease Support Group, and started telling other Board members about the blog I had started, but it was hard to find a natural way to bring it up. My husband pushed me to tell them, so I choked it out. I published posts 4 or 5 times a week. Again, sound recipes but not at all pretty.

I GOT A BIG BREAK.

Then, in August 2009, I got a big break. The founder of the local support group had received a call from a freelance health reporter who was doing a story for the New York Times about the cost of living with celiac disease. She referred the reporter to me, I answered a bunch of questions and I ended up in the article, both online and in print. My tiny little blog got 20,000 pageviews the day the article went live online. And a literary agent contacted me by email. She thought that she could sell the idea as a cookbook to a particular publishing house. In fact, she already had an editor who was interested.

I GOT A BOOK DEAL.

The deal was done entirely by my fabulous and talented agent. The only smart thing I did was to listen to her. She held my hand as I put together the proposal, line editing it section by section. She said we had to get it done quickly because gluten-free was big and you never know when it will get, well, small. Two weeks later, we had a book proposal. Two weeks after that, we had a deal. I had 6 months to write the manuscript, and it would be published 8 months after that. I hadn’t signed a contract yet, but my 6 month clock started at the time of a handshake deal. At first, I didn’t know that so I sort of sat on my hands. I didn’t even bother to “announce” the cookbook deal on the blog, since I had gone back to just having a few readers after the pageview bonanza from the Times mention.

While I was writing the book, I essentially put the blog on a shelf. I didn’t post more than once a month. My husband kept telling me that I had better keep the blog going so I could “promote” the book once it came out. But I figured, it was a great idea for a book and an important idea, and it was so lacking in the market. I couldn’t develop recipes for both the blog and the book at the same time, could I? Plus, everybody knows that they won’t buy the cow if you give away the milk for free. They said so in 7th grade sex education.

And, anyway, wouldn’t the publisher take care of making sure people bought the book?

No, they wouldn’t. And just because you write a book doesn’t mean that anyone knows or cares about it. BIG mistake to abandon the blog while I wrote the book. I didn’t even go back to regular posting on the blog after I delivered the manuscript to my editor. I had the time. But I thought I’d already written all the basic, cost-conscious gluten-free recipes for the book. What else was there to say?

MY FIRST BOOK CAME OUT.

On the official “publication day” of my first book, I got a “Happy Pub Day” email from my agent. Yay! Happy Pub Day! Let the buying begin, right? No. Not right. My agent looked at my blog. It was seriously lacking. Much of the information was outdated. She isn’t one to mince words, so she called me and she gave it to me straight: Either you get on the ball and start maintaining your blog, or no one is going to buy your book. Who do you think you are?

I FINALLY GOT IT.

I devoted myself to the blog. Well, first I probably felt terribly sorry for myself for a spell. But I did it, because I knew she was right and I had to at least try to make a go of this. Within a couple months of the publication of the first book, my publisher asked for a proposal for a second book. I threw out some of my favorite ideas. The editorial board of the publisher shot them all down. They wanted more ideas. I threw out some more ideas. They picked one: Quick & Easy.

THE LESSONS I LEARNED THE HARD WAY.

LESSON #1. The blog is the most important thing I do. I adore writing cookbooks. The long form really suits me. I have always loved to write (it was always the thing I loved the most about practicing law). But the blog is the mainstay. It is an indispensable laboratory for new ideas: I must write and develop recipes in the intersection between what I want to write about and what you want to read about. The blog is the fastest way for me to see if anyone cares. It is also a way to promote my books. If you don’t buy the books, then I can’t keep writing them. And the connection with you sustains me, and all that I do professionally. I do care if readers are interested in what I’m saying. Otherwise, if I wanted to write just for the pure thrill of it, first it would have to be easy and thrilling all the time. And second, I would just write on a scrap of paper and stick it in a drawer or the recycling bin. But I don’t. I write for me, and for you when I write publicly.

LESSON #2. Giving away the milk is the only way you’re going to know that you want to buy the cow. The lessons of 7th grade health sex ed don’t apply here.

LESSON #3.  Creativity begets creativity. If you want to be creative both today and tomorrow, you have to be willing to leave everything on the table today.

*You can read about that on my About page. And I am not in any way suggesting that I am not ever in bad shape, riddled with insecurity and feeling like a total failure from time to time now. But it was way worse back then, because it was all the time.